“Thank you for being honest with me,” Belarusian President Alexander Lukashenko told Margarita Simonyan, the founder of RT, earlier this month.

RT, an English-language television network, is accused by many Western critics of spreading the pro-Kremlin party line.

Simonyan arrived in the Belarusian capital, Minsk, with top anchors from three Russian television networks, and on September 8, Lukashenko gave them a marathon, almost two-hour interview, his first since the August 9 presidential election.

Lukashenko, a former collective farm chairman with a grey combover and a chevron moustache, claims to have won the election – his sixth since 1994 – with 80 percent of the vote.

But up to 200,000 Belarusians have been rallying almost daily, protesting against what they say was a rigged vote and shaking the ex-Soviet nation of 9.5 million.

The Kremlin threatened to use force to quell the protests, provided a $1.5bn loan to Lukashenko – and dispatched teams of seasoned spin doctors to “improve” the coverage of the protests on Belarusian television after scores of local journalists quit in protest.

“I asked Russians – give us two-three groups of journalists, just in case. It’s six or nine people from the most advanced television networks,” Lukashenko said on August 21 while addressing a group of farmers, his remaining support base after workers from state-managed plants and factories joined the protests and started dozens of strikes.

The first RT news truck was spotted in Minsk on August 18 and other Russian news crews arrived days later.

“They obviously were hired to patch a hole after [local] experts left, and then Russia started building a media campaign for Belarus,” researcher Nikolay Mitrokhin of Germany’s Bremen University told Al Jazeera.

Average Belarusians immediately noticed the dramatic difference in the editing, tone and tenor of television reports on the protests. 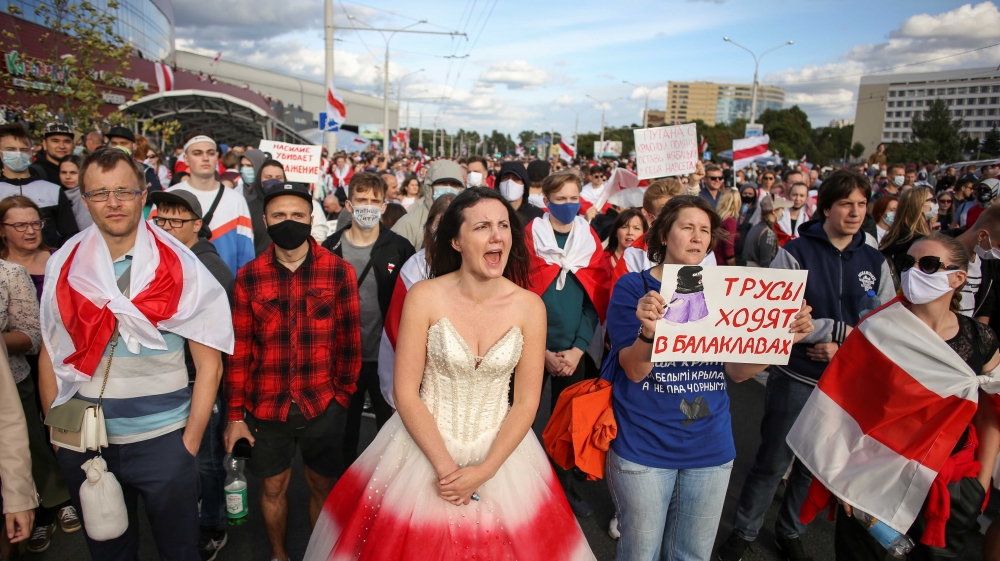 Up to 200,000 Belarusians have been rallying almost daily against Lukashenko [Tut.By/Reuters]

“The level of hate rose incredibly,” Alex, a resident of Minsk who withheld his last name, told Al Jazeera. “And they frequently call Belarus Belorussia,” or White Russia, an exclusively Russian way of calling its neighbour, he said.

The new reports unexpectedly referred to Lukashenko as Batka (Big Daddy), a nickname used mostly in Russia and shunned by reporters with Belarusian state-run media. They also began accusing the United States of organising the protests – and coordinating them from Poland, Lithuania and the Czech Republic.

They filled their coverage and analysis with terms such as “colour revolutions,” a Kremlin term for pro-Western uprisings in Ukraine, Georgia and Kyrgyzstan, and “foreign agent,” widely used by Russian officials and state-run media to describe foreign-funded NGOs and rights groups.

Media professionals have dismissed the quality of the Russian coverage.

What helps the Russian media teams is that most Belarusians are native Russian speakers, and have for decades watched Russian television.

During his rule that began in 1994, Lukashenko helped the Russification, and dismissed the Belarusian language as retrograde.

In Russia, pro-Kremlin networks also changed their coverage to reflect Lukashenko’s own u-turn; before the August 9 vote, he built his election campaign on an anti-Russian hysteria accusing the Kremlin of trying to annex Belarus.

Russian TV teams stand untouched in the middle of mayhem during the opposition rallies, when heavily-armed riot police beat up and detain protesters and independent journalists, according to media reports, photos and footage by Nexta, an independent Telegram channel that serves as the main source of information on the protests.

However, one team from Simonyan’s RT got arrested, beaten up and starved for three days. But their boss preferred to turn a blind eye.

“They were detained, a day went by, two, three. They were not fed. Beaten. That’s what you have to work out,” Simonyan told Lukashenko during the interview with a smile.

“Let’s close the books on this incident,” Lukashenko answered after a short pause. 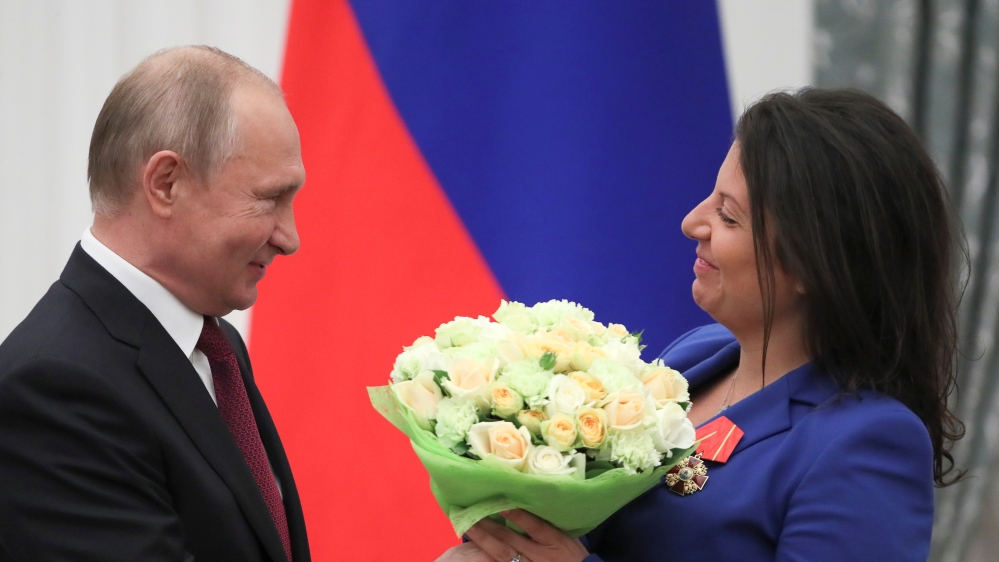 Russia’s President Vladimir Putin presents flowers to editor-in-chief of Russian broadcaster RT Margarita Simonyan after decorating her with the Order of Alexander Nevsky during a ceremony at the Kremlin in Moscow, Russia [File: Evgenia Novozhenina/Reuters]

Lukashenko thanked Simonyan for “honesty,” but her own comments and observations contradict the reality of Belarusian cities, where tens or even hundreds of thousands march daily.

“I don’t see any protesters – there are none,” Simonyan said during a live cross from Minsk. “I’m not going to look for them knocking on doors.”

“This is an interview for just one viewer,” namely, Putin, said Tikhon Dzyadko, an anchor with Dozhd TV, one of Russia’s last remaining independent networks.

“It was supposed to help a vassal before his meeting with a suzerain.”

Putin is apparently alarmed by what is happening in Russia’s western backyard, in the nation that the Kremlin until recently viewed as a bastion of unshakeable autocracy.

The arrival of Russian “media advisers” could very well be the Kremlin’s attempt to prevent what may one day happen in Russia, critics say.

“If Belarus collapses today, Russia will be next,” he told Simonyan during the interview.