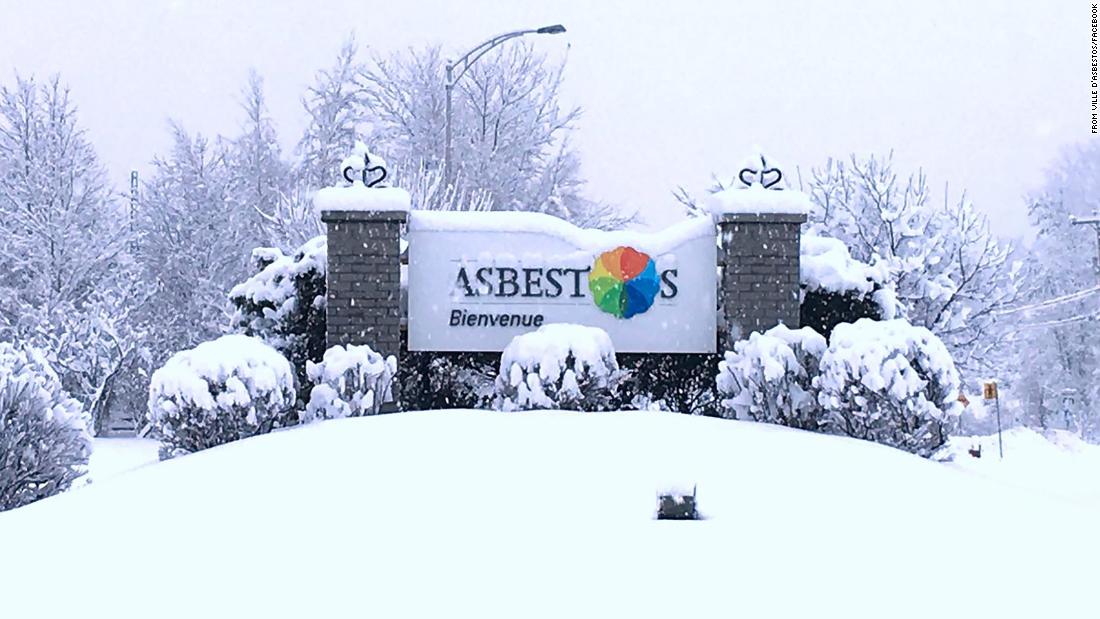 (CNN) — You’d think anything would be better than having your town named after a highly toxic building material, but the residents of Asbestos, Canada, might disagree.

The townspeople in this unusually monikered Quebecois city will vote in October on a new town name, as the negative connotations have long been hindering business and tourism endeavors.

The choices selected by the municipal council, however, are proving controversial.

The city initially grew from the development of an asbestos mine around a large deposit of the substance discovered there in 1897. For decades, the town thrived on asbestos mining and product manufacturing.

Asbestos is a naturally occurring, but very toxic, substance once widely used for insulation. It’s been banned in Canada since 2018.

When inhaled or ingested, asbestos fibers can become trapped in the body, and may eventually cause genetic damage to the body’s cells. Exposure may also cause mesothelioma, a rare and aggressive form of cancer.
Having reviewed hundreds of suggestions, on September 14 the council unveiled the four proposals that made the cut: Apalone, Jeffrey, Phénix and Trois-Lacs.

All residents over the age of 14 will be allowed to vote on the new name between October 14 and 18.

“I am very happy with the approach we have adopted throughout the process and especially with the involvement of our population. I invite our citizens to come and vote in large numbers!,” said Mayor Hugues Grimard in a statement.

In this Francophone town, “ridicule!” (“ridiculous!”) is a recurring word in the comments.

Apalone, which is in honor of an indigenous species of turtle, was suggested by Greenpeace Canada. Lyne Dion isn’t impressed, writing: “I wouldn’t be proud to say that I live in a soft turtle city.”

Jeffrey refers to W. H. Jeffrey, who bankrolled the town’s Jeffrey asbestos mine.

Critics argue that this would be continuing to shackle the town to its asbestos legacy and also honoring the money men indirectly linked to the deaths of many workers.

Phénix — Phoenix in English — is a simple reference to the mythic bird of rebirth. Without any connection to local history, this also has proved an unsatisfying choice to many voters.

There have been cries on social media complaining of a “lack of transparency” regarding the council’s choices.

The ruckus has been such that the City of Asbestos’ general manager Georges-André Gagné was forced on September 16 to issue a second statement addressing the fact that “some people have expressed their disagreement with the names proposed” and “calling for a constructive and respectful debate.”

Alexandre Côte spoke for several of the most vocal residents when he wrote on Facebook, “Honestly, it’s a setup to get Trois-Lacs! The rest of the names are really awful.”

However, the name Trois-Lacs — after a local lake labeled by Le Journal de Montréal as “one of the worst in Quebec” — isn’t proving hugely popular either.

All the kerfuffle has some residents declaring that they want to keep the town name as it is, toxic history be damned.

Said Ginette Frichette, “I’m against the name change. I was born in Asbestos and I want to die in Asbestos.”

CNN’s Elizabeth Wolfe and Brian Ries contributed to this report.