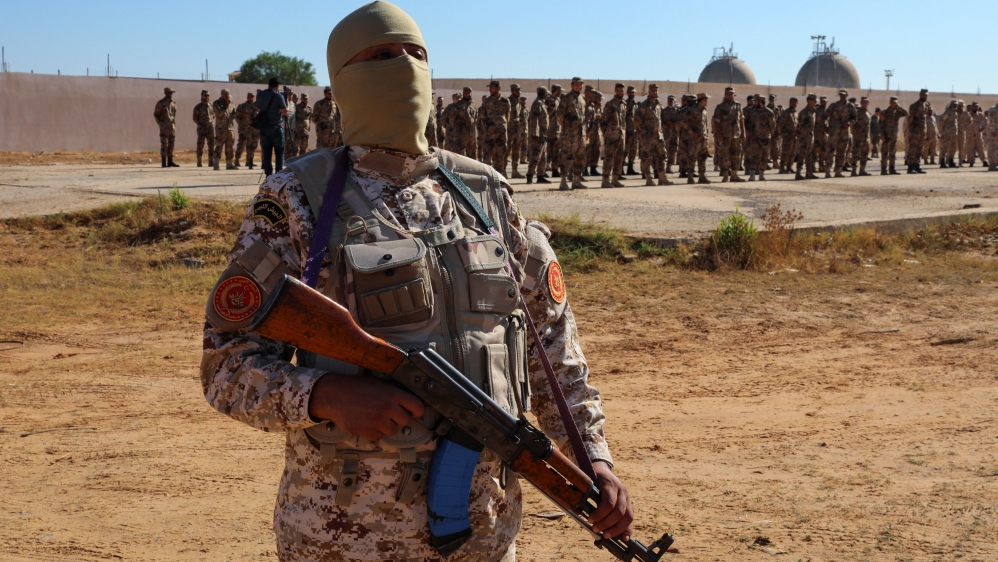 Libya’s renegade military commander Khalifa Haftar has announced a conditional lifting of a months-long blockade on oilfields and ports by his forces.

In January, backers of Haftar, the commander of the self-styled Libyan National Army (LNA), shut down the country’s oilfields and terminals in a bid to put pressure on their rivals, the UN-recognised Tripoli-based Government of National Accord (GNA).

The blockade caused severe losses in Libya, as oil is the country’s main source of income.

“We have decided to resume oil production and export on condition of a fair distribution of revenues” and guarantee they “will not be used to support terrorism”, Haftar said on television on Friday.

Pro-Haftar groups supported by the Petroleum Facilities Guard blockaded key oilfields and export terminals on January 17 to demand what they called a fair share of hydrocarbon revenues.

The blockade, which has resulted in more than $9.8bn in lost revenue according to National Petroleum Company (NOC), has exacerbated electricity and fuel shortages in the country.

Haftar said the command of his forces had “put aside all military and political considerations” to respond to the “deterioration of living conditions” in Libya, which has Africa’s largest oil reserves.

The announcement comes after hundreds of Libyans protested last week in the eastern city of Benghazi, one of Haftar’s strongholds, and other cities over corruption, power cuts and shortages in petrol and cash.

Protesting peacefully at first, protesters set fire to the headquarters of the parallel eastern government in Benghazi on Sunday and attacked the police station in Al-Marj.

Police officers fired live ammunition to disperse them in Al-Marj, killing at least one person and wounding many, according to witnesses and the UN mission in Libya.

Libya has been in chaos since a NATO-backed uprising toppled and killed longtime dictator Muammar Gaddafi in 2011.

The country’s oil revenues are managed by the NOC and the central bank, both based in Tripoli.

Haftar – who has the backing of Egypt, the United Arab Emirates and Russia – launched an offensive against Tripoli in April last year.

After 14 months of fierce fighting, pro-GNA forces backed by Turkey expelled his troops from much of western Libya and pushed them to Sirte, the gateway to Libya’s rich oilfields and export terminals.