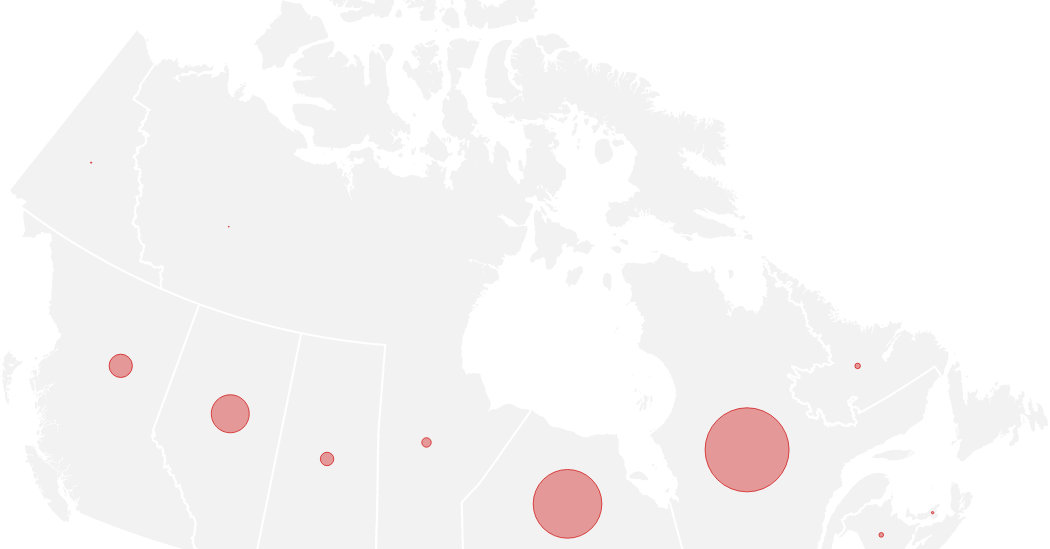 There have been at least 142,700 confirmed cases of coronavirus in Canada, according to the Public Health Agency. As of Sunday afternoon, at least 9,211 people had died.

Double-click to zoom into the map.

Use two fingers to pan and zoom. Tap for details.

Source: Public Health Agency of Canada. Circles are sized by the number of people there who have tested positive, which may differ from where they contracted the illness.

Here’s how the number of cases and deaths are growing in Canada:

Reported cases and deaths by province

This table is sorted by places with the most cases per 100,000 residents in the last seven days. Select deaths or a different column header to sort by different data.

Canada’s first known case of coronavirus appeared on Jan. 25. A man who had returned to Toronto from Wuhan, China tested positive for the virus. His wife tested positive a day later.

Quebec soon became the province most severely affected, likely because its winter school break, which saw many families travel to the southern United States and other warm weather destinations, occurred two weeks before provincial lockdown measures began to sweep the country in mid-March.

On March 21, Canada closed its border with the United States, with exceptions for freight movements and some essential workers. It was the first time the entire border had been shut since Canada became a nation in 1867.

For the most part, the handling of the virus outbreak has not become a partisan or politicized issue and politicians have generally deferred to public health officials about how to handle it. While some provinces began easing some restrictions in early May, Prime Minister Justin Trudeau has repeatedly said that a substantial relaxation remains at least weeks and possibly months away.

How Cases Are Growing

Here’s how the number of new cases and deaths are changing over time:

Note: The seven-day average is the average of a day and the previous six days of data.

Note: Scale for deaths chart is adjusted from cases chart to display trend.

The New York Times has found that official tallies in the United States and in more than a dozen other countries have undercounted deaths during the coronavirus outbreak because of limited testing availability.

Where You Can Find More Information

Read more about nurses who commute from Ontario to work in Detroit hospitals and a Quebec retirement home where 31 residents were found dead. Prime Minister Justin Trudeau, who found himself in isolation at home after his wife tested positive for the virus, was forced to backtrack on one of his more controversial measures for asylum seekers.

Here is where you can find more detailed information:

The Public Health Agency of Canada pulls together data from provinces along with general guidelines and health advice for Canadians.

The government of Canada also provides links to information on various federal economic support programs for workers and businesses affected by the pandemic and the shutdown. The government-run Wellness Together Canada offers online support for people suffering from mental health and substance abuse issues.

Governments often revise data or report a single-day large increase in cases or deaths from unspecified days without historical revisions, which can cause an irregular pattern in the daily reported figures. The Times is excluding these anomalies from seven-day averages when possible.