Former Canadian Prime Minister John Turner, who was in office for just 11 weeks and led his Liberal Party to a massive electoral defeat in 1984, died on Saturday aged 91.

Turner, who had previously held the posts of finance and justice minister, took over from Pierre Trudeau in late June 1984 at a time of increasing voter fatigue with the Liberals, who had been in power for 20 of the previous 21 years.

Marc Kealey, a former aide speaking on behalf of Turner´s relatives as a family friend, said Turner died peacefully in his sleep at home in Toronto on Friday night.

Turner failed to live up to the great expectations of his early career, serving as prime minister for just 79 days in 1984 after a difficult, decades-long climb to the top job. 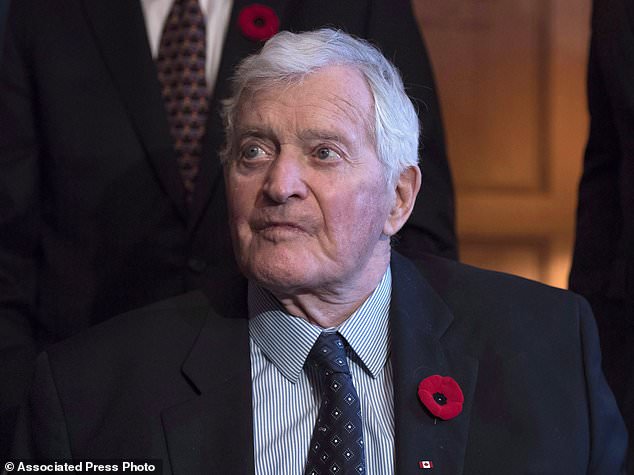 Former Canadian Prime Minister John Turner has died at the age of 91. He is pictured here at an event in November 2017 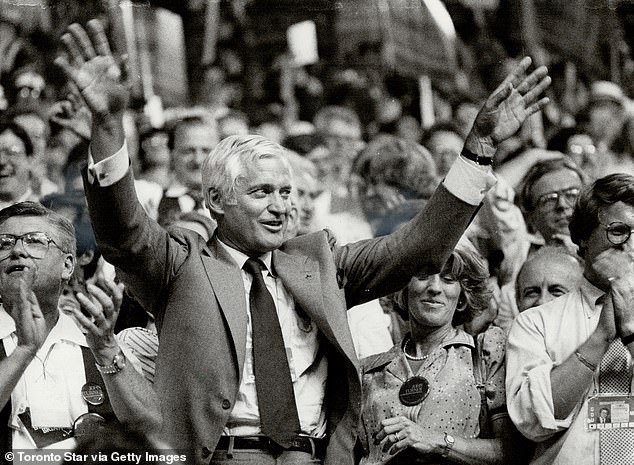 A track star, Turner graduated from the University of British Columbia in 1949, winning a Rhodes scholarship to Oxford University. After studying law, he went to Paris to work on a doctorate at the Sorbonne.

The young lawyer caused a stir when he danced with Princess Margaret at a party in 1959, giving rise to speculation that the two would become a couple. The two remained friends for life.

Turner moved to Montreal to practice law but was lured into politics in 1962.

As justice minister in Prime Minister Pierre Trudeau´s Cabinet from 1968 to 1972, Turner proposed a national legal aid system – an issue close to his heart – and created the Federal Court, among other reforms. He defended the decriminalization of homosexuality and abortion in the 1960s

He was named finance minister in 1972 and held the job for three turbulent years, marked by high unemployment and high rates of inflation.

A lawyer by training, Turner served as finance minister from 1972 to 1975 but quit amid disagreements over policy with Trudeau. He returned to legal work for nine years before winning the Liberal Party leadership in June 1984.

He took over from Pierre Trudeau in late June 1984 at a time of increasing voter fatigue with the Liberals, who had been in power for 20 of the previous 21 years. 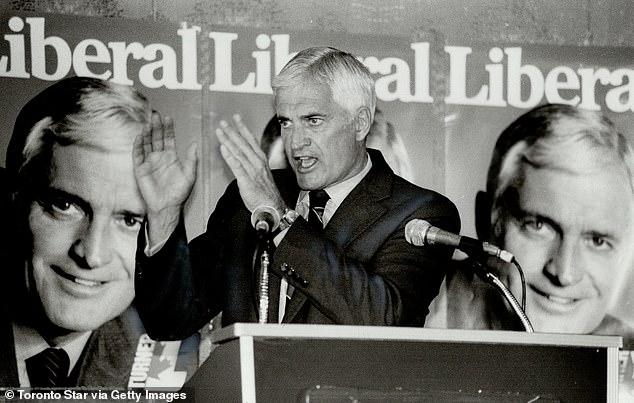 He called an election for September and then presided over what many political observers consider to be one of the worst campaigns in Canadian history, marred by a series of gaffes.

One key turning point came during a televised debate when Turner, under fire from Conservative leader Brian Mulroney, said he had no option but to approve a mass of patronage appointments proposed by Trudeau before he left office.

“You could have said ‘I am not going to do it. This is wrong for Canada’ … you had an option, sir, to say no. And you chose to say yes,” responded Mulroney in one of the most memorable moments in Canadian politics. The Conservatives swept to power with 211 seats of the 282 in the House of Commons.

The Liberals fell to just 40 seats from 135 but Turner hung onto his position. His 79-day tenure as prime minister is the second shortest in Canadian history.

In the 1988 election campaign he took a strong stance against a proposed free trade agreement with the United States but lost again to Mulroney, although not as badly.

He resigned as Liberal leader in 1990 and was replaced by Jean Chretien, who led the Liberals to victory in 1993.

Turner is survived by his wife Geills and four children.