Hurricane Teddy was downgraded to a Category 2 storm on Sunday morning. Teddy is on path toward the Atlantic Canada.

The coast of North Carolina is expected to have life-threatening rip currents over the next couple of days because of Teddy. If you are headed to the beach, make sure to swim near a life guard. If you do get caught in a rip current, don’t panic and swim parallel to the shore.

Coastal flooding is likely in the Outer Banks and on Cape Hatteras Island from Teddy. The National Weather Service shows the potential for 14 to 17 foot seas on Sunday which could create dangerous driving conditions on N.C. Highway 12, according to Dare County Emergency Management.

The highway closed in both directions on Sunday morning just south of the Ocracoke Ferry dock to the north of the Pony Pen beach area. The road is expected to reopen by 5 p.m.

Drivers are encouraged to avoid the area until Monday.

Tropical Storm Beta is in the Gulf of Mexico and inching toward Texas and Louisiana. The storm is moving at about 3 mph, which is nearly stationary.

Beta is expected to bring intense rainfall for extended periods of time and flood the coast because of how slow the storm is moving.

Rain from the storm has already began flooding the coast of Texas.

Outer bands of the storm will continue to impact the Gulf States on Saturday and the Florida panhandle. 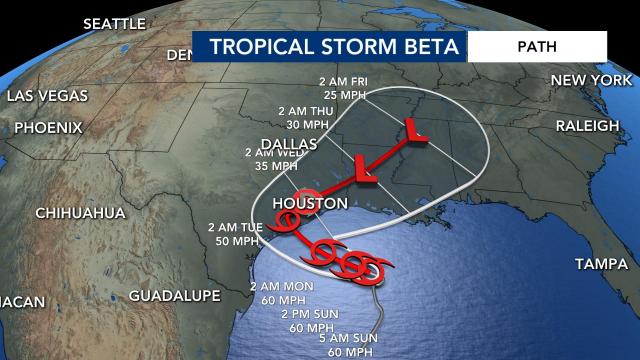 This storm make landfall in Texas by Monday night or Tuesday morning somewhere between Houston Texas and Corpus Christi. About 8 to12 inches of rain is expected to come to those areas of Texas before the storm moves northeast.

Some areas of Texas could see 20 inches of rain.

Rainfall is expected to spread northward into the lower Mississippi River Valley by mid-week where flash, urban and river flooding is possible, according to the latest update from the National Hurricane Center.

Life-threatening storms surges are a danger on the coast of Texas and Louisiana.

In North Carolina, we could see remanent moisture from the storm and increased rain chances. We will likely feel this on Friday.

Tropical Storm Wilfred is forecast to die down in the next couple days. Right now, the storm is more than 1,200 miles away from the Lesser Antilles.

For only the second time in recorded history, all of the possible hurricane names have been used up this season, and we still have 10 weeks to go. We will now switch into using the Greek alphabet for names.