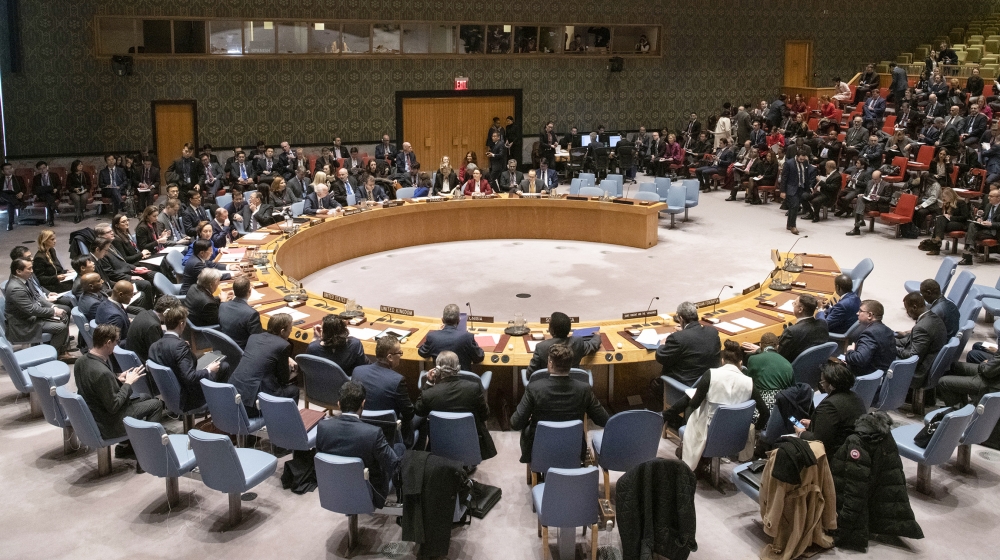 Tehran, Iran – The United States has broken with all other permanent members of the United Nations Security Council and unilaterally declared the re-imposition of all UN sanctions against Iran – a claim rejected by Iran and the international community, including Washington’s close allies, as having no legal basis.

In a statement on Sunday following the expiration of a deadline set by the US, Secretary of State Mike Pompeo threatened “consequences” for any UN member state that does not comply with the punitive measures, which were lifted under a landmark nuclear deal that was signed between six world powers and Iran in 2015 but was abandoned by the US more than two years ago.

In addition to adhering to a conventional arms embargo that is due to expire next month, Pompeo said member states must comply with restrictions such as the ban on Iran engaging in nuclear enrichment and reprocessing-related activities; the prohibition on ballistic missile testing and development; and sanctions on transfer of nuclear and missile-related technologies.

“If UN Member States fail to fulfil their obligations to implement these sanctions, the United States is prepared to use our domestic authorities to impose consequences for those failures and ensure that Iran does not reap the benefits of UN-prohibited activity,” Pompeo said.

.@SecPompeo: In accordance with our rights under resolution 2231, the United States initiated the snapback process to restore virtually all previously lifted UN sanctions, including the embargo. The world will be safer as a result. https://t.co/Yg8SC0mp9j

His statement came a month after the US officially triggered the process aimed at restoring all UN sanctions on Iran, claiming significant Iranian violations of the Joint Comprehensive Plan for Action (JCPOA), the formal name for the 2015 deal that was endorsed by the Security Council.

Despite the US in May 2018 pulling out of the deal and reimposing crippling sanctions on Iran, Washington argues it is still technically a “participant” and could trigger the so-called “snapback”. This was a mechanism devised by the US negotiating team before the signing of the JCPOA that stipulated that if Iran breached its commitments, all international sanctions could snap back into place.

However, the international community, including the four other permanent Security Council members, insist the US no longer has the legal ability to force through any changes since it announced its exit from what Trump has branded “the worst deal ever” with a presidential memorandum titled Ceasing US Participation in the JCPOA.

Iranian President Hassan Rouhani addressed the nation directly in a live televised cabinet meeting on Sunday. He congratulated world powers since US pressure to reinstate UN sanctions “has reached its definitive point of failure”.

Today, he said, “will be a memorable day in the history of our country’s diplomacy”.

Rouhani added should the US try to “bully” others into adhering to its declaration of reinstating UN sanctions, Iran will have a “decisive response” to match.

Pointing out how the US tried to garner the support of other nuclear deal signatories following its unilateral withdrawal from the nuclear deal, Rouhani said the United States expected Iran to act irrationally, giving it an excuse to form an international coalition against the Islamic Republic.

“Today we can say the ‘maximum pressure’ of US against the Iranian nation, politically and legally, has turned to ‘maximum isolation’ for the US.”

The president also addressed the five remaining signatories of the nuclear deal, reiterating the promise that if they fully adhere to their commitments under the accord, Iran will also fully implement its commitments.

Exactly one year after the US abandoned the nuclear deal, Iran started gradually scaling down its commitments, including those concerning its stockpile of enriched uranium. Iran still continues to grant access to the International Atomic Energy Agency (IAEA).

In a letter to the Security Council, the European signatories to the deal – Britain, France and Germany, or E3 – stressed UN sanctions relief for Iran would continue, adding any decision or action to reimpose them “would be incapable of legal effect”.

UN Secretary-General Antonio Guterres also told the council he would not take any action on the US declaration because “there would appear to be uncertainty whether or not any process … was indeed initiated”.

On Sunday morning, Iranian Foreign Ministry spokesman Saeed Khatibzadeh told reporters the US is experiencing some of its “most bitter” times as it has chosen to stand “on the wrong side of history”.

According to Hamidreza Azizi, a visiting fellow at the German Institute for International and Security Affairs (SWP), there are clear reasons why the European powers, as well as Russia and China, oppose the US demand.

“First, it would pave the way for further arbitrary interpretation of international treaties by Washington, that may one day come back to haunt the Europeans themselves,” Azizi told Al Jazeera.

“Second, Iran’s reaction to sanctions return would be to leave the JCPOA or even NPT,” he added, referring to the international nuclear Non-Proliferation Treaty that pursues nuclear disarmament.

As to why the US would engage in such a move based on shaky legal arguments, Azizi says its goal is political.

“It wants to keep Iran under the international spotlight, continuing to introduce the Islamic Republic as a threat to international peace and security,” he said, adding that the US also wants to make Europeans more cautious in dealing with Iran.

According to Azizi, the snapback showdown is the latest and most evident sign of a rift in transatlantic relations.

“Especially if Trump gets re-elected as the US president, this will work as fuel for further disagreements between the EU and the US,” he said, pointing out that Russia and China could use the opportunity to expand their influence in Iran and the wider region.

The US attempt to trigger the snapback mechanism came on the heels of another demand it made at the Security Council that left it isolated.

In mid-August, the council resoundingly rejected a US bid to extend a global arms embargo on Iran that expires on October 18 under the JCPOA.

Washington only managed to secure the support of the Dominican Republic for its proposed resolution to indefinitely extend the embargo, leaving it far short of the minimum nine “Yes” votes required for adoption. Eleven members abstained while China and Russia opposed the resolution.

Last week, Pompeo reiterated during a briefing with UK Foreign Secretary Dominic Raab that the US will move to reinstate UN sanctions to make the arms embargo permanent.

The US will “do its share as part of its responsibilities to enable peace, this time in the Middle East”, he said.

Zarif fired off a tweet on Thursday, saying “nothing new happens on 9/20”. He also alluded to two recent opinion pieces by John Bolton, Trump’s former national security adviser, who had pointed out that the nuclear deal’s dispute resolution clauses are “complex and potentially lengthy” to avoid UNSC confrontations.

Citing unnamed sources, Reuters news agency reported on Friday that Trump is planning to issue an executive order in the coming days to impose secondary sanctions on anyone who would buy or sell arms to Iran, depriving them of access to the US market.

The culmination of the snapback showdown comes shortly after a fresh round of threatening rhetoric being exchanged between longtime foes, the US and Iran.

On September 13, US-based media outlet Politico published a report, citing unnamed officials, that the Iranian government is weighing an assassination attempt against Lana Marks, the US ambassador to South Africa.

The plot, the report claimed, would be executed in retaliation for Washington’s assassination of top Iranian general Qassem Soleimani in Iraq in early January.

In a tweet, Trump, who is seeking re-election on November 3, said the US will retaliate with “1,000 times greater” force against any Iranian attack on its interests.

In response, Iran cautioned the US against making “a new strategic mistake” by believing false reports and warned of a “decisive response”.

On Saturday, the head of Iran’s elite Islamic Revolutionary Guard Corps issued a stern warning directly addressing Trump, saying the killing of Soleimani will be avenged but Marks is not a proportionate target.

“We will target those who were directly or indirectly involved in the martyrdom of this great man,” Major-General Hossein Salami said.

On Friday, South Africa’s State Security Agency said in a statement there is insufficient evidence to sustain the allegation of a plot to assassinate Marks.