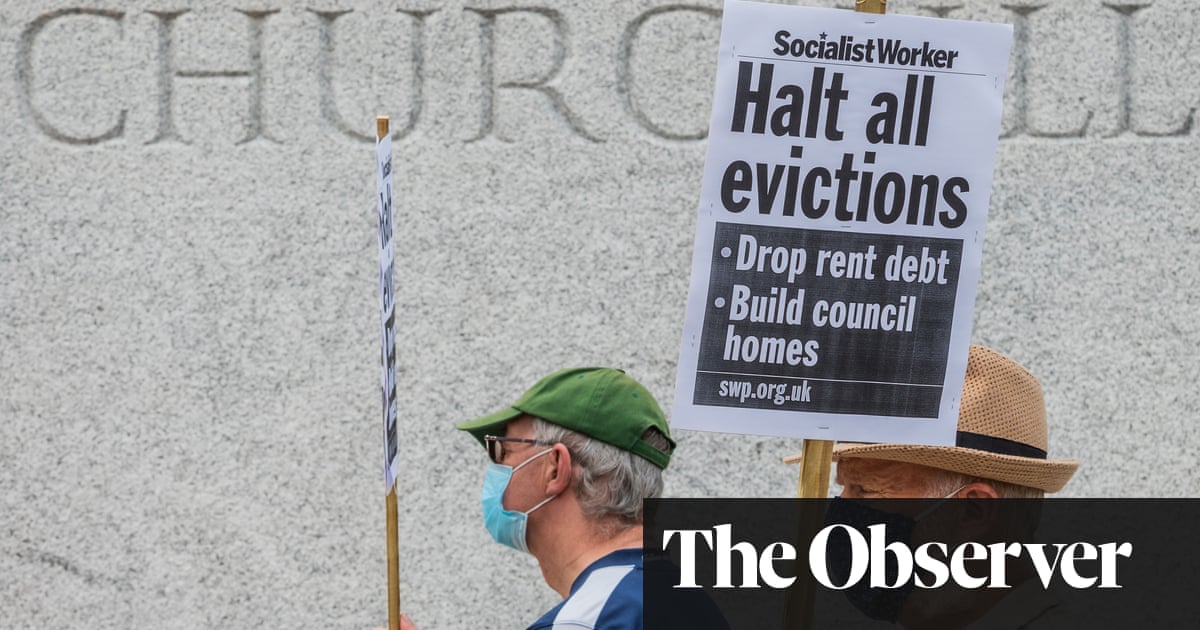 Tens of thousands of struggling private renters need new legal protections and emergency financial aid to prevent a rise in homelessness when a ban on evictions ends on Monday, ministers have been warned.

As many as 55,000 private renters are thought to have been given an eviction notice between March and August and to be at risk when the ban comes to an end tomorrow. Cash-strapped councils fear they will be left to pick up the bill from any increase in homelessness that emerges in the coming months.

About 200 judges have been given training to deal with housing cases as the courts prepare to deal with the backlog. The government has said that the most egregious cases will be prioritised.

However, campaign groups are warning that thousands of tenants have missed out on new legal protections that slow down the eviction process, while others will be evicted because judges are given no discretion in some housing cases.

Robert Jenrick, the housing secretary, promised earlier this year that no renter who had lost income as a result of coronavirus would lose their home. However, the economic shock of the pandemic has seen hundreds of thousands of private tenants build up rent arrears. The issue has prompted an attempt to defeat the government in the Lords this week.

While anyone served with an eviction notice since the end of August has been given a six-month notice period, anyone who was served a notice from March to August has not been given that protection. The campaign group Generation Rent estimates as many as 55,000 could be in this group. This week, the Liberal Democrat peer Baroness Grender will attempt to block the evictions process from going ahead until the issue has been properly addressed by parliament.

David Walker, the bishop of Manchester, said in an email that he had not seen sufficient evidence that it was now safe to restart the evictions process: “Moreover, with infections rates rising, and the likelihood of more people having to self-isolate (or take time off work to care for children sent home because of Covid in their ‘bubble’), now is not the time to remove protection for one of the most crucial aspects of our life – our home.”

Polly Neate, the chief executive of Shelter, said: “More than 300,000 private renters have fallen behind on their rent since the pandemic hit. And while some of the short-term protections – like longer notice periods – are welcome, they don’t apply to everyone, nor do they stop people getting deeper into debt. If the government is dead set on lifting the evictions ban, then the best shot it can give struggling renters to keep hold of their homes is with emergency funds to clear Covid arrears.”

Councils are braced for the fallout. David Renard, the Tory leader of Swindon council and the housing spokesman for the Local Government Association, said: “Councils will continue to do everything they can to help tenants who are in financial difficulty and cope with the likely increase in those seeking housing support. However, they face significant homelessness pressures which have been exacerbated by the pandemic.

“The government should bring forward its pledge to end ‘no-fault evictions’, as well as commit to maintaining local housing allowance rates at the lowest third of market rents beyond the period it has committed to.”

The housing lawyer Giles Peaker said: “I don’t think that what the government has done frankly satisfies anybody, because landlords are staring at a six-month notice period, which is infuriating them – but nothing is being done to actually deal with the underlying problems. For organisations like Shelter, Crisis and Generation Rent, they’re just seeing the problem being delayed, which is probably right.”

A spokesperson for the government said: “We’ve taken unprecedented action to support renters by banning evictions for six months, preventing people getting into financial hardship and helping businesses to pay salaries. To help keep people in their homes over the winter months, we’ve changed the law to increase notice periods to six months and introduced a ‘winter truce’ on the enforcement of evictions for the first time.

“In addition we have put in place a welfare safety net of nearly £9.3bn and increased Local Housing Allowance rates to cover the lowest 30% of market rents.”