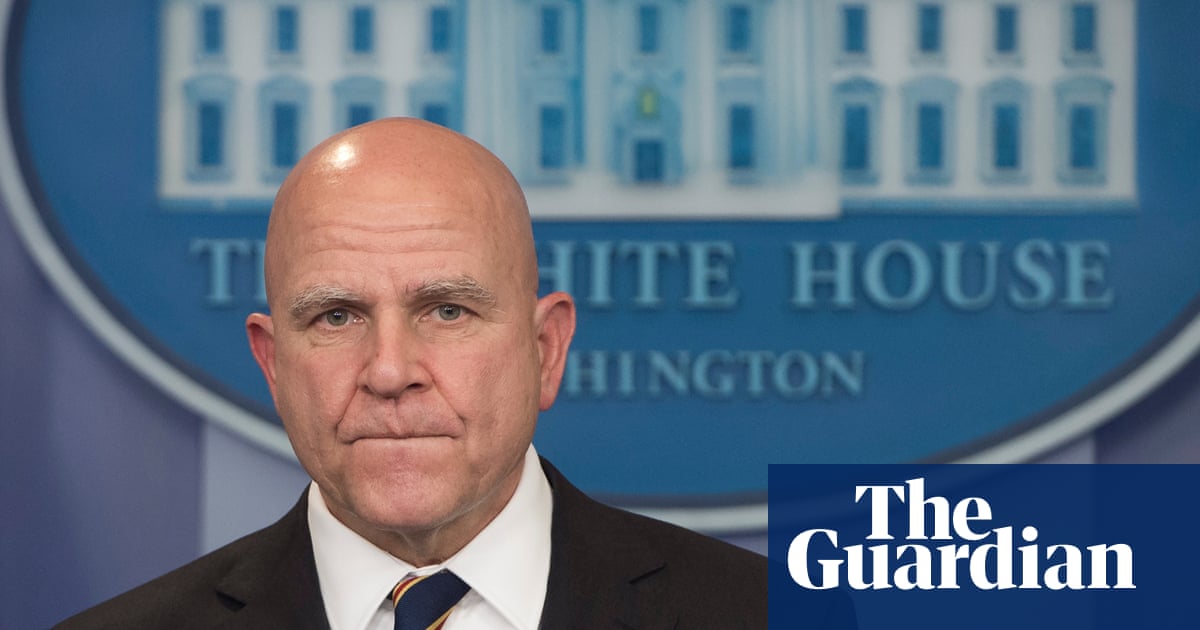 HR McMaster was not trying to save the world from Donald Trump when he became his second national security adviser, the retired general said in his first interview to promote his new book – if his second since leaving the White House.

“It was my duty to help the president come to his own decisions,” McMaster told CBS 60 Minutes on Sunday night, setting himself apart from other White House aides and a string of senior military figures, including former defense secretary James Mattis, who have publicly criticised the president.

But McMaster did criticise aspects of foreign policy including the pursuit of peace talks with the Taliban in Afghanistan and rejected Trump’s claim that climate change is a hoax. Asked if his experience told him Trump “might make a decision, but it’s not likely to stick”, McMaster said: “Well, yeah, that’s exactly what was my experience.”

McMaster also described how he reacted with “surprise, disappointment, disbelief” when in 2017 Trump told reporters he believed Vladimir Putin when he denied interfering in the 2016 US election.

“Every time he sees me,” Trump said then of the Russian president, “he says, ‘I didn’t do that,’ and I really believe that when he tells me that. He means it.”

“Well,” said McMaster, “my reaction was one of surprise, disappointment, disbelief.”

McMaster said he and other advisers “had a conversation with the president afterwards, we said, ‘Your answer to that question will be misconstrued as a complete denial of Russian meddling when we know it’s incontrovertible. It’s just, it’s just a fact.’”

Trump did retract his statement – a rare occurrence – but he has cast doubt on intelligence community conclusions and agreed with Putin since.

McMaster also told CBS how the hashtag #FireMcMaster, which proliferated on social media before Trump fired him, was partly fueled by Russia.

“It was a combination of … these sorts of people who saw me as an impediment to their agenda. And it was a campaign that started domestically, but then was reinforced by an adversary, reinforced by the Kremlin.

“[The Russians] were full participants in it, but I don’t think they started it. But many people who operate, you know, in this sort of venomous, you know, social media environment and bloggers and the pseudo-media. They’re the ones who initiated the campaign.”

Regarding Afghanistan, McMaster said Trump was “in effect … partnering with the Taliban against, in many ways, the Afghan government. And so, I think that it’s an unwise policy”.

US warns Afghan women of increased risk of extremist attack

Trump aims to reduce troops in Afghanistan to around 5,000 and has announced the withdrawal of 12,000 from Germany.

“I think these are both big mistakes,” McMaster said. “I think they’re mistakes because they’re consistent with, I think, this sentiment that you see really across both political parties for retrenchment or withdrawal from complex problem sets overseas.

“We lack confidence because we haven’t had, I think, sound strategies and policies in place and Americans are losing faith in these efforts. I don’t blame them.”

McMaster’s new book, Battlegrounds, is not a Trump book. He writes at its outset that some people wanted him to write such a memoir, perhaps in the mould of The Room Where It Happened by his successor John Bolton, a bestseller which detailed Trump’s behaviour and which has drawn a furious legal response from the White House.

Trump’s brutal treatment of McMaster is documented in the vast corpus of Trump books. For example, the president reportedly complained his national security adviser was boring and “looked like a beer salesman” when he showed up for work in a suit, rather than full uniform.