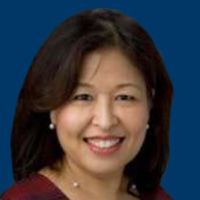 Results showed that the objective response rate (ORR) with the combination per RECIST v1.1 criteria and blinded independent central review (BICR) was 29.0% (95% CI, 14.2%-48.0%) in 31 patients with triple-negative breast cancer (TNBC) who received treatment in the second- or third-line setting. The ORR was even higher, at 32.3% (95% CI, 16.7%-51.4%) in 21 patients with ovarian cancer who received the combination as their fourth line of treatment.

“The prespecified futility efficacy criteria for cohort expansion were met and toxicity was manageable in all cohorts,” Zarnie Lwin, MD, lead investigator of the trial and medical oncologist in the Department of Medical Oncology at the Royal Brisbane and Women’s Hospital, of the University of Queensland, in Australia, said in a virtual presentation during the meeting. “LEAP-005 will continue to assess the efficacy and safety of lenvatinib plus pembrolizumab in patients with previously treated advanced solid tumors in expanded cohorts of 100 patients each.”

Investigators hypothesized that the combination of the antiangiogenic multikinase inhibitor lenvatinib with the PD-1 immunotherapy pembrolizumab would result in dual immunomodulatory effects.2 The combination has already demonstrated encouraging antitumor activity in early-phase trials done in patients with several cancers.3

In September 2019, lenvatinib plus pembrolizumab received regulatory approval from the FDA for use in patients with previously treated advanced endometrial cancer that was not microsatellite instability–high (MSI-H)/or mismatch repair deficient (dMMR) who were not candidates for curative surgery or radiation. The decision was based on data from a study comprised of 94 patients and the combination elicited an ORR of 38.8%.4

In the multicenter, open-label phase 2 trial, investigators set out to examine the safety and efficacy of lenvatinib plus pembrolizumab in patients with previously treated solid tumors. In order to be eligible for participation, patients had to be 18 years of age or older and have histologically or cytologically advanced solid tumors that fell into the following cohorts with the appropriate lines of treatment: TNBC (second or third line), ovarian (fourth line), gastric (third line), CRC (non–MSI-H/proficient MMR; third line), biliary tract (second line), and glioblastoma multiforme (second line).

Patients also had to have measurable disease per RECIST v1.1 criteria, an ECOG performance status of 0 or 1, and tissue available for PD-L1 evaluation.

A total of 30 patients were enrolled to each cohort on the study and they received pembrolizumab at an intravenous dose of 200 mg every 3 weeks in combination with lenvatinib at an oral dose of 20 mg once daily for up to 35 treatment cycles.

The primary end points of the trial were ORR per RECIST v1.1 criteria, as well as safety and tolerability. Response in the glioblastoma cohort was per RANO criteria, and all responses were evaluated by BICR. Key secondary end points included disease control rate (DCR), duration of response (DOR), and progression-free survival (PFS).

The first 187 patients were enrolled to LEAP-005 and they received at least 2 doses of the combination, said Lwin. At the time of the data cutoff, which was April 10, 2020, 13% to 48% of patients were still receiving treatment with lenvatinib/pembrolizumab. The median study follow-up, defined as the time from initiation of the study combination to data cutoff, was 8.6 months (range, 1.9-13.1).

Across the 6 cohorts examined, the median age of participants ranged from 56 years to 65 years and the majority of patients had an ECOG performance status of 1. Moreover, all patients received previous standard therapies, and some had received multiple lines. Sixty-three percent of patients (n = 20) in the CRC cohort received previous bevacizumab (Avastin), along with 61% (n = 19) in the ovarian cohort, and 3% (n = 1) in the TNBC cohort.

The best overall response achieved in the glioblastoma cohort by RANO criteria was a PR in 16.1% of patients and SD in 42%. Thirty-five percent of patients experienced disease progression in this subgroup. Moreover, the DCR was 58.1% (95% CI, 39.1%-75.5%) in these patients, and the DOR was 3.2 months.

Hypertension was the most commonly experienced adverse effect in all cohorts except for gastric cancer, where diarrhea and fatigue were the most frequently experienced toxicities. Overall, the safety profile of the combination was found to be consistent with what has previously been reported, concluded Lwin.