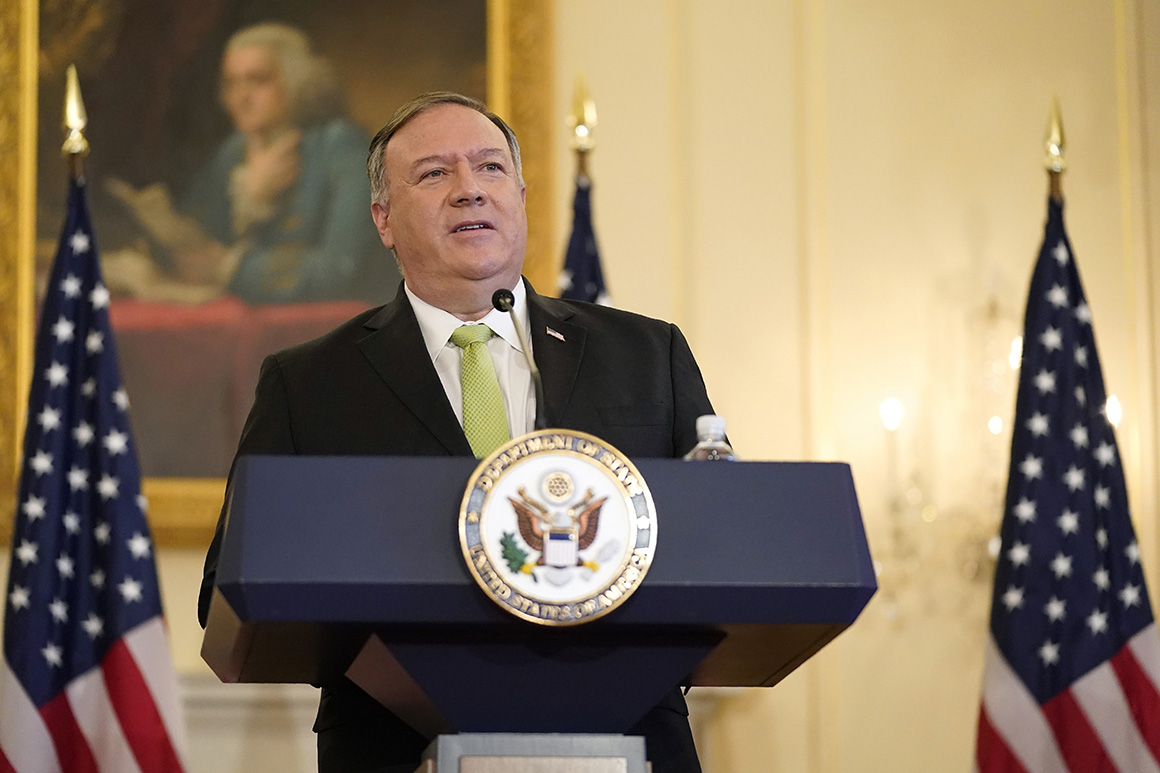 But because Trump in 2018 withdrew the United States from the nuclear deal, negotiated under former President Barack Obama, the overwhelming majority of members in the 15-nation U.N. Security Council view the administration’s efforts to bring back the sanctions as illegitimate.

At a State Department news conference on Monday, however, Secretary of State Mike Pompeo said Trump’s executive order had given the administration a “new and powerful tool to enforce the U.N. arms embargo and hold those who seek to evade U.N. sanctions accountable.”

Pompeo went on to announce the “first action under this new executive order”: U.S. sanctions targeting Iran’s Ministry of Defense and Armed Forces Logistics, as well as Venezuela’s strongman president, Nicolás Maduro — whom Pompeo accused officials in Tehran of working with to flout U.N. punishments.

“Our actions today are a warning that should be heard worldwide. No matter who you are, if you violate the U.N. arms embargo on Iran, you risk sanctions,” Pompeo said.

In his own remarks, White House national security adviser Robert O’Brien said Trump’s executive order “will result in severe economic sanctions for those nations, corporations and individuals who contribute to the supply, the sale or the transfer of conventional arms to the Islamic Republic of Iran.”

“When the United States entered into the failed Iran nuclear deal, the Obama administration told the American people that the United States would always have the right to restore U.N. sanctions on Iran, even without the approval of other nations. … President Trump is now exercising our rights to protect America and our allies,” O’Brien said.

But O’Brien failed to mention that Obama aides had discussed that right to restore sanctions under the belief that the U.S. would still be in the agreement when it did so.

U.N. Secretary-General Antonio Guterres has said the intergovernmental organization will not support reimposing sanctions on Iran. The dispute with the Trump administration comes as the U.N. General Assembly begins on Monday its annual high-level meetings, which are largely virtual this year because of the pandemic.

With fewer than 50 days to go until the November election, Trump has taken an increasingly hard line against Iran while touting his administration’s brokering of normalization agreements between Israel and a pair of Arab states.

Trump has said that if he is reelected, he will strike a pact with Iran that improves upon the 2015 nuclear deal. He told reporters last week that he had advised officials in Tehran to hold off on reaching an agreement with the U.S. until after Election Day — because Democratic presidential nominee Joe Biden would be insufficiently tough on the Iranian regime, Trump claimed.

Nahal Toosi and the Associated Press contributed to this report.