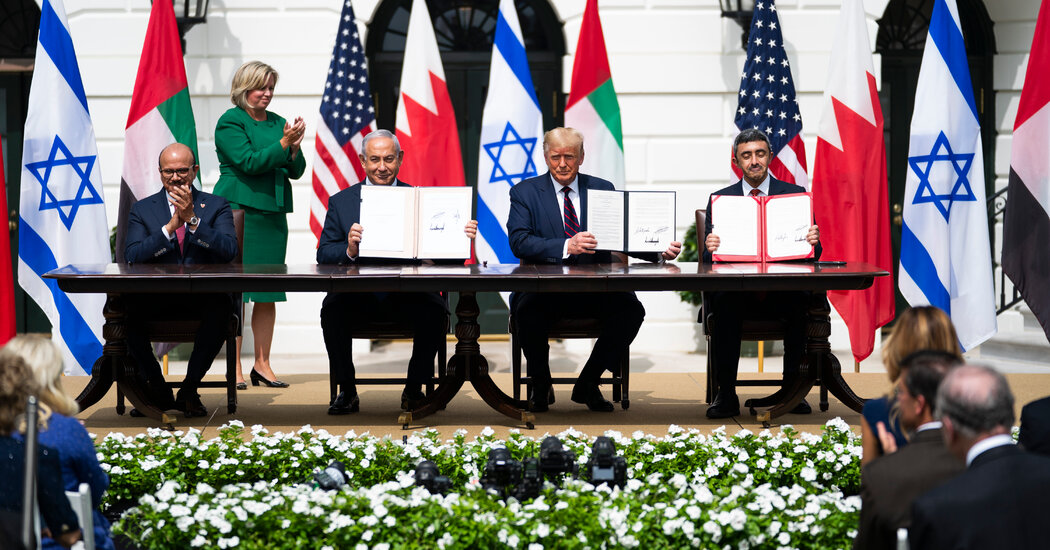 Two days after the event, his campaign released a slick, 30-second ad featuring footage from the ceremony and depicting Mr. Trump as a heroic peacemaker for bringing Israel into normalized relations with the United Arab Emirates and Bahrain.

“They said it couldn’t be done. But President Trump did it,” a narrator declares in the dramatic tones heard in Hollywood blockbuster previews. “The first Middle East peace agreement in decades.”

In an election dominated by the coronavirus pandemic, racial unrest and now a Supreme Court vacancy, the president’s Middle East deal has already faded into the endless news cycle. But the ad is the latest sign that however much Mr. Trump might value his diplomacy for its potential to reshape the region, his campaign also sees a potent political message that may not be top of mind for most voters but could move a handful of the right ones in the right places.

Trump allies say the deal resonates particularly with Jewish Americans, who are a key voting bloc in the critical swing state of Florida, and evangelical Christians, who are fervent supporters of Israel and its broadest territorial claims.

“This is an important event, not just because of the substance but because of the symbolism as well,” said Matt Brooks, the executive director of the Republican Jewish Coalition. “This shows that the president is indeed a peacemaker, he is a statesman, he has done something which successive administrations before him have been unable to do — and on a grand and historic level.”

“I think that shows to people who may not be necessarily tuned in to foreign policy that he’s got the leadership and judgment to act on a vision and have success,” Mr. Brooks added.

“Whatever their long-term meaning, I’m not sure that these deals, coming as late as they are in the middle of a pandemic and the final throes of the race, mean that much,” said David Axelrod, a former senior strategist to President Barack Obama, even before the death of Justice Ruth Bader Ginsburg on Friday. “It’s not where people are focused and voters tend to discount late-breaking announcements as part of the campaign.”

“Even for older Jewish voters in Florida, I suspect the U.A.E. and Bahrain were not foremost on their radar screen when it comes to Middle East peace,” he added. “I’m not sure it changes much.”

At a minimum, however, a slew of positive headlines about Middle East “peace” — even if it has been years since Israel had genuinely hostile relations with the Emirates or Bahrain — provided Mr. Trump with a welcome distraction from other negative news, including his admission to the journalist Bob Woodward that he had intentionally downplayed the coronavirus this year.

More significant could be Jewish and evangelical voters. Even if most Americans care little about shifting Middle East alliances, in swing states that could be decided by mere thousands of votes, such as Florida, even a slight shift within those groups could swing a close state toward Mr. Trump.

Karl Rove, a former strategist to President George W. Bush who now informally advises the Trump campaign, noted that in his winning 2018 campaign, Gov. Ron DeSantis of Florida won by fewer than 40,000 votes after carrying 35 percent of the Jewish vote.

On Wednesday, a day after the accords were signed, the Trump campaign announced a “Jewish Voices for Trump” coalition led in part by the billionaire casino mogul Sheldon G. Adelson, aimed at galvanizing Jewish voters. (A web page for the effort urges visitors to text the word “shalom” to a number that will add them to the campaign’s database.)

The Jewish Electorate Institute poll did show a slight improvement for Mr. Trump from a 2016 exit poll commissioned by the liberal pro-Israel group J Street, which found that he carried 25 percent of the Jewish vote. But he still faces serious headwinds to winning over American Jews.

But on Friday, Abraham H. Foxman, who served as the national director of the Anti-Defamation League for 28 years, published an opinion essay in The Times of Israel urging Jewish voters to oppose Mr. Trump.

“Trump’s failings of character and America’s dismal global standing have hurt Jewish interests,” Mr. Foxman wrote. He added that “Trump’s presidency — in spirit and in deed — has given succor to bigots, supremacists and those seeking to divide our society.”

Halie Soifer, the executive director of the Jewish Democratic Council of America, said the Jewish Electorate Institute poll, conducted by the Democratic polling firm Garin-Hart-Yang Research Group among 810 Jewish voters, showed that they had made up their minds about Mr. Trump. “It’s not working for Jewish voters,” Ms. Soifer said.

Daniel Shapiro, who served as President Barack Obama’s ambassador to Israel, said that had been true from the start of Mr. Trump’s presidency. “He’s been trying every day for four years to turn Israel into a wedge issue with American Jewish voters, and he can’t even move it out of the margin of error,” Mr. Shapiro said. “The votes are set.”

But Ms. Soifer said that on Israel policy, Mr. Trump was at least as interested in a different group of voters. That was clear at a campaign rally last month, when the president referred to his 2017 decision to officially recognize Jerusalem as Israel’s capital.

“We moved the capital of Israel to Jerusalem,” he said. “That’s for the evangelicals.”

“You know, it’s amazing with that — the evangelicals are more excited by that than Jewish people,” he added.

Mr. Rove said that Mr. Trump could have room to grow with evangelicals. While most support Mr. Trump, some may need a last-minute push to actually vote for a president whom few consider to be a model Christian.

“Evangelicals do care about character, so there is this tension,” Mr. Rove said. “So when he gets conservative judges and stands with Israel and forges new friendships in the region, that helps.”

Mike Evans, a Texas-based evangelical adviser to Mr. Trump, said he believed the president’s role in the accords would “have a huge effect” on evangelicals. “He’s done more than any president in American history for the State of Israel,” said Mr. Evans, who added that only abortion was as important an issue to evangelical voters.

But he warned that Mr. Trump and his surrogates had more work to do. Evangelicals are strongly opposed to any agreements in which Israel might trade or renounce its right to what they see as its biblical land, and Mr. Evans said some believed that was what happened on Tuesday.

“The base did not get a definitive understanding of the Abraham Accords,” Mr. Evans said, adding that many of his Jerusalem Prayer Team’s 73 million Facebook followers have asked: “Is this land for peace? And if it is, it hurts” the Trump administration.

“We’re trying to clarify that and let them know that this is not a land-for-peace deal. Israel has not given up land to get this agreement,” Mr. Evans said. “So basically, I’m having to put out that fire right now and to explain to them that the Abraham Accords isn’t a document that’s going to bring a curse upon our nation.”