The Robert Koch Institute reported that there were no new deaths recorded keeping the total to 9,386.

Clinicians in Singapore have developed a robotic equipment that can carry out safe and gentle nasal swab tests, according to a report by the Straits Times.

The new equipment, known as SwabBot, allows the patients to control the test themselves, making it more comfortable and safe, the report said.

The process can take 20 seconds and is equipped with a mechanism that authomatically withdraws the swab stick if there is resistance. It was developed by clinicians from two government hospitals and the company Biobot Surgical.

Australia’s second largest state of Victoria is one course to ease more restrictions as the number of cases continues to drop.

The state capital of Melbourne reported 35 new cases on Monday – below the target of 50 cases or less by September 28, when many of the restrictions are expected to be lifted.

China’s National Health Commission has reported 12 new coronavirus cases, raising the number of cases in the country to 85,291, although most of the infections have now recovered.

The agency said all the new cases are imported. At least 25 others were categorised as asymptomatic.

No new deaths were reported keeping the death toll at 4,634.

New Zealand Prime Minister Jacinda Ardern has announced that the coronavirus restrictions in the city of Auckland will be eased starting on Thursday, while lockdown limits will be lifted altogether in other parts of the country.

Ardern said that starting from midnight on Monday, the rest of the country will now be free of movement restrictions although health safety protocols will still be in place. 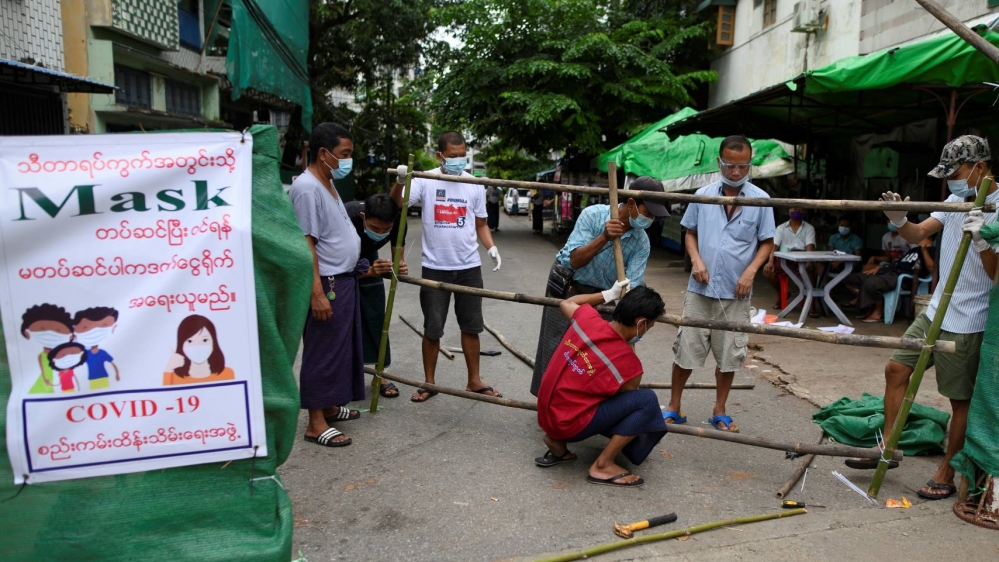 Under the new lockdown, which was ordered on Sunday, classes are suspended and employees are required to work from home [Shwe Paw Mya Tin/Reuters]

A stay-at-home order for Myanmar’s commercial capital, Yangon, has taken effect as the country tries to contain the spred of the coronavirus.

Under the new lockdown, which was ordered on Sunday, classes are suspended and employees are required to work from home.

South Korea has reported 70 new coronavirus cases, the second consecutive day that it reported infections below 100, but the government also admitted that “high number” of untraceable cases remain.

The Korea Disease Control and Prevention Agency (KDCA), of the new cases at least 55 were local infections. The total number of cases has now reached 23,045.

The latest numbers come as in-person classes resumed in the capital Seoul and surrounding areas on Monday, according to Yonhap news agency.

The number of infections officially reported in the country now stands at 697,663, while the death toll has hit at least 73,493 although the government reported recently that excess deaths hit over 120,000.

Brazil’s health ministry has reported 16,389 additional confirmed cases of the coronavirus, bringing the total number of infections to more than 4.52 million, though the latest numbers do not include three states.

At least 363 new deaths were also reported. Nearly 137,000 people have died from COVID-19 in Brazil, second only to the United States.

United Kingdom Health Minister Matt Hancock has warned that the country is at a “tipping point” regarding the coronavirus.

In an interview with the BBC, Hancock said that the choice was “either that everybody follows the rules … or we will have to take more measures” such as a possible second national lockdown.

The government has reported almost 3,900 new cases on Sunday, prompting a call by London Mayor Sadiq Khan for quick action with the situation in the capital “clearly worsening”.

Read all the key developments from yesterday (September 20) here.