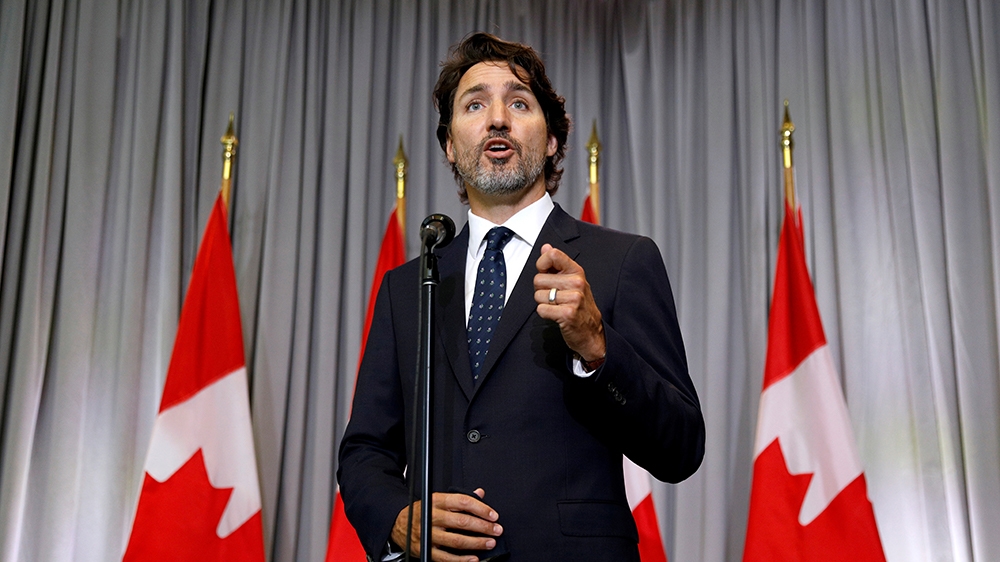 The Canadian Labour Congress, the largest labour organisation in Canada and some of Canada’s largest unions have added their signatures to an open letter (PDF) addressed to the prime minister to raise concern about the “serious ethical, legal, human rights and humanitarian implications of Canada’s ongoing exports to Saudi Arabia”.

Open letters by the coalition of civil society organisations were previously sent to Trudeau in March and August 2019 and in April 2020, but no response has been received to date, the letter noted.

Academics and activists have long pressured Ottawa to cancel the exports of Canadian-made LAVs (light armoured vehicles) to Saudi Arabia, citing Saudi Arabia’s involvement in the Yemen war and the killing of Saudi journalist Jamal Khashoggi.

Campaigners have cited mounting credible evidence that Canadian arms are being used by the Saudi-UAE led coalition in the long-running conflict in Yemen.

The 14 billion Canadian dollar ($10bn) deal to export LAVs made by the Ontario-based General Dynamics Land Systems to Saudi Arabia was brokered in 2014 by the previous Conservative government and then given final approval by Trudeau’s Liberal Party government following the 2015 election.

But in April, Canada decided to lift the suspension as “significant improvements” have been made to the controversial multibillion-dollar contract that would secure jobs for thousands of Canadians, according to government ministers.

The letter to Trudeau published on Thursday comes as Canada marks one year since it acceded to the United Nations Arms Trade Treaty (ATT), an international agreement that requires state parties to assess whether their arms exports could violate international law.

Under the ATT, arms exports are prohibited wherever there is a “substantial risk” that they could undermine peace and security.

Yet in the same year that Canada acceded to the ATT, its arms exports to Saudi Arabia more than doubled, increasing from almost $1.3bn in 2018 to almost $2.9bn in 2019, according to the civil society coalition.

“Stunningly, arms exports to Saudi Arabia now account for over 75 percent of Canada’s non-US military exports,” the letter said. In comparison, Canada’s pledged humanitarian aid for Yemen is at $40m.

Earlier this month, the UN Group of Eminent International and Regional Experts on Yemen named Canada – for the first time – as one of the countries “perpetuating the conflict” in Yemen with its arms sales to Saudi Arabia.

Cesar Jaramillo, executive director of Canadian peace research institute Project Ploughshares, told Al Jazeera that the discussion around Canadian arms exports to Saudi Arabia is “no longer one of possible risk, but of gross negligence, if not complicity”.

“What can be inferred about the purported strength of Canada’s export controls if Saudi Arabia is deemed an eligible recipient? Who would Canada not export to? Because Saudi Arabia sets the bar exceptionally low,” Jaramillo said.

“Canada joined the ATT with promises of increased rigour and transparency around arms exports, but its determination to continue arming Saudi Arabia is turning those promises to empty rhetoric.”

The coalition of 39 civil society organisations have also demanded that the Trudeau government work with trade unions representing workers in the arms industry to develop a plan that secures the livelihoods of those who would be impacted by the cancellation of arms exports.

Simon Black, professor at Brock University and lead organiser with Labour Against the Arms Trade, told Al Jazeera that Ottawa has argued that scrapping the deal would lead to significant job loss, but this does not need to be the case.

“The conversion of arms manufacturing to socially useful production provides possibilities for innovative solutions to the climate crisis,” Black said.

In April 2020, the government announced plans to create an advisory panel of experts and to spearhead an international effort on establishing an inspections regime.

But no further information has been provided and civil society organisations have remained outside of the process, according to the coalition.