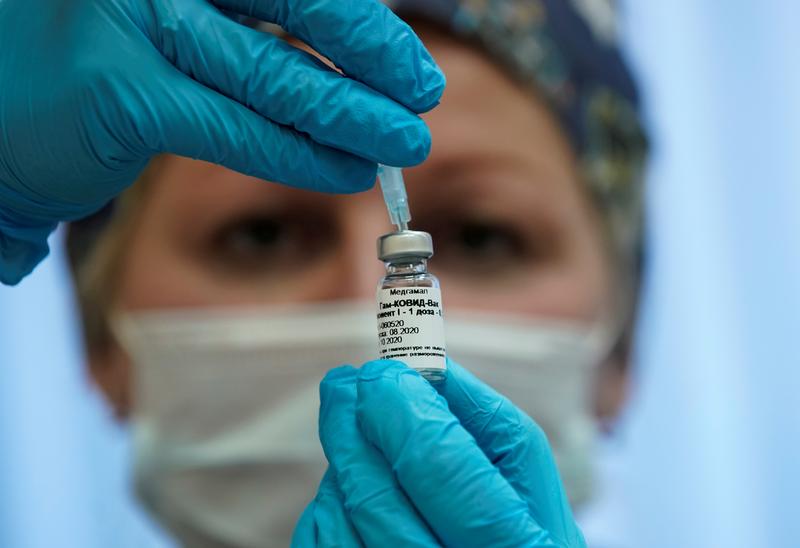 MOSCOW/BRASILIA (Reuters) – Russia is so confident in its COVID-19 vaccine that it will shoulder some of the legal liability should anything go wrong, rather than requiring buyers to take on the full risk, the head of the state fund bankrolling the project told Reuters.

The decision leaves the vaccine’s state-backed developers open to potentially costly compensation claims should there be any unexpected side-effects. It is something many vaccine-makers have sought to avoid, by asking for full indemnity – complete protection from liability claims – from nations they sell to.

The approach is different from many places in the world. In the United States, for example, liability for COVID-19 vaccines has been shifted fully to the U.S. government. This shields the developers because widespread inoculation against the disease is considered a benefit to society.

With the global vaccine race hotting up, and dozens of candidates being tested on humans, backers of Russia’s ‘Sputnik-V’ shot see liability as a key battleground as they aim to capture market share.

“Russia is so confident in its vaccine that it has not asked for full indemnity and this is a major differentiating factor versus any Western vaccine,” said Kirill Dmitriev, head of the Russian Direct Investment Fund (RDIF), the state sovereign wealth fund that is backing the vaccine.

“All of them are asking for full indemnity of legal risks.”

Dmitriev did not say whether buyers of the Russian vaccine would be asked to take on partial liability, and did not give details about indemnity clauses. His representatives said he had nothing more to add.

However, the health secretary of the Brazilian state of Bahia, which plans to buy 50 million doses of Russia’s vaccine, told Reuters the legal risks would be carried by Russian entities.

Vaccine developers around the world are compressing years of development into months, raising the possibility of unexpected consequences and making the issue of compensation claims a key point in supply deal negotiations.

For example, British drugmaker AstraZeneca AZN.L, which has developed a vaccine with Oxford University, has been granted full protection from any future liability claims by many countries with which it has signed supply deals, a senior executive told Reuters in July.

Dmitriev’s comments came after some scientists expressed concerns about the safety and efficacy of Sputnik-V, which the Russian government approved for use before completing large-scale human trials.

Sputnik-V was developed by Moscow’s Gamaleya Institute, a state research body. The RDIF, which is marketing the vaccine abroad, will shoulder some of the legal risks in supply contracts along with pharmaceutical firms in the fund’s portfolio which are producing the shot.

“We are confident in the long-term consequences,” Dmitriev said. “We are putting our money where our mouth is by not asking for full indemnity in partnerships we create in different countries.”

Thus far, RDIF has announced deals to supply just over 200 million doses, half to Latin America and half to India. The fund says it has orders for as much as 1 billion doses.

Fábio Vilas-Boas, health secretary of Brazil’s Bahia state, which is placing the 50-million-dose order, told Reuters the legal risks would be carried by the Russian pharmaceutical firms producing and supplying the vaccine.

“In the case of any adverse event, nothing will stop people who feel they have been harmed from filing a class action against any of the pharmaceutical companies,” said Fábio Vilas-Boas, who negotiated the testing and letter of intent with RDIF.

Neither Bahia nor Paraná, a Brazilian state which plans to conduct trials of Sputnik-V on 10,000 volunteers, have actually signed contracts for supply of the vaccine, according to Bahia’s Vilas-Boas and the Paraná state governor’s chief of staff, Guto Silva, who also negotiated with the Russian side.

Thus far, deals have been formalised only in memorandums of understanding, as contracts are awaiting the vaccine’s approval by Brazil’s health regulators.

Russia has staked its scientific reputation on the results after approving the vaccine for domestic use before mass testing had even begun, becoming the first country to licence a COVID-19 vaccine.

Late-stage trials, known as Phase III, are currently ongoing in Russia, with at least 40,000 volunteers taking part. Initial results are expected in October or November.

Volunteers in its Phase III trial are unpaid, but their insurance is covered, including a payout of 2 million roubles ($26,430) in case of death, one volunteer told Reuters.

RDIF also expects to run trials of the vaccine abroad, with plans already in place with Indian pharmaceutical firm Dr Reddy’s and with Brazil’s Paraná state, both pending regulatory approval.

Many people involved in the Sputnik-V’s development, including Dmitriev, have tried the jab on themselves in a bid to convince the world of the safety of a Russian-made vaccine.

Dmitriev said he was not concerned about the risk of compensation claims against RDIF.

“We know it will not happen. Because the vaccine has been studied for decades,” he said.

“We know we will not have … billions and billions of liabilities because we have a proven platform and they don’t,” he said. “Simple.”