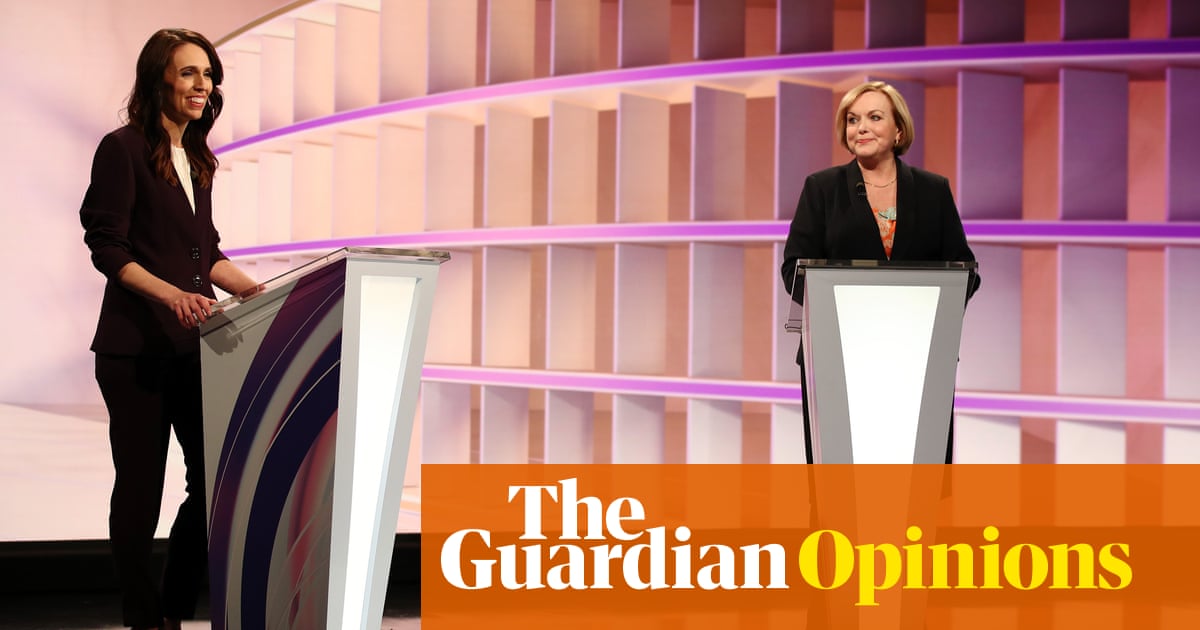 There was high drama at the first televised debate last night between New Zealand’s prime minister, Jacinda Ardern, and the leader of the oppositionNational party, Judith Collins, when host John Campbell crept out of the darkness and onto the studio floor in the spooky opening seconds. His eyes were bulging. He clutched some kind of weapon in his hands. Campbell has always had an excitable, untamed spirit, and his menacing entrance made him look like Michael Myers from Halloween except in a grey check suit.

And that was it for the high drama. After the curious stage direction, Campbell gave a warm welcome to Ardern and Collins, and revealed that he was holding nothing more sinister than a brand new clipboard. The next 90 minutes were all downhill.

The opening leaders debate in the 2020 general election was somewhat lacking in spark. Of zingers, there were few; of fizz, there was little. It did not exactly cut and nor could it be said that it was generous in thrust. Only one of the leaders came to play. Collins was animated, hooting and scoffing hither and yon, but Ardern was tranquil as a lake, and just as flat.

Collins’s opening words were: “I never give up.” And she never wanted to shut up, either, as she gave a confident and spirited performance, and positioned herself as someone who understood the thwarted hopes of New Zealanders driven to the wall by the economic crisis caused by Covid-19, lockdowns, and border restrictions. Four hundred jobs were being lost every day. “I tell you what, John,” she kept saying, and one of the things she told him over and over is that she had experience as a small business owner. “I once was one.”

She treated the debate as a kind of autobiography in instalments. “My husband is Samoan.” And: “I’m the daughter of a Matamata dairy farmer.” Also: “The windows didn’t shut.” The latter was a reference to her childhood home.

Ardern divulged nothing about her personal life or background. She wasn’t interested in being interesting. The results of an opinion poll were released immediately prior to the debate and showed Labour comfortably in front; she was intent on showing the party was a safe pair of hands. She recited her government’s record these past three years, made earnest statements about the need to address climate change, and pledged her support for a living wage. There was vague talk of respecting people who “prefer to rent” than buy a house. Throughout, her manner swung from poised to supremely indifferent. It wasn’t a very big swing.

The debate was staged in Auckland. The city is under lockdown alert level 2.5, which prohibits public gatherings of over 10 people; as such, the mandatory absence of a live audience gave it a stiff atmosphere. Even so, it didn’t hold Collins back. Ardern made a choice to present as a serious and capable leader with dead eyes. It fell to Campbell to try and whip a bit of excitement into proceedings. His floggings were in vain; he clutched the clipboard ever tighter to his chest, and sighed: “I need a gin.”

Ardern and Collins gave stand-ups for the press after the debate was finished. “Politics isn’t a blood sport,” said Ardern, and not much else, cutting things short after a few minutes. She ducked into a side room as Collins and her beaming entourage were led out to meet the press. “I tell you what,” she began, and proceeded to tell them she won the debate, and couldn’t wait for the next one, and the one after that, before voters head to the polls on 17 October.

The door to a side room opened when Collins took her place in front of the cameras. All eyes were on the National party leader as she happily claimed victory. No one noticed Ardern creep out of the room with her unsmiling entourage. Quickly and quietly, they got the hell out of Dodge.

Sorgente articolo:
First TV debate between Ardern and Collins avoids being a horror show – The Guardian