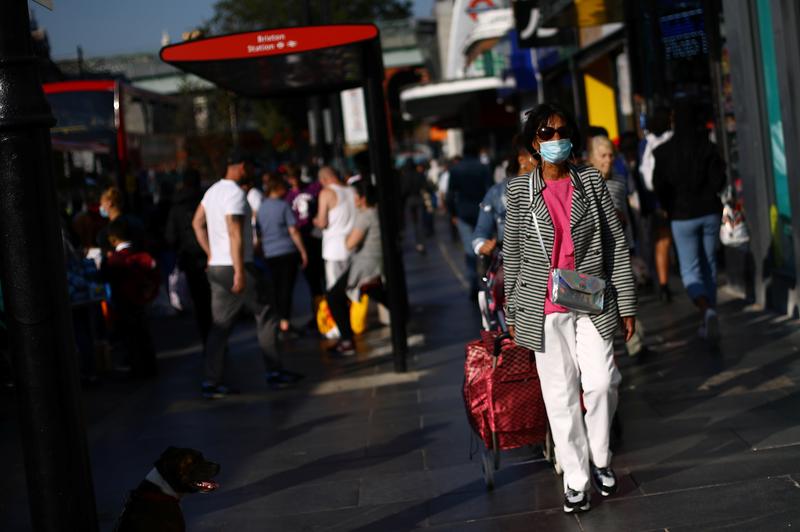 LONDON (Reuters) – British Prime Minister Boris Johnson will tell people on Tuesday to work from home where possible and will curb timings for bars and restaurants to tackle a fast-spreading second coronavirus wave, but the opposition accused him of losing control.

With millions across the United Kingdom already under some form of COVID-19 restriction, Johnson will tighten measures in England while stopping short of another full lockdown like he imposed in March, according to his office and ministers.

Johnson will hold emergency meetings with ministers, address parliament at 1130 GMT and then speak to the nation at 1900 GMT after government scientists warned that the death rate would soar without urgent action.

Just weeks after urging people to start returning to workplaces, Johnson will now advise them to stay at home if they can, according to his office and ministers. He will also order all pubs, bars, restaurants and other hospitality sites across England to start closing at 10 p.m. from Thursday.

“There is going to be a shift in emphasis. If it is possible for people to work from home, we are going to encourage them to do so,” Michael Gove, the minister for the cabinet office, told Sky News.

The new curbs will restrict the hospitality sector to table service only, though Gove said he wanted those who could not work from home – for example in manufacturing, construction and retail – to continue to work from COVID-secure workplaces.

It was unclear if the measures would be enough to tackle Britain’s second wave, which government scientists warned could reach 50,000 new cases per day by mid-October.

Opposition Labour leader Keir Starmer lambasted Johnson’s leadership, especially over failings in testing. “Instead of getting a grip, the government has lost control … Our testing system collapsed just when we needed it most,” he said.

The United Kingdom already has the biggest official COVID-19 death toll in Europe – and the fifth largest in the world – while it is borrowing record amounts to pump emergency money through the damaged economy.

Bank of England Governor Andrew Bailey warned that the “very unfortunate” escalation of COVID-19 cases threatened the economic outlook and said the central bank was looking hard at how it could support the economy further.

Pub operator JD Wetherspoon said it could cut 400-450 jobs at sites at six airports, including London’s Heathrow and Gatwick, because of the large drop in passengers.