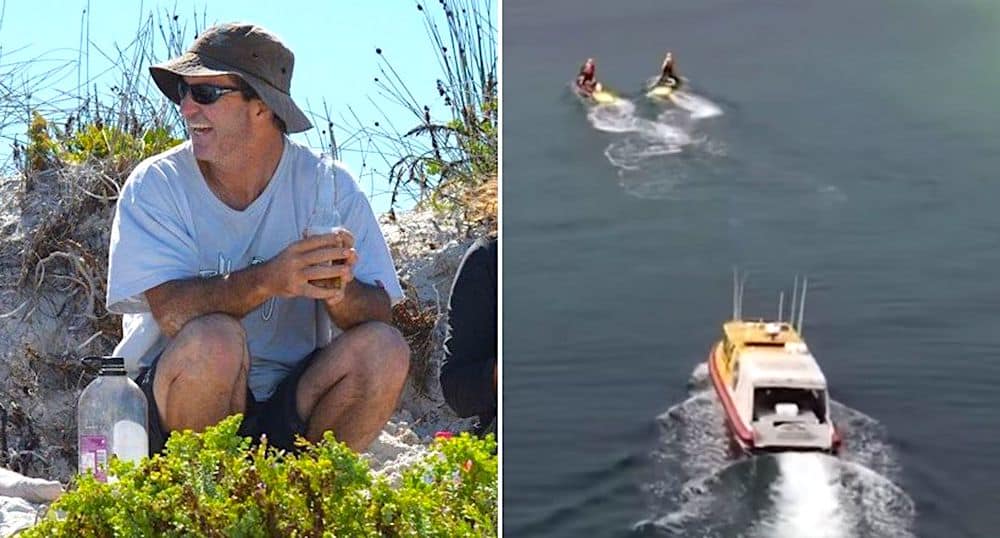 For Jan Golebiowski the surfer who tried to save his buddy Andrew Sharpe from a “monster” Great White at Kelpies, in Esperance, on Friday morning, it was a dreadful feeling of déjà vu.

In 2006, his kid brother Zac, fifteen at the time, was surfing a knee-deep sandbank at Wharton Beach, a sheltered joint between Cape Le Grand and Cape Arid National Parks, when he was hit by a ten-foot White, the animal taking his entire right leg.

“It came from the side and it felt like what’d you’d imagine a big king hit to be like,” Zac told The Guardian. “A very big strike. It was a full-on horizontal attack in water that was only just head height. When I take my friends to where the attack happened they are always amazed that a shark attack could have happened there. The shark bit [off] my leg and the force of the bite took me down, pulled me under. There was no fighting for air. It was too shallow for that. It took me under and let go. I came straight back up and called for help. The [2.5-metre to three-metre) shark was probably a juvenile, curious, experimenting maybe. If it had been bigger it would have bitten me in half. A big shark in full hunting mode, it would have been carnage. [My brother] said it circled a couple of times. It could have attacked two more people but didn’t. Any higher up my leg and it would have got [major] arteries.”

Ten years later, Zac, who sank into a years-long depression, became a bodyboarder and moved to South Australia, returned to Esperance for a camping vacay to mark a decade since the attack. He was swinging back to town after surfing Whartons and passed the turn-off to Kelpies at the same time a Great White was attacking, and killing, teenage surfer Laticia Brouwers.

“It felt like returning to the scene of a crime,” said Zac.

On Friday, big bro Jan was among a group of fifteen-to-twenty surfers enjoying what another local Ross Tamlin describes as “perfection conditions” when the shark hit.

“Obviously everything panics at the time when they realise what’s happening. The guy who was closest to him, Jany, tried to render help but I think it was all too much for him and he paddled in. Jan’s a very brave man, he’s a hero,” Tamlin told The Sunday Times. “And he was great mates with Sharpey, so for him to obviously try and render assistance – brave, brave soul…your initial thoughts are obviously with the surfer and you want to render assistance as much as possible. That’s what we all wanted to try and do, whether you can actually achieve that and do anything is another story.”

Tamlin said the dorsal fin and tail fin of the White were so big his initial thought was there were two sharks.

“I’ve never seen a dorsal fin that big before, not even in media footage,” he said.

The Western Australia premier Mark McGowan has ruled out drum lines (“We’re not putting in drum lines because there are people in the water”) and, instead, said his government will increase its Great White tagging program.

Sorgente articolo:
Man who tried to save Esperance surfer Andrew Sharpe killed by fifteen-foot Great White is brother of longboarder who lost leg to Great White in 2006 – BeachGrit