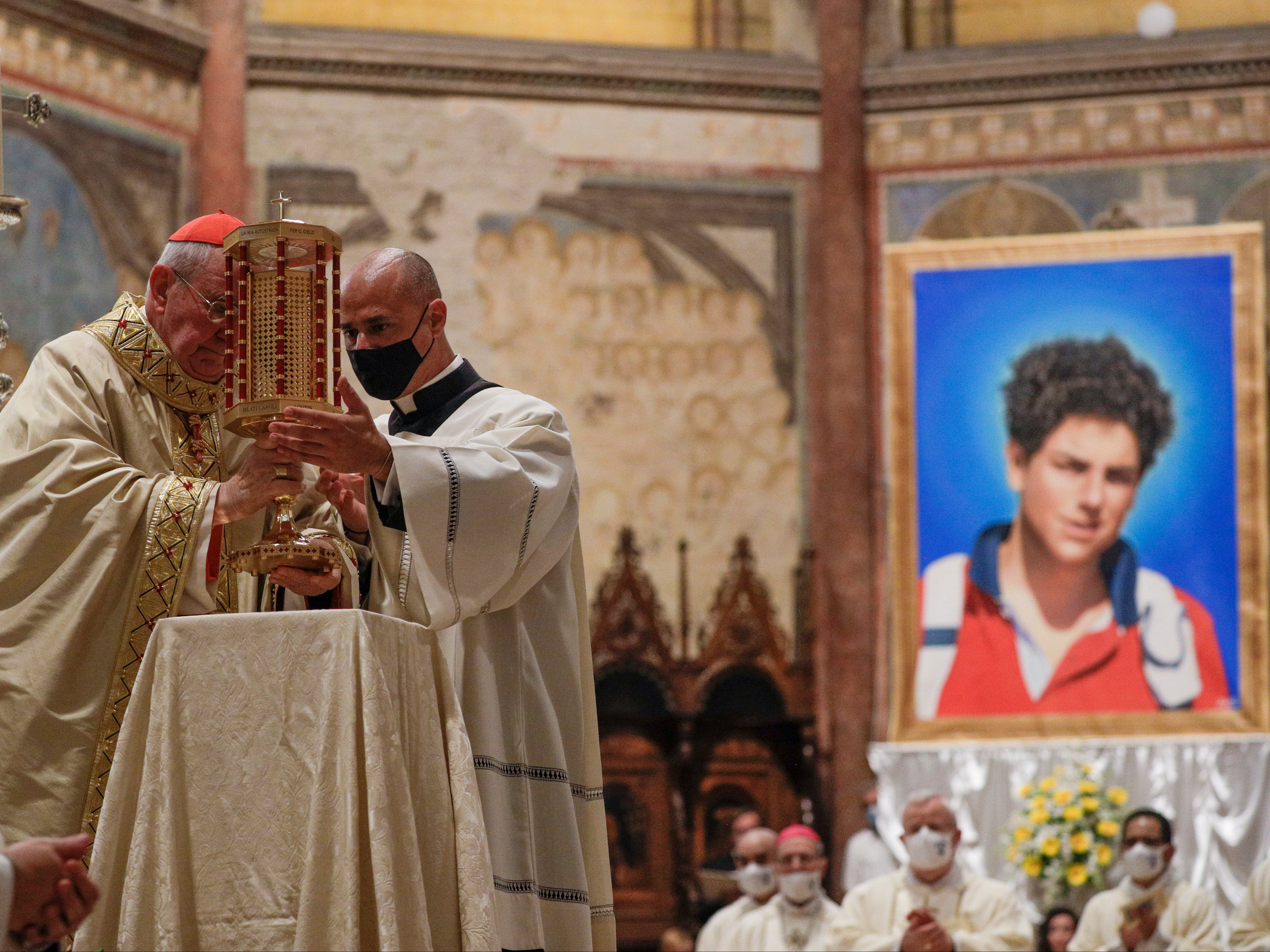 A London-born 15-year-old has moved one step closer to becoming the first millennial saint.

In a service on Saturday in the Italian town Assisi, where he died with leukaemia in 2006, Carlo Acutis became the youngest contemporary person to be beatified.

This honour means the Catholic Church recognises his ability to intervene on behalf of those who pray in his name, and sets him another step further on the path to sainthood.

Already touted as “the patron saint of the internet”, Acutis taught himself to code from a textbook as a young boy, running websites for Catholic organisations and creating an online catalogue of purported miracles.

And earlier this year, Pope Francis approved a miracle attributed to Acutis himself, supposedly carried out some seven years after his death.

The Church claims Acutis intervened from heaven in 2013 to save the life of a seven-year-old boy in Brazil, whose rare pancreatic disorder was purportedly healed after coming into contact with a piece of one of Actutis’s old T-shirts.

During the beatification ceremony in Assisi’s St Francis Basilica, a portrait of Acutis was slowly unveiled, revealing a smiling teen in a red polo shirt, his curly dark hair illuminated by a halo of light.

His body, clad in a tracksuit and trainers, has been on display for veneration in a sanctuary in the town, and his heart will be displayed in the basilica.

Cardinal Agostino Vallini kissed each of the boy’s mask-wearing parents, Andrea Acutis and Antonia Salzano, after reading a proclamation decreed by Pope Francis.

“Carlo used the internet in service of the Gospel, to reach as many people as possible,” the cardinal said, adding that the teen saw the web “as a place to use with responsibility, without becoming enslaved”.

Born on 3 May 1991, Acutis moved to Milan as a three-year-old. Much to the surprise of his non-practicing parents, he soon showed an intense religious devotion and asked to be taken to visit the city’s churches, his mother told the Corriere della Sera newspaper.

By the age of seven, he asked to receive the sacrament of Holy Communion, and was granted an exception to the customary age requirement.

“There was in him a natural predisposition for the sacred,” said his mother, who took up theological studies in order to better answer her son’s questions, reigniting her own faith. “It is a path that continues. I hope to at least wind up in purgatory,” Ms Acutis said.

His beatification puts him on a similar path to two Portuguese shepherd children, who had lived in the early 1900s and were proclaimed Catholic saints in 2017.

While sainthood typically requires the approval of at least two miracles, Pope Francis has been known to waive this requirement.

However, his mother believes he has already performed the requisite amount.

“I was sure he was already a saint while alive. He healed a woman from cancer, praying to the Madonna of Pompeii,” Ms Acutis told Corriere.

“Before he left us, I told him: ‘If in heaven you find our four-legged friends, look for Billy’, my childhood dog that he never knew,” the mother added.

One day she reportedly received a call from an aunt who was unaware of their pact, who Ms Acutis said had told her: “I saw Carlo in a dream tonight. He was holding Billy in his arms.”