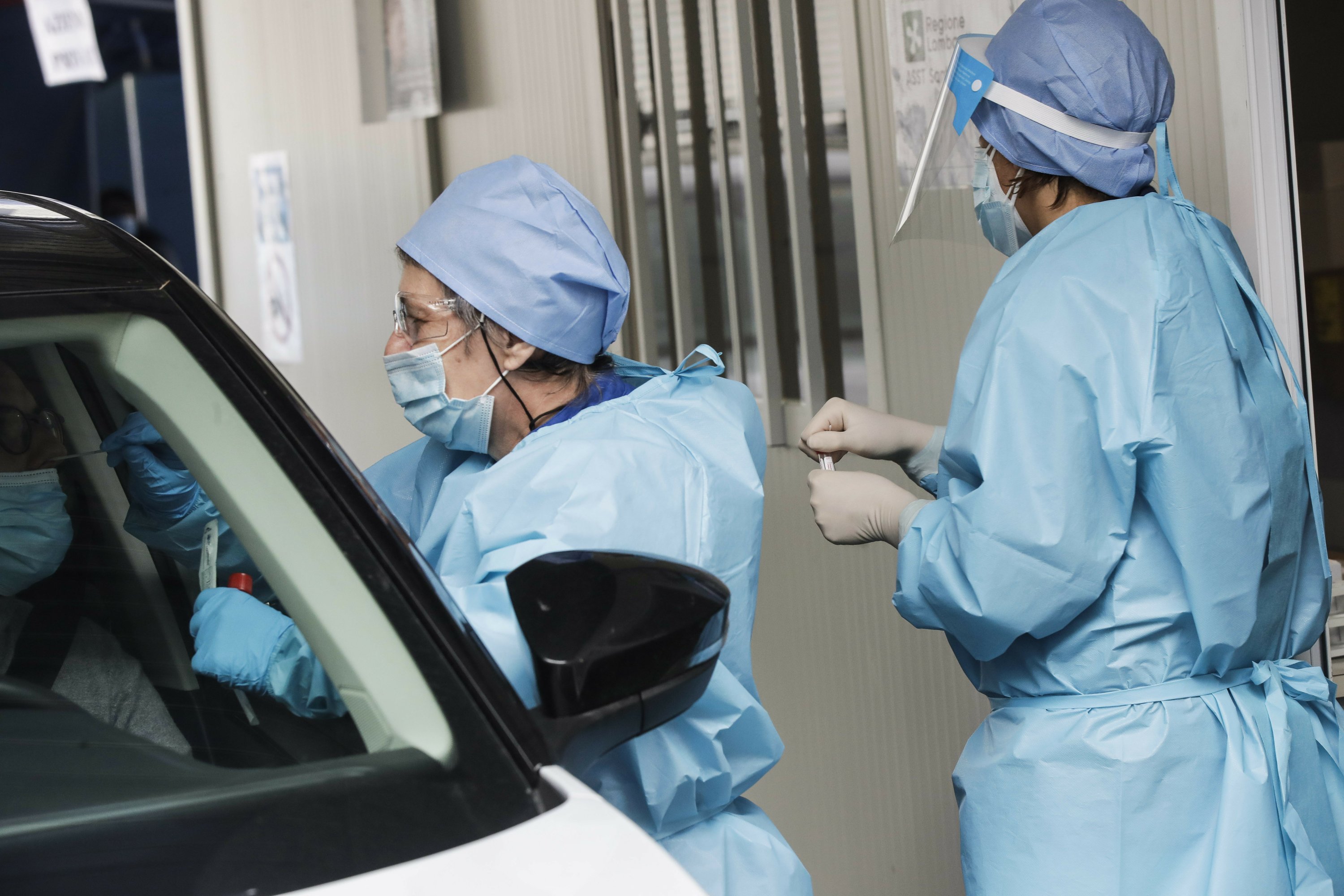 MILAN (AP) — Coronavirus infections are surging again in the region of northern Italy where the pandemic first took hold in Europe, renewing pressure on hospitals and health care workers.

At Milan’s San Paolo Hospital, a ward dedicated to COVID-19 patients and outfitted with breathing machines reopened over the weekend, a sign that the city and the surrounding Lombardy region is entering another emergency phase of the pandemic.

The region was the hardest hit area of Italy in the spring, when Italy spent weeks with the world’s highest reported virus-related death toll before being overtaken by the United States. For the medical personnel in Lombardy who fought the virus the first time around, the long-predicted rebound came too soon.

“On a psychological level, I have to say I still have not recovered,” said nurse Cristina Settembrese, referring to the period in March and April when the region accounted for one-third of Italy’s confirmed cornavirus cases and nearly half of Italy’s COVID-19 deaths.

“In the last five days, I am seeing many people who are hospitalized who need breathing support,” Settembrese said. “I am reliving the nightmare, with the difference that the virus is less lethal.”

Months after Italy eased one of the globe’s strictest lockdowns, the country on Wednesday posted its highest daily number of new cases with 7,332 — surpassing the previous high of 6,557 that was recorded during the virus’s most deadly phase in March.

Lombardy is again leading the nation in case numbers, an echo of the traumatic spring months when ambulance sirens pierced the silence of stilled cities.

The Italian government is eager to avoid another nationwide lockdown to protect the country’s economy but has not ruled out closing cities or provinces.

Increased testing is partially responsible for the latest round of high case numbers, and many of the individuals who have tested positive are asymptomatic. So far, Italy’s daily COVID-19 mortality figures remain significantly below the spring heights, hovering around 40 in recent days. That compares with the high of 969 dead reported on one day in late March.

In response to the current outbreak, Premier Giuseppe Conte’s government tightened nationwide restrictions twice inside a week. Starting Thursday, Italians are prohibited from playing casual pickup sports, bars and restaurants face a midnight curfew, and private celebrations in public venues are banned. Masks are mandatory outdoors as of last week.

But there is also growing concern among doctors that Italy squandered the gains it made during its 10-week lockdown and didn’t move quickly enough to reimpose restrictions. Concerns persist that the rising stress on hospitals will force scheduled surgeries and screenings to be postponed — creating a parallel health emergency, as happened in the spring.

Italy is not the only European country seeing a resurgence in confirmed virus cases. French President Emmanuel Macron announced Wednesday that 18 million people living in nine regions of France, including in Paris, will have a curfew starting Saturday through Dec. 1 in an effort to curb new infections.

Macron also reinstated a nationwide state of health emergency that had ended three months ago. France has a total of 798,000 confirmed cases and nearly 33,000 deaths, while COVID-19 patients occupy a third of intensive care unit beds nationwide.

“We won’t go to restaurants after 9 p.m., we won’t see friends, we won’t party, because that’s how to pass on the virus,” Macron said during a during a televised interview.

Italy so far is faring better than its neighbors this time around. Italy’s cases per 100,000 residents have doubled in the last two weeks to nearly 87 — a rate well below countries like Belgium, the Netherlands, France, Spain and Britain that are seeing between around 300 to around 500 per 100,000. Those countries have also started to impose new restrictions.

This time, Milan is bearing the brunt, accounting for half of Lombardy’s daily cases, which spiked past 1,800 on Wednesday. Bergamo — which was hardest hit last time and has been seared into collective memory by images of army trucks transporting the dead to crematoria — had just 46.

The resurgence as the weather cools has so far been most strongly linked to vacations, both at home and abroad, as Italians flocked to beaches and crowded islands during a remarkably relaxed summer.

“The lockdown is a treasure that we scraped together with great effort and great sacrifice. We risk losing the results from a summer that in some ways was rather reckless,” Massimo Galli, the director of the infection disease ward at Milan’s Sacco Hospital, told The Associated Press. “The whole country acted as if the infections never existed, and was no longer among us.’’

His hospital is on the front lines of the pandemic, but he declined to say how many beds were occupied with coronavirus patients.

Dr. Anna Carla Pozzi, a family physician in a Milan suburb, said she feared that fatigue is weakening the public’s response to the virus’s resurgence. That’s creating a situation similar to the one in January and February, when the virus was circulating undetected in Italy, and nothing was being done, she said.

Pozzi sees her own patients acting surprisingly casually: Some disregard instructions to only come to her office with an appointment. A high school student called the doctor Tuesday seeking a medical certificate to go back to school, saying she had spent a week at home recovering from flu-like symptoms.

“Great that you’re feeling better,” Pozzi told the student, adding that the girl still needed to get tested for the virus before she could return to class.

The doctor was pleasantly surprised to find she could book the patient in for testing the next day — something unheard of during the winter and spring.

Testing is helping Italy stay on top of the curve. On Wednesday, at least 100 cars were lined up for on-demand drive-thru testing at the San Paolo hospital where Settembrese works.

Dr. Guido Marinoni, the head of the association of general practitioners in Bergamo, where 6,000 people died in one month, said people in the province were sufficiently frightened by what happened in the spring to continue to follow the rules. But that may not be so in other parts of Lombardy or the country.

“Six thousand in one month. Do you know how many dead there were in five years that Milan was bombed during World War II, and it was targeted a lot: 2,000,” Dr. Marinoni said. “What is worrying to see in other areas is the nightlife, people who are gathering in bars and partying. This is very dangerous.”

This story has been updated to correct that the average daily death toll nationwide is hovering around 40, not 50, and that the San Paolo hospital had cars lined up for drive-through testing on Wednesday, not Thursday.