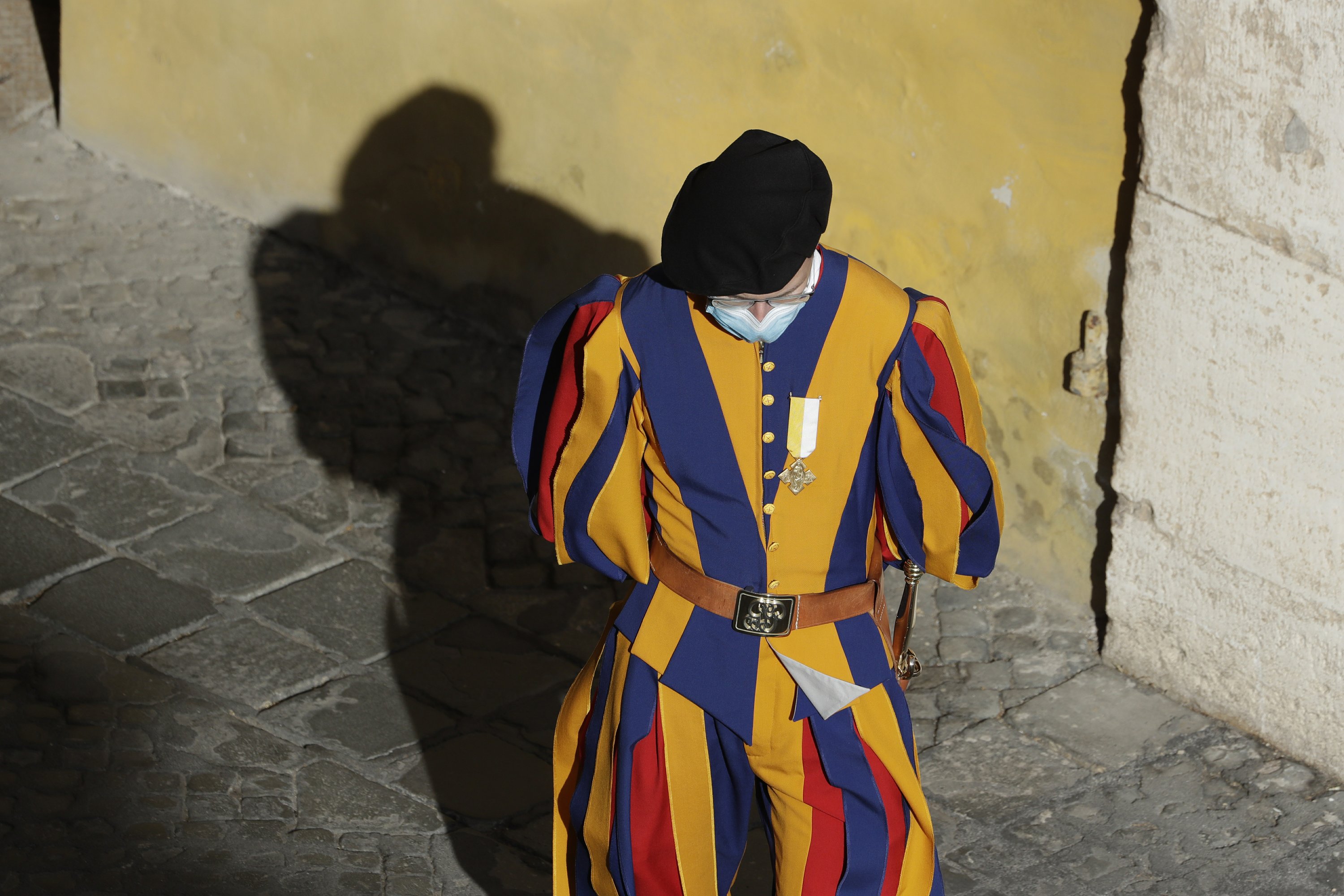 The Swiss Guards say there’s more testing within the 135-member corps, with a reshuffling of schedules to “avoid all risks of contagion.”

The 83-year-old pope, who had part of a lung removed in his 20s due to illness, would be at high risk for COVID-19 complications. He’s been reluctant to wear a face mask and appeared without one Wednesday, even though many of his entourage and all the Swiss Guards wore a mask.

Masks are required in Italy, both indoors and outdoors. While Francis was seen donning a mask a few weeks ago, the Vatican hasn’t responded to questions about why he isn’t wearing one.

Francis often seems out of breath and speaks in a whisper, suggesting that wearing a mask might be particularly uncomfortable.

— Most Americans highly critical of President Donald Trump’s handling of both the coronavirus pandemic and his own illness.

— Nominations for the Tony Awards will have just 18 eligible plays and musicals because of the coronavirus interrupting on the Broadway season.

The northern region of Lombardy, hardest hit in the first wave, led the country with more than 2,000 confirmed infections.

Neighboring Piemonte added 1,000 as well as southern Campania, whose governor has warned that he’d impose a lockdown if Campania hit the 1,000-a-day infection mark.

Italy added 83 deaths, bringing the confirmed death toll to 36,372, the second highest in Europe after Britain.

BERLIN — Germany added France and the Netherlands to its list of high-risk areas for the coronavirus.

The government’s Robert Koch Institute also included the Italian regions of Campania and Liguria, parts of Poland, and dozens of other regions across Europe on its newly updated list of risk areas.

LONDON — The British government has added Italy to its unsafe list of travel destinations following a resurgence in the coronavirus.

Anyone coming to the U.K. from Italy will have to quarantine for 14 days after arrival. The change starts Sunday and includes anyone arriving from Vatican City or San Marino.

The Greek island of Crete has been deemed safe, meaning arrivals from Greece, except the island of Mykonos, won’t need to quarantine.

Virus infections have risen across Europe, including the U.K., prompting many airlines to scale back their winter schedules.

Fauci told ABC’s “Good Morning America” on Thursday that given the rise in cases, “we’ve really got to double down on fundamental public health measures that we talk about every day because they can make a difference.”

As for Thanksgiving, when millions of Americans travel to gather with families and friends, Fauci says this November may need to be different. “We really have to be careful this time that each individual family evaluates the risk-benefit.”

The U.S. government’s top infectious disease expert says its especially important because people traveling over the holiday often pass through crowded transportation hubs such as airports.

“If you have vulnerable people, the elderly or people that have underlying conditions, you better consider whether you want to do that now or maybe just forestall it and wait,” Fauci says.

PARIS — France will deploy 12,000 police officers to enforce a curfew that starts Friday night and plans to spend another 1 billion euros helping businesses hit by the new restrictions.

French Prime Minister Jean Castex and other government ministers laid out new rules Thursday aimed at what he called a “sudden acceleration” of infections.

Interior Minister Gerald Darmanin says 12,000 police officers would be deployed between 9 p.m. and 6 a.m. to enforce the new curfew, imposed on some 20 million people in Paris and eight other French cities.

Amid protests by restaurant owners and others hit by this latest wave of virus restrictions, the government pledged to expand temporary unemployment payments and spend another 1 billion euros for hard-hit sectors.

France reported 22,591 new infections Wednesday and has a total of 33,037 confirmed deaths.

MEXICO CITY — Ricardo Salinas Pliego, one of Mexico’s wealthiest men and an adviser to President Andrés Manuel López Obrador, has tested positive for the coronavirus.

Salinas, the founder and president of Grupo Salinas, which includes TV Azteca and Banco Azteca among other companies, has been outspoken in his criticism of quarantine as a measure to slow the pandemic’s spread.

The 64-year-old Salinas announced his test result Wednesday night on Twitter. “Take care of yourself and don’t be afraid, like I always said,” he wrote. He’s at home but didn’t say if he had COVID-19 symptoms.

WASHINGTON — Dr. Anthony Fauci is criticizing a declaration by a group of scientists that supports the concept of “herd immunity,” which the White House is using to bolster a push to reopen schools and businesses.

Fauci says backing herd immunity — the idea that a disease will stop spreading once nearly everybody has contracted it — is “total nonsense.”

The top U.S. infectious disease expert says: “If you talk to anybody who has any experience in epidemiology and infectious diseases, they will tell you that that is risky and you’ll wind up with many more infections of vulnerable people, which will lead to hospitalizations and death,” he told ABC’s “Good Morning America” on Thursday. “So I think that we’ve just got to look that square in the eye and say it’s nonsense.”

BERLIN — The German Hospital Federation says the number of people hospitalized with COVID-19 in the country has doubled in the past week.

The head of the federation, Gerald Gass, says the first wave showed it takes about 14 days for the rise in infections to affect hospitals. He says the number of patients receiving intensive care is likely to pass 2,000 by November at current rates.

Germany’s well-funded health system has helped the country keep the death rate from COVID-19 significantly below other large European countries.

During the first wave of infections in spring, Germany took in dozens of patients from France, Italy and the Netherlands as their hospitals struggled to care for seriously ill patients.

Bavaria’s governor Markus Soeder says his state has received a request to treat patients from the neighboring Czech Republic, where case numbers have surged in recent days.

LONDON — Britain’s health secretary says London has moved to the second-highest coronavirus alert level amid a rise in cases.

Health Secretary Matt Hancock told the House of Commons the government acted because infection rates are rising rapidly in the capital and swift action was necessary to control the virus.

The move comes as millions of people in northern England are waiting to learn if they’ll be placed under the government’s tightest restrictions, like Liverpool.

LISBON, Portugal — Portugal is restricting social gatherings to a maximum of five people.

It’s also making masks mandatory outdoors and will impose fines on those disregarding measures against the record numbers of coronavirus infections.

Some of the new measures will last initially 15 days and come under a state of calamity that came into force in the early hours of Thursday, a day after it was adopted by the Portuguese Cabinet.

Prime Minister Antonio Costa has called the surge in coronavirus cases as “serious” but has rejected imposing a strict lockdown.

Attendance at weddings, baptism ceremonies and other family functions will be limited to 50 people. Businesses that break rules on opening times and on serving of alcohol will face fines up to 10,000 euros ($11,700), twice as much as the current amount.

LONDON — The surge of coronavirus cases across Europe has warranted the restrictive measures in numerous countries, making them “absolutely necessary,” the head of the World Health Organization’s Europe office says.

He called for countries to be “uncompromising” in attempts to control the virus, saying most of the COVID-19 spread is happening in homes, indoor spaces and communities not complying with protection measures.

“These measures are meant to keep us all ahead of the curve and to flatten its course,” said Kluge, while wearing a mask. “It is therefore up to us to accept them while they are still relatively easy to follow.”

Kluge cited epidemiological models that suggested if 95% of people wear masks and other social distancing measures are applied, Europe could avoid about 281,000 deaths by February. But he warned that relaxing measures could lead to a five-fold increase in deaths by January.

PRAGUE — The Czech Republic’s military will establish a hospital at Prague’s exhibition center to treat COVID-19 patients, the first such facility in one of the hardest-hit European countries.

Thursday’s announcement by Interior Minister Jan Hamacek comes amid a record surge of new coronavirus cases in the country that reached a record high of 9,544 a day earlier.

“We have to build extra capacity as soon as possible,” Babis said Thursday. “We have no time, the prognosis is not good,” Babis told reporters ahead of his trip to Brussels for an EU summit.

ATHENS, Greece — Greek civil servants have walked off the job in a 24-hour strike demanding, among other things, better pay for health and education workers and more hiring during the coronavirus pandemic.

The strike Thursday shut down public services across the country, while the participation of air traffic controllers forced airlines to cancel or reschedule flights until 8 a.m. Friday.

Hundreds of health care workers marched through central Athens ahead of the main strike demonstration set for the center of the capital later Thursday.

The country’s main civil servants’ union, ADEDY, called the strike over a series of demands, including an increase in health spending, more intensive care unit beds and new permanent hirings in education to let school classes be limited to 15 pupils.

Greece has been experiencing a resurgence in the pandemic that has increased pressure on the health system. The government has increased the number of intensive care unit beds available for coronavirus patients.

The country of around 11 million people has seen new daily coronavirus cases hovering around the 300 to 400 mark. It currently has a total of 23,495 confirmed cases, with 469 deaths.