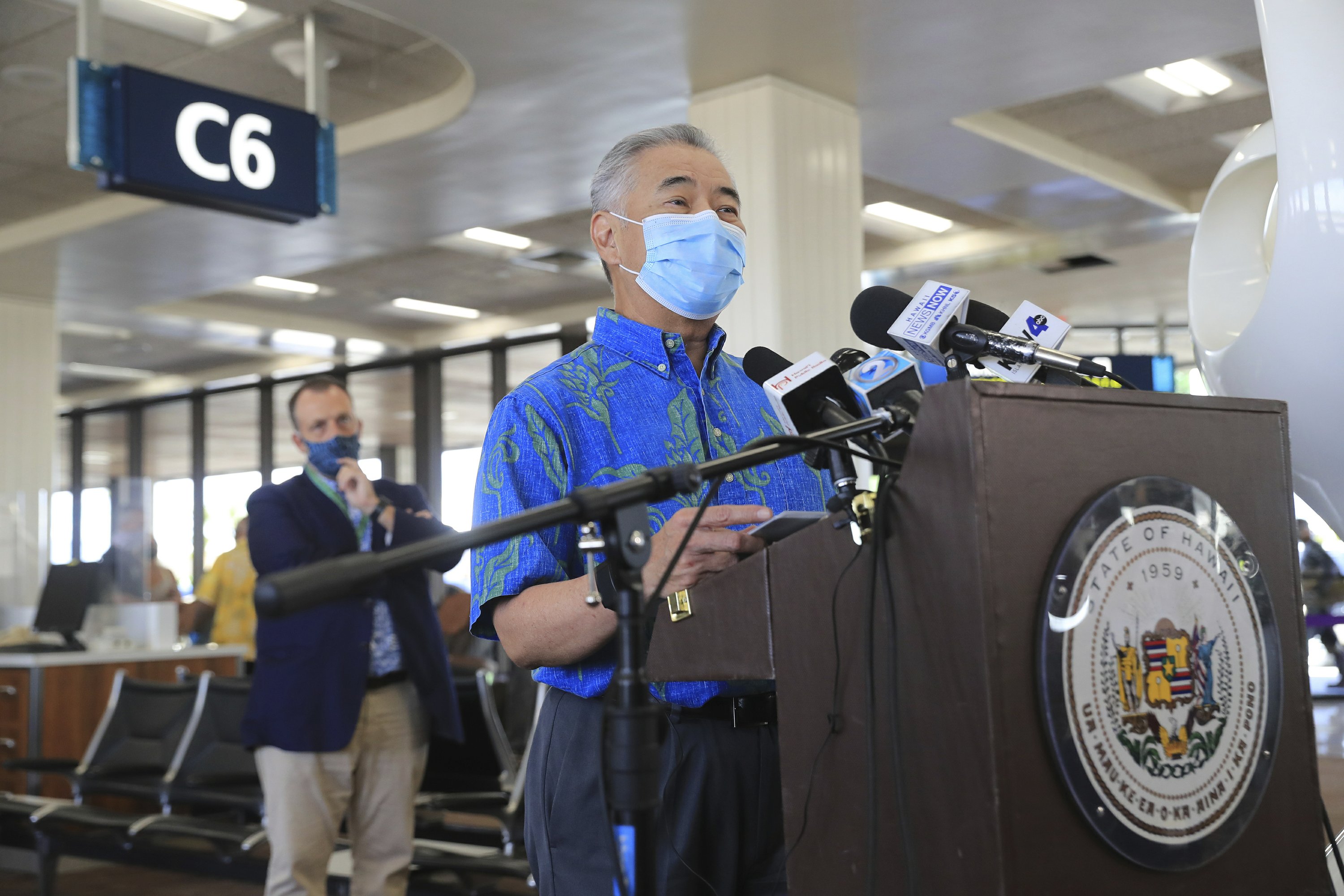 HONOLULU — About 8,000 people landed in Hawaii on the first day of a pre-travel testing program.

It allows travelers to come to the islands without quarantining for two weeks if they produce a negative coronavirus test. The state-run testing program is an effort to stem the devastating downturn caused by the pandemic on Hawaii’s tourism-based economy.

However, gaps in the program coupled with increasing cases across the U.S. and the world have raised questions about whether Hawaii is ready to safely welcome back vacationers.

Meanwhile, restaurant cards for unemployed workers are expected to begin arriving in Hawaii mailboxes on Friday. The $500 prepaid debit cards cover meals and purchases at bakeries and catering services. About 116,000 state residents have filed for unemployment insurance.

— U.S. testing 3 drugs to try to tamp down coronavirus

LONDON — Lancashire agreed to move into England’s most severe level of COVID-19 restrictions after striking a deal with the U.K. government on funds to implement the measures.

The deal means that the region of 1.5 million people will join the neighboring Liverpool region in the government’s highest risk tier, forcing pubs and bars to close. Restrictions on socializing also come into effect and residents are advised to minimize travel.

No deal is in sightfor Greater Manchester, which is holding out for more money to implement the measures targeted at areas with the highest infection rates. Foreign Secretary Dominic Raab has criticized Manchester Mayor Andy Burnham for “effectively trying to hold the government over a barrel over money and politics.”

SARAJEVO, Bosnia-Herzegovina — A leading Bosnian politician has tested positive for coronavirus as the country hit a record number of new cases.

Bakir Izetbegovic, the president of the Party of Democratic Action and a former Muslim member of the Bosnian three-member presidency, on Friday tested positive for COVID-19, his party said.

The 64-year-old has gone into isolation since taking a test after he felt mild symptoms of the virus, the Klix online portal said. He is recovering at home.

Health authorities reported a record 4,026 cases on Friday. There were 75 deaths, slightly below the all-time-high of 82.

The Health Ministry says 2,075 tested positive for the coronavirus on Thursday, up from the previous record of 1,929 set a day earlier.

Authorities say 834 people tested positive and four have died in the past 24 hours in the small country of 2 million people.

Authorities have introduced more restrictive measures starting Friday, including a partial lockdown in the regions most affected.

The measures include a ban on gatherings of more than 10 people and remote teaching in higher school grades.

WASHINGTON — U.S. government officials are launching a new study testing three drugs to tamp down an overactive response by the immune system that can cause severe illness or death in people with COVID-19.

The U.S. National Institutes of Health says the study will enroll 2,100 hospitalized adults with moderate to severe COVID-19 in the United States and Latin America. All will get the antiviral drug remdesivir plus one of the three “immune-modulating drugs” or a placebo.

The drugs are Bristol Myers Squibb’s Orencia and Johnson & Johnson’s Remicade, which are sold now for rheumatoid arthritis and an experimental drug from AbbVie called cenicriviroc. The drugs work in different ways to inhibit “cytokine storm,” an overproduction of chemicals the body makes to fight infections that can damage lungs, kidneys, the heart and other organs.

“These are all different ways of slowing down an overactive immune system,” said NIH director Dr. Francis Collins.

The new study is the fifth and final one in a series of experiments designed by a private-public partnership that includes dozens of drug companies, nonprofit groups and various U.S. government departments. Other therapies being tested include antibody drugs, anti-inflammatory medicines and plasma from COVID-19 survivors.

PARIS — French restaurants, cinemas and theaters are trying to figure out how to survive a new curfew aimed at stemming the flow of record coronavirus infections.

France registered more than 30,000 virus cases Thursday, its highest single-day rise since the pandemic began. There were nearly 200 cases per 100,000 people over the past week.

Culture Minister Roselyne Bachelot told Le Parisien newspaper she is negotiating for exceptions to a monthlong curfew between 9 p.m. and 6 a.m. across the Paris region and eight other metropolitan areas. The curfew comes into effect Friday at midnight, and France is deploying 12,000 extra police to enforce it.

“The French culture world isn’t invincible, it needs help,” author and filmmaker Yoann Sfar, who has a new movie coming out, said Friday on RTL radio.

One movie theater chain will start opening at 8 a.m. in hopes of making up evening losses. Since Paris restaurants generally open at 7 or 7:30 p.m. for dinner, some might close altogether because it no longer makes financial sense to stay open for such a short shift.

BUDAPEST, Hungary — The number of deaths in Hungary caused by the coronavirus hit a new record on Friday.

Hungarian health authorities reported 33 deaths in the past 24 hours, up from 29 a day earlier. The total number of confirmed infections since the outbreak of the pandemic stood at 41,732 and 1,085 deaths. The number of patients needing hospital treatment was 1,642, of whom 171 were on ventilators.

The government of Prime Minister Viktor Orban has implemented less severe measures than in other neighboring countries during the second wave of the contagion.

Hungarians are required to wear masks on public transportation, shops, malls and entertainment venues, as well state-run health care institutions. Restaurants and clubs close at 11 p.m. and visitors are banned from hospitals and nursing homes.

Policy makers have repeatedly stressed that shielding the economy from the fallout caused by the pandemic is a critical priority for the government.

GENEVA — Europe is at a “turning point” in the fight against the coronavirus, the head of Switzerland’s biggest hospital complex says, acknowledging growing public fatigue over anti-COVID measures but insisting people must buckle down as the country grapples with record daily case counts.

CEO Bertrand Levrat of Geneva University Hospitals, which counts 12,000 personnel, spoke to The Associated Press at a time when Switzerland — like many other European countries — is fighting a second wave of coronavirus cases. It’s believed the increase grew in large part out of a summertime lull in which people let down their guard about the highly infectious pandemic.

“The virus doesn’t spread alone — we are the ones who spread it. It’s a line that we don’t repeat enough,” Levrat said from his office overlooking Geneva, a surgical mask tucked into his jacket pocket. “Today, the stakes center on how much people are going to follow health measures that allow most people, and economies, and life in general to get through this.”

BRUSSELS — Belgian authorities are warning tighter restrictions are needed to help control the spread of the coronavirus.

Prime Minister Alexander De Croo will meet Friday with senior government officials to work out how to respond to a new wave of infections.

Yves Van Laethem, a spokesman for Belgium’s COVID-19 crisis center, says “new measures are needed, because we see all the figures, all the data, mounting and all the indicators … remain in the red.”

Belgium, which has a population of around 11.5 million people, is one of the European countries hardest hit by the disease. Almost 6,000 new cases were recorded each day on average over the last week. In all, about 192,000 people have contracted the disease and 10,327 people have died.

Almost 2,000 people are currently in hospital due to the virus, more than 300 in intensive care. Around 180 are being admitted every day, on average.

With the possibility of a curfew, as in neighboring France, or more confinement looming, Van Laethem urged people not to hit bars and night spots for a final party.

Until this week, Germany’s highest recorded figure was nearly 6,300 in late March, though testing has expanded vastly since then. Figures tend to peak around the end of the week, but the latest reading underlines a sharp upward trend in recent weeks.

Earlier this week, the federal and state governments agreed to toughen mask-wearing rules and make bars close early in areas where infections are high.

Germany has confirmed more than 348,000 total cases in since the pandemic began. There were 9,734 deaths, an increase of 24 from Thursday.

MILAN — The Italian region of Campania, which includes Naples, closed schools until the end of the month as the number of infections there surged above 1,000.

Italian health officials have declared the country in an “acute phase” after the country set records for new daily cases higher than during the March-April peak, when the death toll surged well over 900 in one 24-hour period.

The death toll Thursday rose to 83, one third of those in Lombardy, after days hovering at half that nationally.

Premier Giuseppe Conte expressed displeasure at Campania’s decision to shut schools, which opened only a month ago. Other regions have urged the government to allow distance learning for the upper grades of high school to take pressure off public transportation, which remains a major concern due to crowding.

LONDON — A top British scientist says continuing arguments about how and when to impose tighter restrictions to combat COVID-19 are damaging public health and leading to more economic hardship.

An infectious disease specialist who sits on the government’s scientific advisory committee says the U.K. needs to quickly implement tighter restrictions nationwide to slow the spread of the virus and limit broader damage to society.

Jeremy Farrar, director of the research funding charity the Wellcome Trust, says restrictions under the government’s current three-tier strategy aren’t tough enough to bring the virus under control and squabbling over where and when to impose the measures risks confusing the public.

“I think we’ve got to come together as a country,” Farrar told the BBC’s Newscast podcast. “The fragmentation and, frankly, making this either a north-south or a party political issue that’s a very, very dangerous route to go on.”

PRAGUE — Coronavirus infections in the Czech Republic have set a one-day record for the second straight day.

Hospitals across the country have been postponing nonvital operations to focus on the growing number of COVID-19 patients. The government says their full capacity could be reached around the end of October.

The Czech military will start build a field hospital at Prague’s exhibition center over the weekend for 500 patients. A similar plan is ready for the second largest city of Brno, while the government is negotiating with neighboring Germany and some other countries for Czechs to be treated there if the local health system is overwhelmed.