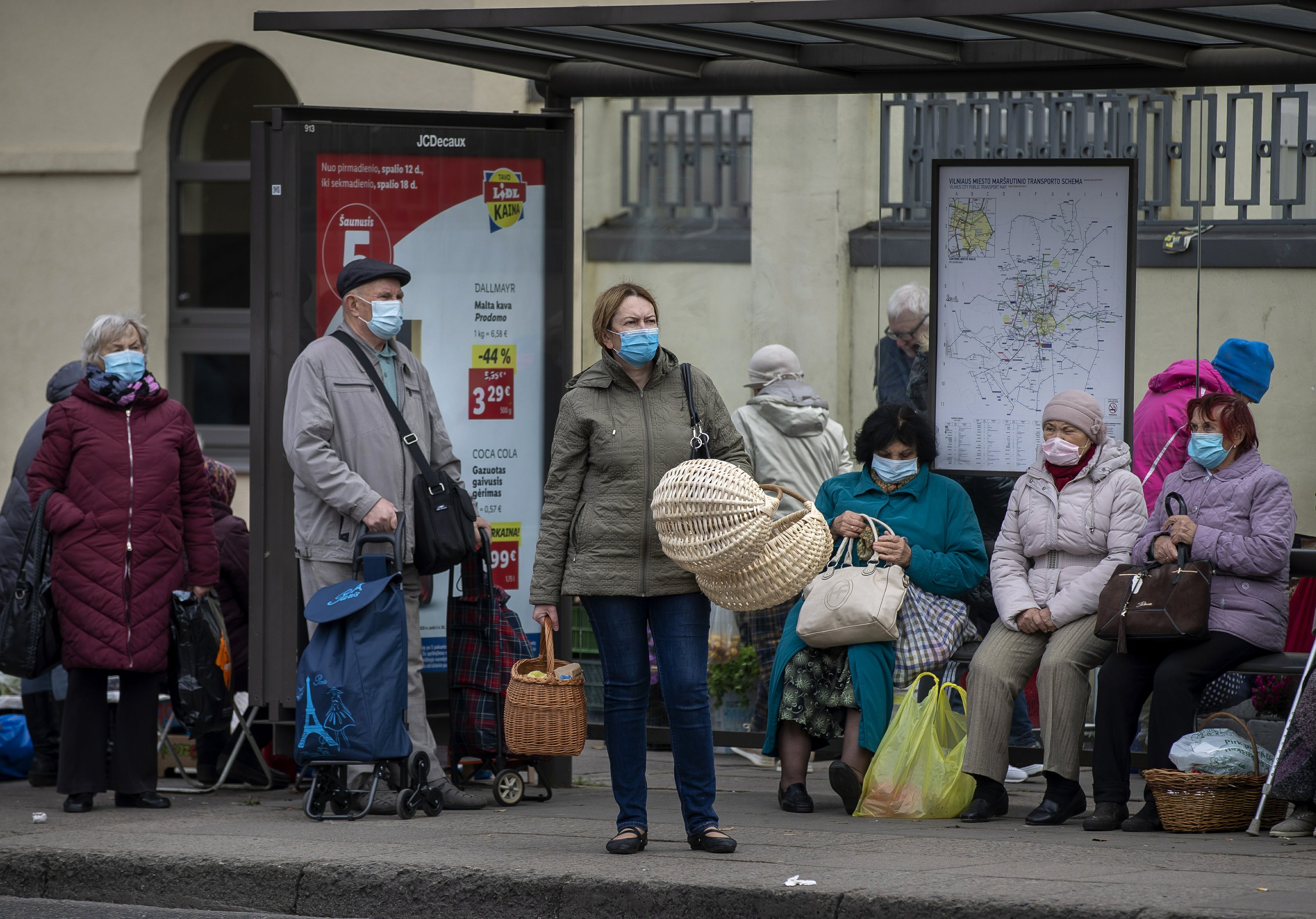 The state health department’s daily update showed Indiana’s seven-day rolling average of newly confirmed COVID-19 infections reached 1,799 as of Friday. That is the highest level the state has seen during the pandemic and has more than doubled over the past three weeks.

The 2,521 new infections reported Saturday, a daily high, marked the second straight day that figure topped 2,000 in a single day. The health department said the number was inflated by about 100 cases that weren’t previously included because of technical issues. The newly recorded deaths raise Indiana’s death toll to 3,918, including confirmed and presumed coronavirus infections, according to the health department.

Gov. Eric Holcomb cited the increase in cases on Wednesday when he said he would continue the statewide mask mandate for another month. Holcomb chastised those who resist wearing masks as disregarding the safety of others.

— President Donald Trump is showing new determination to minimize the threat of the virus that has killed more than 215,000 Americans and complicated his chances of re-election.

— A spike in cases in Europe deals a bitter blow to the economy.

— Rural parts of the American Midwest are seeing a surge in cases and hospitals are struggling to keep up.

— In Germany, Chancellor Angela Merkel warned of “difficult months” ahead as the nation posted another daily record of new cases Saturday.

— The Dutch royal couple has cut short a Greek vacation after an uproar back home.

Theaters in New York City aren’t included, and counties must have a positivity rate below 2% on a 14-day average and have no “cluster zones.”

Audiences will be restricted to 25% of capacity with a maximum of 50 people per screen, Cuomo said at his briefing. Masks will be required and there will be assigned seating to ensure social distancing.

This week, the Global Cinema Federation sent an open letter to Cuomo urging him to let theaters reopen, saying Hollywood studios may continue delaying their remaining 2020 releases if theaters remain closed. The group asked Cuomo to adopt a county-by-county plan for theater openings based on virus data, similar what it said California Gov. Gavin Newsom has done.

ATHENS, Greece — Greece has reported its 500th death from the coronavirus, as well as the second highest daily cases of the disease following Friday’s record.

Health authorities reported 482 new cases Saturday, as well as 10 deaths, a day after recording a record 508 new cases. The total number of confirmed coronavirus cases since the start of the pandemic is now 24,932, with 500 deaths.

Authorities pointed to violations in social distancing in bars and outdoor parties and added that the danger of transmission will only increase in cooler weather. Asked about a return to pre-pandemic normality, an epidemiologist advising the health ministry said that “an improvement in our daily lives” will take place only 7-8 months after the introduction of a vaccine, if it proves effective.

DENVER — Roughly seven months after the coronavirus cut the ski season short at the height of spring break, resorts across the U.S. and Canada are picking up the pieces and trying to figure out how to safely reopen this winter.

Resort leaders are asking guests to curb their expectations and to embrace a new normal while skiing amid a pandemic. That could mean skiing with face coverings, socially-distanced lift lines, no dine-in service, sharing lifts only with your group and no large gatherings.

Resorts, some of which are set to open at the beginning of November, are trying to avoid a repeat of last spring when many mountain communities were disproportionately hurt by the virus as travelers from all over the country and the world hit the slopes during one of the busiest times of the season.

ROME — The Vatican says someone who lives in the same Vatican hotel as Pope Francis has tested positive for coronavirus, adding to the 11 cases of COVID-19 among the Swiss Guards who protect him.

The Vatican said Saturday that the resident of the Domus Sanctae Marthae has moved out temporarily and is in isolation, as are all the people who came into direct contact with him.

The hotel serves as a residence for Vatican-based priests as well as visiting clerics and lay people. Francis chose to live there permanently after his 2013 election, shunning the Apostolic Palace, because he said he needed to be around ordinary people. The hotel has a communal dining room and chapel where Francis celebrates Mass each morning.

The Vatican, a tiny city state in the center of Rome, has beefed up its anti-COVID-19 measures amid a resurgence of the outbreak in Italy. Protective masks are required indoors and out, but Francis has largely shunned them even when holding audiences with the public.

At 83 and with part of a lung removed when he was in his 20s due to illness, the pope would be at high-risk for COVID-19 complications.

Last week, the Vatican confirmed a cluster of 11 cases among the Swiss Guards who serve as ceremonial guards at papal Masses, guard the Vatican City gates and protect the pope.

Italy added another 10,925 coronavirus infections to its official toll Saturday as the government mulls new national restrictions including curfews for bars and other measures intended to discourage large gatherings without a lockdown.

The health ministry reported Saturday that another 47 people died, bringing Italy’s official COVID-19 toll to 36,474, the second highest in Europe after Britain.

BRATISLAVA, Slovakia — Slovakia is acquiring 13 million rapid antigen tests for a mass testing of its population amid a record surge of coronavirus infections.

Prime Minister Igor Matovic says almost 6,000 testing sites will be established across the country for the testing that is scheduled to take place the next two weekends, starting with the three or four hardest-hit counties.

Matovic says it will be similar for citizens to going to cast ballots at elections. It’s unclear if the testing will be mandatory.

Antigen tests are less accurate than PCR tests, which are considered the gold standard, but have the advantage of producing faster results.

The nation of 5.4 million has been facing a record spike with the number of confirmed positive cases in one day surpassing 2,000 on Thursday.

The Slovak authorities have so far conducted a relatively low number of tests compared with other European countries. Just under 12,000 were carried out on Friday.

The country has a total of 28,268 confirmed cases and 82 people have died.

The country’s Health Ministry said tests found 1,538 new cases of the virus, pushing the overall number of cases to 114,387.

The ministry said another four people died from the virus, bringing the overall death toll to 459.

Recorded infections have soared again in recent weeks, as authorities have relaxed restrictions and resumed schools for in-person instruction. Dubai has reopened its airport for international travelers and embarked on an active campaign promoting itself as a tourism destination amid the pandemic.

The UAE is engaged in an aggressive testing campaign, with over 11 million tests conducted in a country home to over 9 million people.

PRAGUE — Coronavirus infections in the Czech Republic have surpassed 10,000 in one day for the first time, setting a new record high for the third straight day.

The Health Ministry says the day-to-day-increase of the new confirmed cases surged to 11,105 on Friday. It is almost 1,400 more than the previous record set a day earlier.

After a series of new restrictive measures adopted by the government to slow down the surge, Health Minister Roman Prymula said he still expected a rise of those tested positive for about two weeks.

If the new measures fail to make an impact, the number of new cases could reach a quarter of million in the second half of October, the Health Ministry predicted.

BEIJING — Qingdao, a coastal city in eastern China, has completed coronavirus testing for its 11 million residents following an outbreak and found no new infections so far.

As of Friday, the 10.9 million samples came back negative.

The citywide testing was ordered after 13 people were infected in China’s first locally transmitted cases in over two months.

The source of the outbreak was traced to two dock workers who had tested positive for the virus in September but did not exhibit any symptoms at first. They had visited a hospital in Qingdao and were sent to a CAT scan room, which was not disinfected properly afterward and led to the infection of other patients, according to health officials.

Health Commission Director Sui Zhenhua and Deng Kai, president of Qingdao’s thoracic hospital to which the cases have been linked, have been placed under investigation in connection with the outbreak.

NEW DELHI — India reported 62,212 new cases in the past 24 hours, raising its total to more than 7.4 million and continuing a downward trend.

According to the Health Ministry, India’s average number of daily cases dropped to 72,576 last week from 92,830 during the week of Sept. 9-15, when the virus peaked. It is recording an average of around 70,000 cases daily so far this month.

But some experts say India’s figures may not be reliable because of poor reporting and inadequate health infrastructure. India is also relying heavily on antigen tests, which are faster but less accurate than traditional RT-PCR tests.

Health officials have warned about the potential for the virus to spread during the religious festival season beginning later this month. Health Minister Harsh Vardhan told reporters on Friday that the next two months were particularly crucial because of the winter season and festivals.

MELBOURNE, Australia — Australia’s Victoria state has reported just one new case of COVID-19 and no deaths as the city of Melbourne moves closer towards the easing of some lifestyle restrictions.

The state’s coronavirus death toll remains at 816 and the Australian total is 904.

Melbourne residents are expecting COVID-19 restrictions to be eased on Sunday but it is unclear how much freedom will be regained.

Victoria Premier Daniel Andrews has indicated the changes would be more “in the social space,” prompting pleas from business operators for relief from restrictions that once included an overnight curfew.

Current restrictions include a two-hour exercise limit within 5 kilometers (3 miles) of work or home and mandatory face masks covering the mouth and nose when a person leaves their home.

SALT LAKE CITY — One of Utah’s largest hospitals had no beds left Friday in its regular intensive-care unit as the governor declared the state’s weekslong spike in coronavirus cases “unsustainable.”

The University of Utah Health had to set up extra ICU beds staffed by doctors and nurses working overtime to care for its critical patients this week as the unit hit 104% capacity, said Chief Medical Officer Dr. Russell Vinik.

“We’ve cut back where we can but it’s precarious,” he said. “We are very concerned about flu season, particularly if people don’t get vaccinated. We can’t take another hit.”