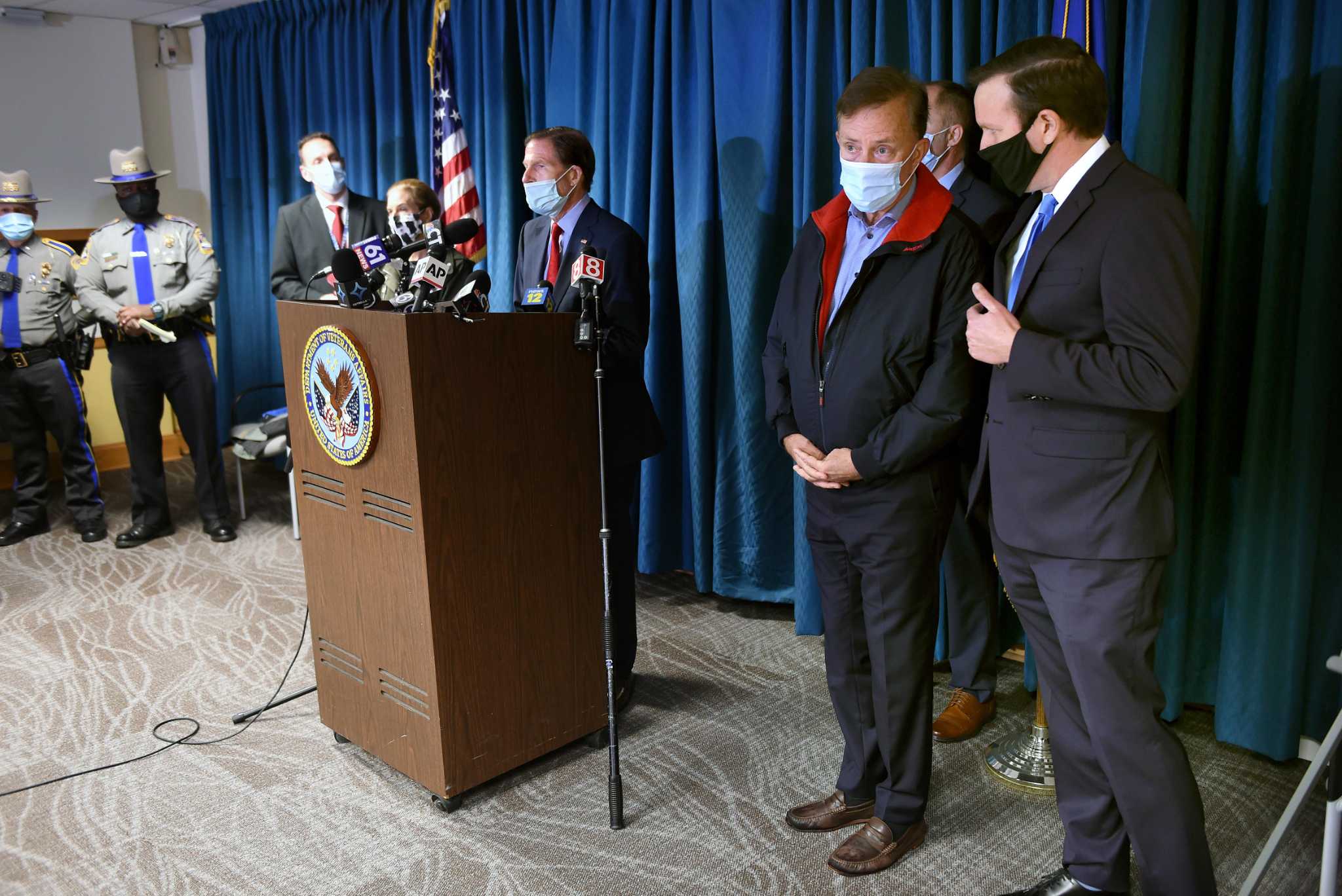 Several of the state’s top elected officials are self-quarantining after the governor’s spokesman tested positive for COVID-19. This comes as governors from around the Northeast are set to meet virtually as soon as Sunday to discuss how to deal with increased spread of the virus around the region.

Sens. Richard Blumenthal and Chris Murphy, in addition to Lt. Gov. Susan Bysiewicz, said Saturday they would self-isolate following a public appearance on Friday that included Gov. Ned Lamont. The governor made a similar announcement Friday evening after it was learned that his spokesman, Max Reiss, tested positive for the virus.

“I hope all of the Governor’s staff is doing OK,” Sen. Richard Blumenthal tweeted Saturday. “Although I didn’t come into close contact, as defined by the CDC, with the staffer who tested positive, I’ve just returned from being tested myself and am currently self-isolating.”

Paul Mounds, Gov. Ned Lamont’s chief of staff, did not identify more people who are in a quarantine after Reiss’ positive test result on Friday from a regular Thursday test. He said Lamont and staff members expect to submit test samples again on Monday.

“We are in the contact tracing process based on the interviews with Max about who he’s been around,” Mounds said, naming Reiss only because Reiss identified his circumstances Friday night in a tweet.

Blumenthal, Bysiewicz, Lamont and other officials gathered at the Veterans Affairs medical center in West Haven on Friday following an explosion that killed two people and injured three more.

“I attended an event yesterday with the Governor but was not in close contact with the staff member who tested positive,” Murphy tweeted Saturday. “Out of an abundance of caution, though, I am isolating until I get tested and consult with the Office of Attending Physician Monday morning.”

Guidelines from the Centers for Disease Control and Prevention state that people should quarantine or get tested if they were within six feet of someone who has COVID-19 for a total of 15 minutes or more.

Bysiewicz said in a statement she and her communications director Samantha are isolating “out of an abundance of caution” and “have plans to continue to be tested throughout the following week and will remain in constant communication with the Department of Public Health Commissioner to ensure every precaution is taken.”

Lamont was planning a two-week self-quarantine, according to his staff. The governor and his senior staff are tested twice weekly — Monday and Thursday — for the virus. Only Reiss’ test came back positive, an official in the governor’s office said.

“The governor will immediately begin the process of self-quarantining, as will multiple members of the governor’s senior staff, including [Chief of Staff Paul] Mounds and Chief Operating Officer Josh Geballe,” Lamont’s office said in a news release sent late Friday night.

The governor’s spokesman tweeted a statement Friday night, saying he was unsure of how he contracted the virus, but noted he’d been self-quarantining due to an exposure his children had at school.

“None of us are experiencing any symptoms. We all received follow-up tests this weekend, but will quarantine for the next two weeks. I also wear a mask during any and every public interaction, but as you all know, transmission can happen anywhere,” he added.

Governors from Connecticut, New York, New Jersey, Rhode Island, Massachusetts, Delaware and Pennsylvania could meet as soon as Sunday after their chiefs of staff met virtually Saturday. The meeting comes as the surge of confirmed positive cases of coronavirus continue throughout the region and country.

Connecticut’s seven-day rolling average now shows more than 1,200 new cases a day, with a positivity rate just over 4 percent. The state saw 11 additional deaths linked to the virus on Friday and an additional 42 hospitalizations. The United States continues to set records, with each of the last tree days bringing more than 150,000 new cases, according to the Covid Tracking Project.

The governors are sharing information more intensely, “understanding early the pressure points,” Mounds said, “whether or not there are more decisions that need to come down the pike.”

Some of the seven states that had chiefs of staff connect Saturday, for example, have not dialed back event capacity sizes as much as Connecticut has.

It’s unclear what Connecticut might do to tighten rules.

“Right now it’s too early to tell,” Mounds said. “The main focus of today’s meeting was to share notes.”

The states are focusing on college students traveling back home for Thanksgiving. With that in mind, the state sent a letter to all colleges in Connecticut, reminding them to follow procedures such as testing and quarantines.

All of the seven states have seen spikes in recent days and all of those spikes except New York have crossed over the threshold of 300 new daily cases per 1 million residents. Rhode Island has by far the largest per-capita number of new cases, crossing over 600 per million in each of the last two days.