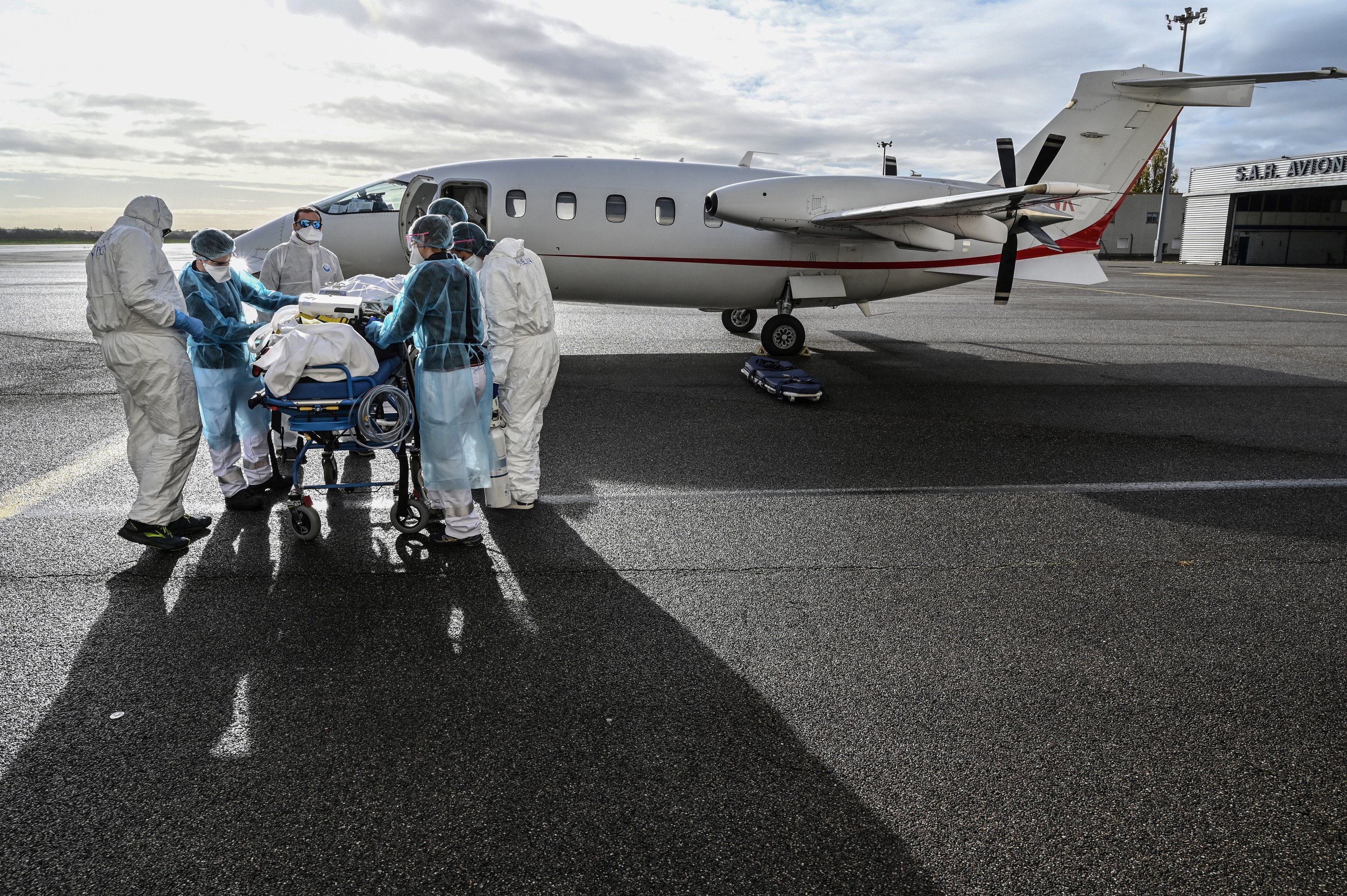 TRENTON, N.J. — New Jersey Gov. Phil Murphy says he will be reducing indoor and outdoor gathering limits because of the COVID-19 resurgence.

The Democrat told MSNBC on Monday that he will order indoor gatherings to fall from 25 to 10 and outdoor get-togethers from 500 to 150 people. The new indoor limit goes into effect Nov 17, while the outdoor level kicks in Nov. 23.

The lower levels come just before Thanksgiving and ahead of the winter holidays.

New Jersey’s coronavirus levels have been spiking, which Murphy has said amounts to a “second wave.”

The average increase over the first seven days of this month reached roughly 2,135, up from about 590 cases a day in early October. The average caseload increase for the first week of September was nearly 340 cases, according to state Health Department figures.

— More good news about a second COVID-19 candidate vaccine as Moderna says its shots appears to be 94.5% effective, according to preliminary data

LANSING, Mich. — Gov. Gretchen Whitmer says she has the authority to issue a second stay-at-home order to curb spiking coronavirus infections if necessary.

The Democratic governor spoke a day after announcing limits amid a surge of COVID-19 cases that has led to increased hospitalizations and deaths. She has urged the public to “double down” with precautions to avoid a shelter-in-place order like what was instituted in the spring.

Under the new restrictions that start Wednesday, Michigan high schools and colleges must halt in-person classes, restaurants must stop indoor dining and entertainment businesses must close for three weeks. Gathering sizes also will be tightened.

Sweden has placed a nationwide limit of eight people for all gatherings in an effort to bring down coronavirus infections. The limit takes effect Nov. 24 and will last for four weeks.

Prime Minister Stefan Lofven on Monday urged fellow Swedes to cancel plans and stay at home because a ban is needed now more than ever to curb a record number of coronavirus infections in recent weeks that are burdening the country’s healthcare system.

Sweden had opted for a different – and much debated – approach to handling the pandemic by keeping large sections of society open.

But Lofven told a news conference that the situation will get worse and appealed to Swedes to “do your duty” and “take responsibility to stop the spread” of COVID-19.

The Swedish government said last week that it would impose a nationwide, 10:00 pm ban on the sale of alcohol in bars, restaurants and night clubs as of Nov. 20.

WASHINGTON — The United States’ top infectious disease expert says news from Moderna that its COVID-19 vaccine candidate is 94.5% effective “is really quite impressive.”

Dr. Anthony Fauci, head of the National Institute of Allergy and Infectious Diseases, told NBC’s “Today” on Monday that Moderna’s finding, along with similar results from Pfizer last week for its vaccine, “is something that foretells an impact on this outbreak.”

“So now we have two vaccines that are really quite effective, so I think this is a really strong step forward to where we want to be about getting control with this outbreak,” Fauci said.

Asked about the timeline for vaccinating people, Fauci projected that by the end of December, there will be doses available for people at high risk from the coronavirus.

Fauci said the Moderna and Pfizer vaccines have different platforms than other vaccines now in the pipeline. But he said the other vaccine platforms are using the “spike protein” of the coronavirus which has been researched very intensively, giving him hope that more than two of these vaccines will also be effective.

A second COVID-19 candidate vaccine is offering more good news about prospects to beat back the spread of the virus. Amid a coronavirus surge in the U.S. and around the world, Moderna said Monday its shots provide strong protection against the disease.

Moderna said its vaccine appears to be 94.5% effective, according to preliminary data from the company’s still ongoing study. A week ago, competitor Pfizer Inc. announced its own COVID-19 vaccine appeared similarly effective — news that puts both companies on track to seek permission within weeks for emergency use in the U.S.

If the Food and Drug Administration allows emergency use of Moderna’s or Pfizer’s candidates, there will be limited, rationed supplies before the end of the year. Both require people to get two shots, several weeks apart.

BRUSSELS — The European Commission says it has sealed an agreement to buy up to 405 million doses of an experimental coronavirus vaccine developed by the German bio-tech company CureVac.

The European Union’s executive arm said Monday that it’s also close to clinching a deal with U.S. firm Modena, whose COVID-19 vaccine appears to be 94.5% effective, according to its preliminary data.

Commission President Ursula von der Leyen said Monday that her services will authorize the contract with CureVac on Tuesday on behalf of the 27 EU countries.

She says that “if the vaccine has proven safe and effective against COVID-19, every (EU) member state will receive the vaccine at the same time on a pro rata basis and under the same conditions.”

It’s the fifth such contract with a potential vaccine supplier and comes after the commission signed a deal last week to secure up to 300 million doses of BioNTech and Pfizer’s experimental vaccine.

Von der Leyen says the commission has already concluded exploratory talks with Moderna and that it’s hoped that the contract will be finalized soon.

THESSALONIKI, Greece — A senior clergyman in Greece’s Orthodox Church was buried after dying of COVID-19. Monday’s burial of Metropolitan Bishop Ioannis of Lagadas has revived a debate over the safety of receiving communion ahead of the Christmas holiday.

The 62 year-old Bishop was an outspoken advocate of maintaining communion ceremonies — at which worships are given bread as well as wine with a shared spoon — during the pandemic, arguing that there was no risk of transmission.

The town of Lagadas, outside Greece’s second-largest city of Thessaloniki, is a northern region currently experiencing the highest rate of infection in the country.

Churches across Greece are currently closed as part of a three-week lockdown introduced nationwide on Nov. 7, but are due to reopen ahead of the Christmas holidays.

The Church’s governing Holy Synod said Monday that it was complying with public safety restrictions, and hit back at commentators and critics who have accused the church of acting irresponsibly.

PRAGUE — The Czech government is asking Parliament to approve a plan to re-extend a state of emergency in order keep in place restrictions aimed at fighting the pandemic.

The Parliament is expected to vote on Thursday for another extension that will last until Dec 20.

The country of 10.7 million has been among the hardest hit by a new surge of coronavirus infections but the number of new cases has been declining since Nov 4.

The Czech Republic had 460,116 confirmed cases. Currently, 7,200 COVID-19 patients are in hospitals and 1,099 need intensive care. Those numbers have only slightly dropped from a maximum about two weeks ago, still putting the health system under strain.

The death rate is still high with 2,711 fatalities registered in November out of a total of 6,208.

MOSCOW — Coronavirus infections in Russia have hit a new record as a region in Siberia has shut down some non-essential businesses for two weeks in an effort to curb the spread of the disease.

Russia’s state coronavirus task force reported 22,778 new coronavirus cases on Monday and a total of over 1.9 million confirmed infections. The task force has also registered nearly 33,500 COVID-19 deaths. The resurgence of the virus has swept through the country since September, with the number of daily new cases increasing from roughly 5,000 in early September to over 22,000 this week.

Russian authorities have said there were no plans to introduce a second nationwide lockdown, but on Monday the Siberian republic of Buryatia became the first region to close a wide range of non-essential businesses.

Buryatia authorities have ordered shut cafes, restaurants, bars, malls, cinemas, beauty parlors and saunas starting Monday and until the end of the month. Grocery stores, pharmacies and shops selling essential goods will be allowed to operate.

LONDON — British Health Secretary Matt Hancock says he hopes that all nursing homes in England will be able to test visitors for coronavirus to allow them to see their loved ones “by Christmas.”

A pilot program in 20 nursing homes in the southern counties of Cornwall, Devon and Hampshire began Monday. Under it, regular testing will be offered to one family member or friend per resident, which the government hopes will support visits when combined with other COVID-prevention measures such as wearing masks and social distancing.

Hancock told BBC radio that the rollout will be “a challenge but we’ve got to make sure the right rules and protocols are in place so that the testing keeps people safe.”

Around 20,000 people are thought to have died in Britain’s nursing homes during the first wave of the pandemic. Most of the country’s nursing homes are run by the private sector.

BRUSSELS — Belgian health authorities hope that at least 70 percent of the country’s population will get vaccinated against COVID-19 once shots are available.

Following a meeting Monday focusing on the coronavirus pandemic, Belgium’s federal and regional health ministers agreed that vaccines will be fee for all, and not mandatory. They said in a statement they want “at least eight million Belgians” to get vaccinated.

The ministers said priority population groups will be defined on the basis of medical advice.

One of the hardest-hit countries in Europe, Belgium has reported more than 535,000 confirmed virus cases and more than 14,400 deaths linked to the coronavirus.

One of the hardest-hit countries in Europe, Belgium has reported more than 531,000 confirmed virus cases and more than 14,400 deaths linked to the coronavirus. During the first wave of the pandemic last spring, the European nation of 11.5 million people recorded a majority of its COVID-19-related deaths in nursing homes.

Between March and October, Amnesty International said “a staggering” 61.3% of all COVID-19 deaths in Belgium took place in nursing homes. The group said authorities weren’t quick enough in implementing measures to protect nursing home residents and staff during this period, failing to protect their human rights.

Amnesty International said one of the reasons so many people died in homes is because infected residents weren’t transferred to hospitals to receive treatment.

LONDON — British Prime Minister Boris Johnson says he is as “fit as a butcher’s dog” after being instructed to self-isolate for 14 days because he recently came in contact with someone who has since contracted coronavirus.

In a video message posted Monday on Twitter from his London apartment at Downing Street, Johnson said it didn’t matter that he has already endured COVID-19 and is “bursting with antibodies.”

The quarantine requirement comes at the start of a crucial week for Johnson’s Conservative government that includes discussions over a post-Brexit trade deal with the European Union. Negotiators are meeting in Brussels this week with time on a deal fast running out.

Johnson, who contracted the virus in April and spent three days in intensive care as his symptoms worsened, met with a small group of lawmakers for about a half-hour on Thursday, including one, Lee Anderson, who subsequently developed symptoms and tested positive.

Health Secretary Matt Hancock said it was right that the prime minister goes into self-isolation even though he’s already had coronavirus as people “can catch it twice.”