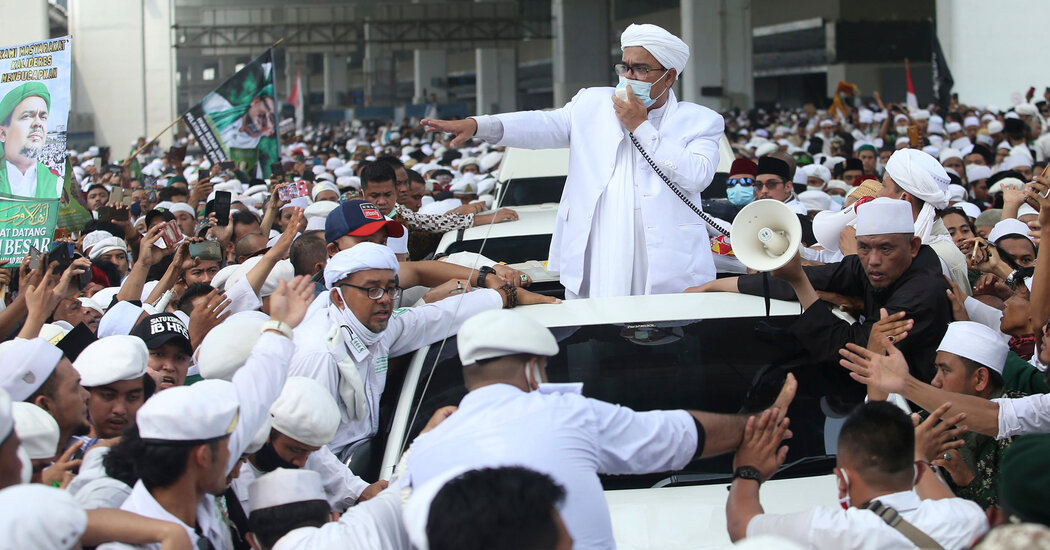 A radical Islamic leader returned to Indonesia last week from self-imposed exile in Saudi Arabia to spread his idea of a “moral revolution.” But health experts worry that he is doing more to spread the coronavirus.

The cleric, Rizieq Shihab, and his backers have held gatherings after his arrival Tuesday that attracted thousands of people, including a chaotic welcome at Jakarta’s Soekarno-Hatta International Airport that clogged airport roads and the international terminal.

The events ignored social-distancing requirements and limits on the size of gatherings. They also demonstrated the influence of Mr. Rizieq, the founder of the Islamic Defenders Front, which was once best known for raiding bars and smashing alcohol bottles.

Mr. Rizieq, who claims to be a descendant of Muhammad, has maintained a large following despite fleeing the country in 2017 while facing a pornography charge over salacious text messages with a woman who was not his wife. The charge has since been dropped.

Mr. Rizieq hosted a wedding for his daughter Saturday that drew about 10,000 guests. The government’s coronavirus task force, rather than ordering that the wedding be canceled, donated 20,000 masks and gallons of hand sanitizer for the event.

On Monday, two high-ranking police chiefs were fired for their mishandling of the events. Mr. Rizieq was fined about $3,500 on Sunday for flouting coronavirus regulations at the wedding — a token amount for him and his organization.

The police also announced that they would question Jakarta’s governor, Anies Baswedan, an ally of Mr. Rizieq, about his role in allowing the wedding to take place. The two met last week after the cleric’s return.

“I want to emphasize that the safety of the people is the highest law,” Indonesia’s president, Joko Widodo, said in a statement released after the chiefs’ firings were announced. “During this pandemic we have decided on social restrictions, including the dispersal of crowds.”

Mr. Rizieq, who apparently left Saudi Arabia because the government did not extend his residence permit, said he planned to travel around Indonesia promoting his ideas of strict adherence to Islam. The possibility that he could draw large crowds was another concern for health experts.

Indonesia, which has the world’s fourth-largest population, reports nearly half a million cases and more than 15,000 deaths, the worst record in East Asia.

But health experts say that Indonesia’s testing is too limited and that it is missing far more cases of the virus than it finds.

Pandu Riono, an epidemiologist at the University of Indonesia, says the total could be 10 to 20 times higher than the official number, putting it at five million to 10 million cases.

Dicky Budiman, an Indonesian epidemiologist at Australia’s Griffith University, estimated that the total is at least three times higher, about 1.5 million cases.

“We are already experiencing a silent outbreak in the community,” Dr. Budiman said. “We will face a serious problem when the most vulnerable get this virus.”