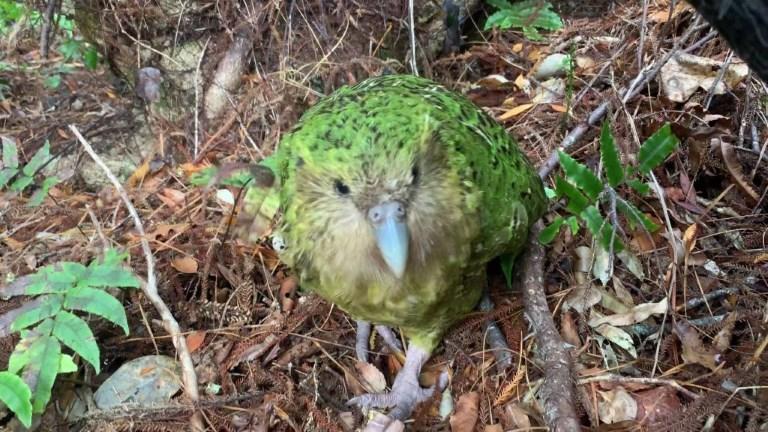 With an owl-like face, pot belly and duck-waddling gait, the kākāpō is one of the most distinctive birds roaming the Earth. And this November, the feathery creature has been named New Zealand’s Bird of the Year for an unprecedented second time.

Kākāpō, meaning “night parrot” among the Māori people, is the heaviest and longest-living parrot in the world — with a lifespan reaching 90 years. Found only in New Zealand and commonly dubbed “the mighty moss chicken,” the green-feathered bird is also nocturnal and cannot fly, but climbs well.

Forest & Bird, a independent conservation organization in New Zealand, has been holding elections for Bird of the Year for 15 years. This year, the competition received over 55,500 votes.

One of the goals of the election is to spread awareness of endangered species, including kākāpōs, which the New Zealand Department of Conservation classifies as critically endangered. There are only 209 alive today.

“We hope that Bird of the Year helps to raise awareness for our native birds, their habitats, and the threats they face,” writes Forest & Bird. “Tragically, many species are in danger of becoming extinct, so they need all the recognition they can get.”

One kākāpō that has received international fame, Sirocco, has been named “New Zealand’s official Spokesbird for conservation.” In 2009, Sirocco became an internet sensation after his mating attempts with zoologist Mark Carwardine’s head were caught on video during filming for the BBC documentary Last Chance to See.

“My kākāpo brothers and sisters have won @Forest_and_Bird’s Bird of the Year…Thanks to all of our human friends who voted,” read Sirocco’s Twitter in a Monday post, encouraging fans to learn more about conversation efforts.

BREAKING NEWS: In a stunning upset the kākāpō swoops in from behind to claw the title of #BirdOfTheYear 2020 away from competition front-runner – the toroa/Antipodean albatross.

The kākāpō makes history as the first bird to win Bird of the Year twice! pic.twitter.com/IFrsVvbkPU

The win didn’t come without scandal, however. According to a statement from Forest & Bird, 1,500 fraudulent votes were found for another bird candidate, the kiwi pukupuku/little-spotted kiwi, and were removed from the competition.

In addition, according to the Guardian, the endangered toroa/antipodean albatross actually won most first-choice votes — but, under the competition’s preferential system, the kākāpō finished victorious.

“In a stunning upset the kākāpō swoops in from behind to claw the title of #BirdOfTheYear 2020 away from competition front-runner – the toroa/Antipodean albatross. The kākāpō makes history as the first bird to win Bird of the Year twice!” Forest & Bird tweeted Sunday, referring to Kākāpō’s first win in 2008.