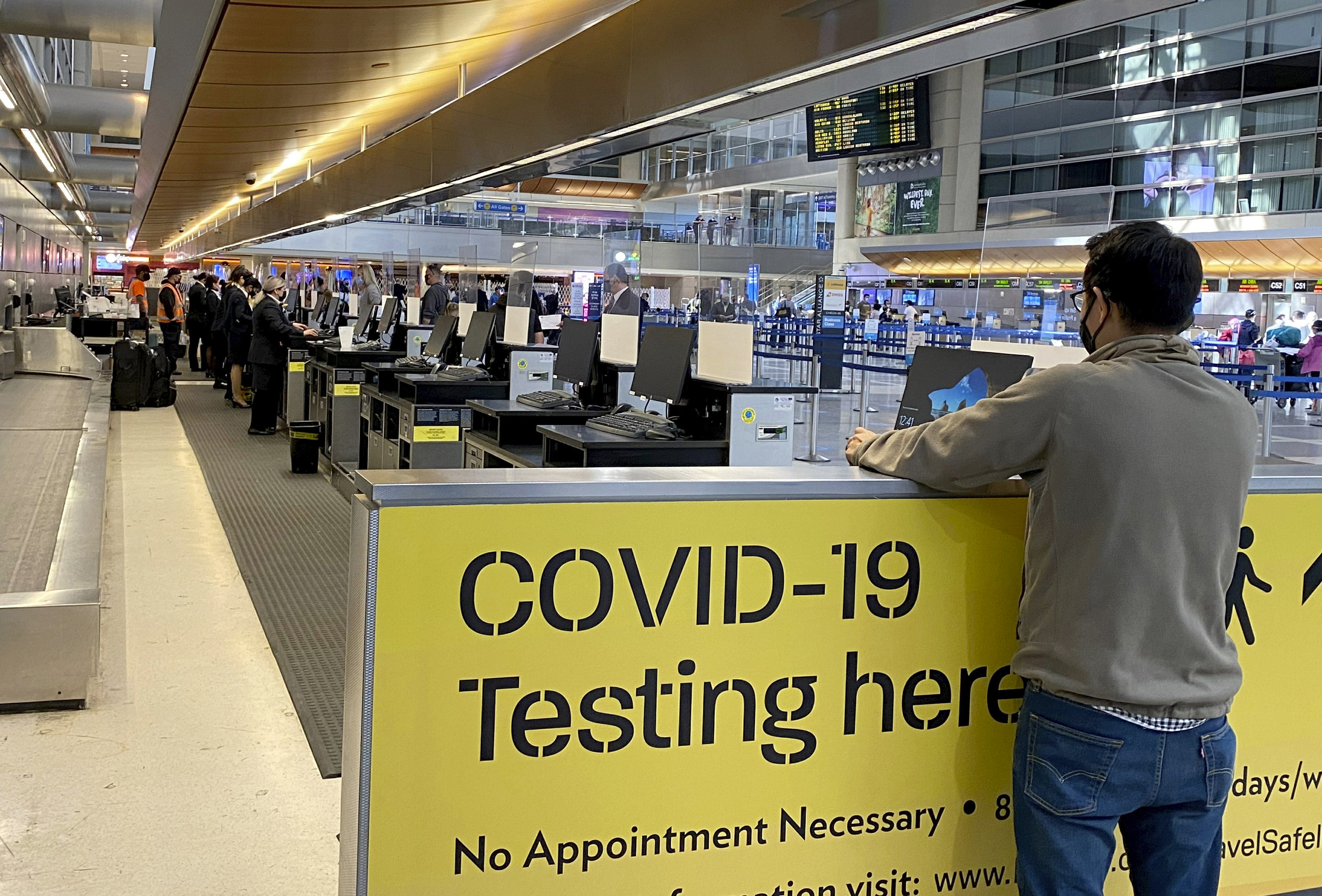 LOS ANGELES — Los Angeles County has imposed new restrictions on businesses and is readying plans for a mandatory curfew for all but essential workers if coronavirus cases keep spiking.

The county of 10 million people has seen daily confirmed cases more than double in the last two weeks to nearly 2,900.

On Tuesday, officials ordered non-essential retail businesses to limit indoor capacity to 25% and restaurants to 50% capacity outdoors. All such businesses must close by 10 p.m. The changes take effect Friday.

If daily cases rise to 4,500 and hospitalizations top 2,000, the county will impose a three-week lockdown that will restrict people to their homes for all but essential trips. A nighttime curfew would run from 10 p.m. to 6 a.m.

— Some vaccines may be nearing the finish line, but scientists say it’s critical that enough people volunteer to help finish studying other candidates.

— States in the U.S. are renewing their push for more federal money to deal with the fallout from the coronavirus outbreak.

WASHINGTON — The White House coronavirus task force is warning of “aggressive” and “unrelenting” spread of the coronavirus as the nation heads into the Thanksgiving holiday.

A senior administration official said Tuesday that scientists and public health experts sounded alarm about the spread of the virus, which is on the upswing across the entire nation.

In its weekly report, the task force says there is “aggressive, unrelenting, expanding broad community spread across the country, reaching most counties, without evidence of improvement but rather, further deterioration.”

It says existing efforts to slow the spread “are inadequate and must be increased to flatten the curve.” The panel also says Thanksgiving travel and gatherings could “amplify transmission considerably.”

The guidance is a departure from the public comments of President Donald Trump and Vice President Mike Pence, who have emphasized progress in vaccine development. But experts warn that tens of thousands of Americans will die before there is widespread distribution of a vaccine.

CHICAGO — Public schools in Chicago will resume in-person learning beginning in January, with officials saying remote learning instituted in March due to the coronavirus pandemic has not well-served many students.

Officials said Tuesday that pre-kindergarten and students enrolled in intensive and moderate cluster classrooms will begin in-person learning Jan. 11. Kindergarten through 8th grade students will return to classrooms Feb. 1. A return date for high school students is still under consideration.

The school district will allow parents to decide whether they want their children to return to school. Chicago Mayor Lori Lightfoot says in a statement that many students did well with remote learning but the youngest children, Black and Hispanic students, and highest-need learners haven’t been served.

NEW ORLEANS — The raucous Mardi Gras parades where riders on elaborate floats toss trinkets to adoring throngs have been canceled in New Orleans because the close-packed crowds could spread the coronavirus.

At least for the 2021 season, the pandemic has put an end to the New Orleans Mardi Gras as it has long been celebrated. City spokesman Beau Tidwell said Tuesday that no parades will roll during the weeks leading up to and including Fat Tuesday because they can’t meet restrictions meant to slow the spread of the novel coronavirus that causes COVID-19.

The cancellation is based largely on a 250-person cap on outdoor crowds. Tidwell says: “You can’t have traditional parades with that small a group.”

ANNAPOLIS, Md. — Maryland Gov. Larry Hogan is imposing limits for operating hours and capacity of businesses amid a surge in coronavirus cases. He said Tuesday that “we’re in a war right now, and the virus is winning.”

Beginning at 5 p.m. Friday, bars and restaurants have to close by 10 p.m. Retail businesses, religious institutions, personal services, fitness centers and social clubs will be limited to 50% capacity.

In addition, state health officials have barred barring all hospital visitation, except for end-of-life care, obstetrics, parents or guardians of minors, and support for people with disabilities.

JACKSON, Miss. — Mississippi health officials have released statistics showing that newly confirmed cases of coronavirus infections among students in the state have just about doubled in a week.

The number of students who tested positive increased from 579 during Nov. 2-6 to more than 1,000 for Nov. 9-13. Last week, schools reported 70 outbreaks, which is defined as more than three cases over the course of two weeks.

Officials said Tuesday that more than 14,000 students in Mississippi have been placed in quarantine within the last week. That’s compared with about 9,000 students during the previous week.

LONDON — The British government says another 598 people across the U.K. have died after testing positive for the coronavirus, the highest daily figure since May.

Since the onset of the pandemic, daily death figures released on Tuesday have invariably been higher than the 7-day average because of an evident weekend reporting lag effect.

The daily increase takes the country’s total to 52,745, the highest virus-related death toll in Europe. The actual toll is believed to be higher as the government tally only includes those who died within 28 days of testing positive for the virus and doesn’t include those who died without having been tested.

The government also said another 20,051 people tested positive for the virus. That is the lowest level in two weeks and marks the fifth straight daily decline. There have been signs in recent days that the restrictions imposed across the U.K., particularly the current lockdown in England, are helping to suppress the virus’ spread.

COLUMBIA, S.C. — South Carolina Attorney General Alan Wilson said he placed himself in quarantine Tuesday after finding out he was near someone who tested positive for COVID-19.

Wilson said he feels fine and has no symptoms, but will take the precaution to isolate himself and work from home to follow federal health guidelines.

Wilson’s statement did not specify who the Republican attorney general was in close contact with.

COVID-19 cases in South Carolina are rising again after an outbreak this summer. The seven-day average number of new daily cases is above 1,400 for the first time since early August. During the pandemic’s first peak in July, the average was more than 1,900 new cases a day.

South Carolina Lt. Gov. Pamela Evette announced she had COVID-19 back in September.

The first-term Democrat said Tuesday that he hopes the limits will help curb soaring coronavirus cases in the state.

Starting Friday, retail stores must lower capacity to 25% from the current 50%. Grocery stores will be excluded. Pritzker says hospitals are starting to see a real strain and will soon be overwhelmed if the current infection rate continues.

SIOUX FALLS, S.D. — The largest city in South Dakota appears ready to reverse course and pass a mask mandate Tuesday after enforcement was removed from the ordinance and medical groups said hospitals have exceeded capacity dealing with COVID-19 patients.

Sioux Falls Mayor Paul TenHaken, who cast a tie-breaking vote against a mandate last week, said he was ready to get behind the requirement after the state’s largest physicians’ organization and a hospital system came out in support.

The ordinance faces a City Council vote Tuesday night. But the council said violations of the requirement, which applies to retail businesses and public buildings, will not carry any penalty.

Just over 1,000 people tested positive for the coronavirus in the state, and the number of hospitalizations increased to 582 people, pushing some facilities close to capacity.

PARIS — France has surpassed 2 million confirmed cases of coronavirus, the fourth-highest total in the world.

The United States leads with 11.2 million cases, followed by India with 8.8 and Brazil with 5.8.

France health chief Jerome Salomon says with 33,500 COVID-19 patients in the hospital, the situation is far from good. However, he suggested the “collective efforts are starting to bear fruit” since the nation returned to a lockdown until at least Dec. 1.

Hospitals are so stretched that 150 patients have been transferred since Oct. 23 to hospitals around France. The nation added 437 more deaths, increasing the total to 46,273.

COLUMBUS, Ohio — Ohio Gov. Mike DeWine announced a three-week retail business curfew from 10 p.m. to 5 a.m. to slow the spread of the coronavirus.

DeWine says the measure, effective Thursday, is needed to reduce cases and stop the state’s hospitals from being overrun. He says the retail business curfew, paired with increased mask-wearing, could help cut contacts between people by 20% to 25%.

The Republican governor also asked Ohioans to reduce their daily contact with others.

Ohio hospital and intensive care admissions for the coronavirus are at record highs, with more than 3,600 people hospitalized Tuesday.

The seven-day rolling average of daily new cases has risen from 3,097 cases per day on Nov. 2 to 7,199 cases on Monday, according to an Associated Press analysis of data provided by The COVID Tracking Project.

OKLAHOMA CITY — The number of people hospitalized with the coronavirus in Oklahoma surged to a new high of 1,381 on Tuesday.

The rolling averages of both the positivity rate and number of new cases has more than doubled during the past seven days, according to data from Johns Hopkins University. The daily positivity rate increased from 9.1% to 18.2% and new daily cases rose from 1,113 to 2,628.

The health department reported 2,729 confirmed cases Tuesday and 10 more deaths. That brings the Oklahoma totals to 156,857 cases and 1,538 confirmed deaths since March.

They say in a letter sent to the White House that the Biden team needs information on medication and testing supplies, personal protective equipment, ventilators, hospital bed capacity and workforce availability.

“All information about the capacity of the Strategic National Stockpile, the assets from Operation Warp Speed, and plans for dissemination of therapeutics and vaccines needs to be shared as quickly as possible … so that there is no lapse in our ability to care for patients,” the letter said.

It was signed by Richard Pollack, president of the American Hospital Association; Dr. James Madara, the AMA’s CEO; and Debbie Dawson Hatmaker, acting CEO of the nurses association.

There were 32,191 confirmed coronavirus cases on Tuesday, increasing the total infections to 1.2 million. About 15% of people tested in the last 24 hours were positive for the virus, down from about 17% in recent days. That might indicate the recent partial lockdown imposed by the government in much of the country is reining in surging infections.

The number of COVID-19 patients in ICU beds increased by 120 on Tuesday, for a total of 3,612 nationwide.

Italy’s death toll stands at more than 46,000, the second highest in Europe after Britain.