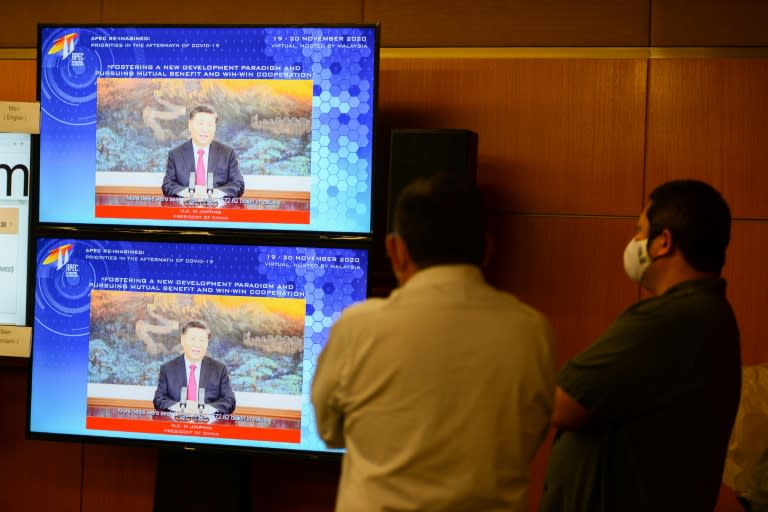 US President Donald Trump took part Friday in an Asia-Pacific summit as he pushes on with challenges to his election loss, a day after Xi Jinping used the forum to hail China’s growing economic clout.

The Asia-Pacific Economic Cooperation (APEC) gathering, held online this year because of the Covid-19 pandemic, brings together 21 Pacific Rim countries, accounting for about 60 percent of global GDP.

Beijing has become the main driving force behind the trade grouping after the United States began withdrawing from multilateral bodies during Trump’s presidency.

Xi, boosted by the signing last week of the world’s biggest trade pact, gave a keynote address to the forum Thursday, hailing China as a pivot point for global commerce and vowing to keep its “super-sized” economy open.

Trump joined the official summit Friday evening, appearing alongside other leaders via video link as the premier of Malaysia, this year’s APEC host, delivered opening remarks.

All the leaders had an official APEC backdrop on their screens featuring the enormous, green-domed Malaysian prime minister’s office — except for Trump, who appeared with a beige background.

A source involved in arranging the summit said the US president refused to use the official backdrop. He is set to deliver a speech to fellow leaders but it will not be open to the media.

It will be only the second time that Trump, who is pursuing legal challenges after his election loss to Democrat Joe Biden, has participated in APEC, the other occasion being in 2017.

Oh Ei Sun, an analyst from the Singapore Institute of International Affairs, said Trump would be aiming to “present himself as ‘presidential’ on the global stage”.

The president would also “like to reiterate his administration’s hallmark emphasis on protectionism and in the process forestall China from claiming leadership in the global free-trade agenda”, he told AFP.

Trump has repeatedly claimed without evidence that the voting and counts in the November 3 election were fraudulent, with his campaign launching various lawsuits.

He has taken a hard line on China during his tenure, hitting the world’s number-two economy with a barrage of tariffs and tech restrictions, and a Biden administration is expected to see a more nuanced extension of Washington’s current China policy.

The deal, which excludes the US, is viewed as a major coup for China and further evidence that Beijing is setting the agenda for global commerce as Washington retreats.

Signatories hope the pact will help their virus-hit economies on the road to recovery, and many leaders at the APEC forum warned against turning inwards in response to the pandemic.

“We need to trade and invest our way out of the current economic downturn,” Malaysian Prime Minister Muhyiddin Yassin said in his opening remarks at Friday’s summit.

“We must come together and work constructively towards navigating the region along a path of robust, inclusive and sustainable economic recovery and growth.”

APEC gatherings have in recent years been overshadowed by trade tensions between the US and China — leaders could not agree on a joint declaration at their previous summit in 2018 — but there are hopes for a more constructive American approach under Biden.