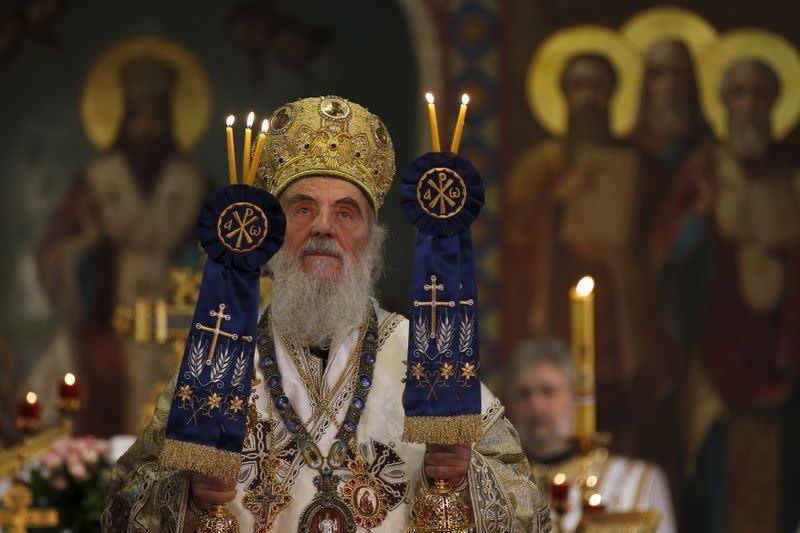 Church bells tolled in Belgrade and many people flocked to the capital’s main St Sava cathedral to mark his death at the age of 90, a decade after becoming Patriarch.

A conservative who wielded considerable political influence, Irinej was diagnosed with the novel coronavirus on Nov. 4 and had been in a military hospital in Belgrade since then.

He is the highest-ranking figure in the Eastern Orthodox Church to have died from the coronavirus infection.

He tested positive after attending the Nov. 1 funeral of Metropolitan Amfilohije, the Serbian Orthodox Church’s senior cleric in Montenegro, who also died from COVID-19.

“I was honoured to know you. People like you never depart,” President Vucic wrote on his Instagram account under a black and white photo of Irinej.

In a statement, the Serbian Orthodox Church said the Patriarch “rested with the Lord” and that the public would be informed about the details of the funeral in due course.

The Serbian government has declared three days of national mourning, set to last until Sunday.

“This is hugely painful and sad for all of us,” said Andreja Mladenovic, 45, from Belgrade, after lighting a candle in front of a cathedral next to the Patriarchate building in the Serbian capital.

“I am in tears, I also wept after I heard the news. May God receive him (Irinej),” said Sofija, 60, a housewife from Belgrade.

The Serbian Orthodox Church has around 12 million followers, mainly in Serbia, Montenegro and Bosnia, and dioceses in the United States, Australia and Western Europe.

This year and last, the Serbian Orthodox Church played a pivotal role in protests over a law on religion in Montenegro which allowed the state to seize some religious property. After the protests, the opposition won a parliamentary election.

Irinej backed Serbia’s attempts to join the European Union “if the EU respects Serbian identity, culture and religion.” He opposed abortion and gay rights as a “deviation of human nature”.

The election of the new Patriarch among bishops will take place in the coming months.