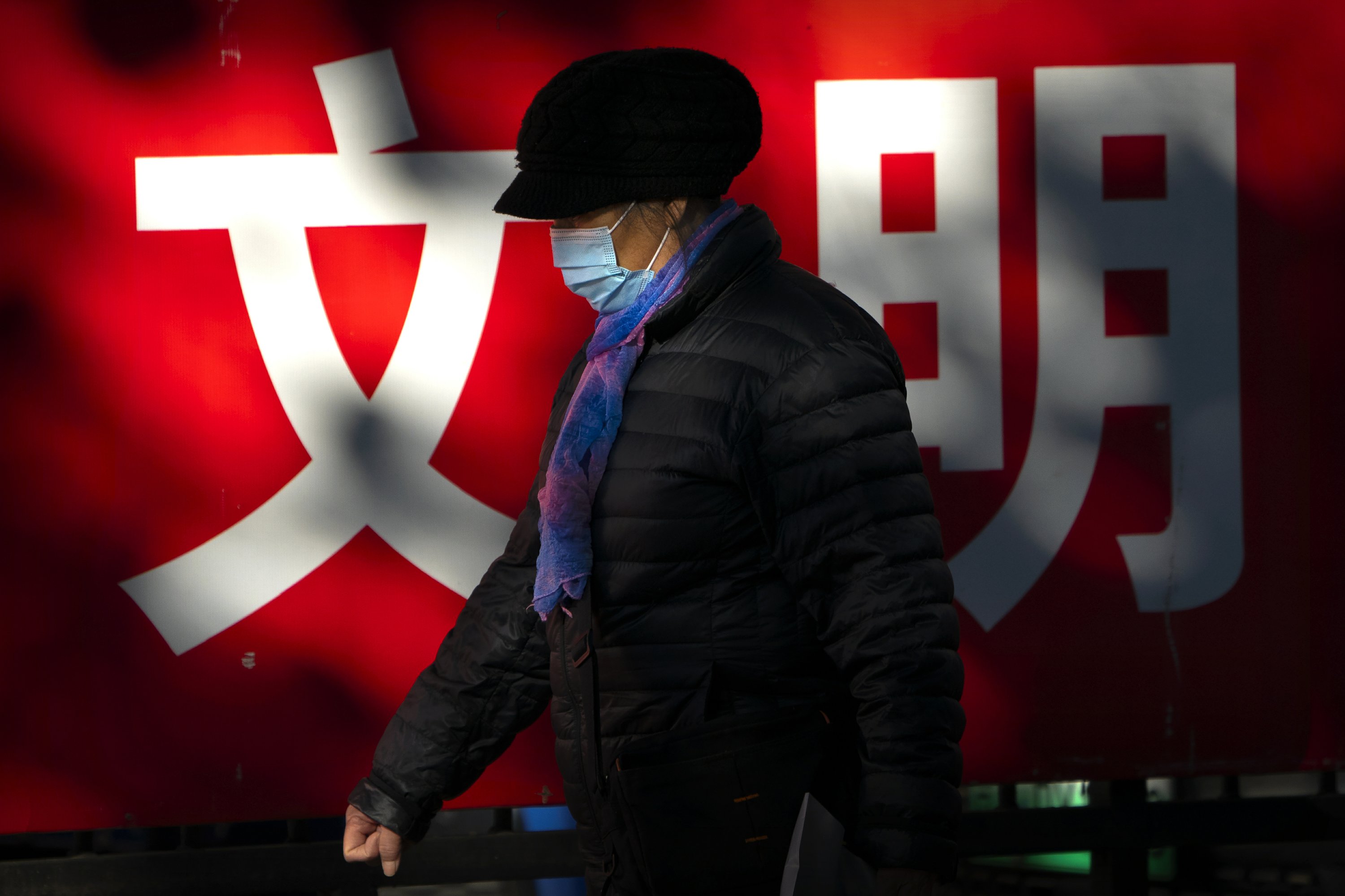 BEIJING — China is starting mass testing on 3 million people in a section in the northern city of Tianjin and has tested 4,015 people in a hospital in Shanghai after the discovery of a few cases Friday.

The National Health Commission recorded seven new domestically transmitted cases of COVID-19 Saturday, with five in Tianjin and two cases in the city of Shanghai.

Tianjin on Friday reported a case of community transmission involving four different individuals. In response, local authorities sealed off the residential community where the individuals lived as well as a hospital and a kindergarten. Today, authorities are starting testing of all residents in Binhai district in Tianjin city, according to the local government’s social media page.

In Shanghai, authorities have sealed off a hospital, after a husband and wife in Shanghai’s Pudong New district tested positive for COVID-19 Friday night after visiting the hospital for a diagnosis.

— Pfizer asks U.S. regulators for emergency use of vaccine candidate

— What does emergency use for a potential COVID-19 vaccine mean?

SEOUL, South Korea — South Korea has reported 386 new cases of the coronavirus, its fourth straight day of over 300, a viral resurgence that could force authorities to reimpose stronger social distancing restrictions after easing them in October to spur a faltering economy.

The figures released by the Korea Disease Control and Prevention Agency on Saturday brought the national caseload to 30,403, including 503 deaths.

More than 270 of the new cases came from the densely populated Seoul metropolitan area, where health workers have struggled to track transmissions tied to various places and groups, including schools, private tutoring academies, and religious facilities.

Officials eased social distancing measures to the lowest level in October, which allowed high-risk venues such as nightclubs and karaoke bars to reopen and fans to return to professional sports.

But the Korean Society of Infectious Diseases said in a statement on Friday that the country could be reporting more than 1,000 new infections a day in a week or two if the government fails to effectively strengthen its social distancing measures.

Inslee said that businesses would be able to apply for the assistance to help blunt the impact of restrictions that took effect this week, including the closure of fitness facilities and gyms, bowling centers and movie theaters, and the requirement that restaurants and bars to be limited to to-go service and outdoor dining. The economic package also includes $20 million in rental assistance and $15 million in utility payment assistance for those with low income. All of the funding is part of federal coronavirus outbreak assistance funds distributed to states.

CASPER, Wyo. — Wyoming Gov. Mark Gordon has announced new limits on indoor and outdoor public gatherings. But he has not implemented a statewide mask mandate as coronavirus cases continue to surge across the state.

The new order goes into effect Nov. 24. No statewide mask mandate was approved, though nearly all of the county health officers have called for one as virus cases, hospitalizations and deaths have substantially increased in recent weeks.

The Texas Hospital Association is now appealing for families to keep holiday gatherings “very small” as doctors and nurses struggle to keep up with rising caseloads. The group says staff are “tired and emotionally drained” and worried about the health of their own families.

The New York Post reported Friday that the New York Republican was being treated at a Long Island hospital.

“I’m weak but I feel good,” the 83-year-old told the newspaper in a phone interview. He said he had a light fever and congestion.

D’Amato said he started feeling unwell late last week, and didn’t know where he had gotten exposed to the virus. He said he had been mainly working from home, where he lives alone.

“Remember, your decisions are going to be what determines how many people live or die. Do your part,” Gov. Andy Beshear said, urging Kentuckians to follow the new requirements.

Starting Friday, private indoor gatherings are limited to two households, with a maximum of eight people. For roughly three weeks, bars and restaurants must close indoor dining, though they are permitted to continue curbside pickup, delivery and outdoor dining services.

Event venue capacity is limited to 25 people. Gym capacity is lowered to 33%, and group classes, team practices and competitions are prohibited. Beshear has also encouraged houses of worship to refrain from in-person services.

DETROIT — A judge on Friday declined to halt a three-week ban on indoor dining in Michigan that is one of the most recent coronavirus restrictions imposed by Gov. Gretchen Whitmer’s administration.

The state health department, meanwhile, reported a new daily high of confirmed COVID-19 cases, 9,779, and 53 additional deaths as the virus continued to spike.

In his ruling, U.S. District Judge Paul Maloney in Kalamazoo said a restraining order halting the indoor dining ban wouldn’t be appropriate, especially when the state hasn’t had a chance to respond to the lawsuit.

The Michigan Restaurant & Lodging Association, which has thousands of members, is suing to try to stop the indoor dining ban that began Wednesday. The group said restaurants can take further steps to reduce coronavirus risk without cutting off customers.

The group said its members were being unfairly treated compared to other businesses. The judge, however, wasn’t swayed.

Maloney scheduled the next hearing for Nov. 30, nearly two weeks into the three-week ban.

TOPEKA, Kan. — Kansas is including movie theaters among the businesses to receive aid as the state gets close to wrapping up its distribution of federal coronavirus relief funds.

Legislative leaders signed off Friday on a proposal from Gov. Laura Kelly’s pandemic recovery office to allocate $38.5 million in federal relief funds. The state received $1.25 billion and must spend the dollars by the end of the year.

The proposal called for distributing $20 million for aid to businesses that have struggled because of restrictions imposed during the coronavirus pandemic and $18.5 million on public health.

The funds for businesses include $5 million specifically for movie theaters, to be distributed $10,000 per screen. House Appropriations Committee Chairman Troy Waymaster, a Bunker Hill Republican, received assurances during the meeting of legislative leaders with Kelly that one- or two-screen theaters in small towns will be eligible.

SKOPJE, North Macedonia — North Macedonia has declared its first-ever nationwide state of emergency, allowing authorities to more easily use the armed forces as well as private resources to fight the pandemic.

The 30-day order, the first of its kind since the Balkan nation became independent in 1991, will take effect Saturday and was imposed after COVID-19 treatment capacity reached its limit.

The army will be used to help civilian authorities transport patients and build field hospitals.

Government-imposed restrictions have so far failed to curb a rise in infection rates. A total of 1,462 people have died in the landlocked country of around 2 million people from the pandemic — with 39 deaths recorded in the last 24 hours and an estimated 20,000 cases still active.

TORONTO — Canada’s largest city is going back on lockdown.

The province of Ontario announced Friday Toronto and the surrounding Peel Region will go into lockdown on Monday.

Premier Doug Ford and health officials say they won’t allow indoor organized events or social gatherings except for members of the same household. Restaurants and bars will only be allowed to offer takeout and delivery. Retail will only be open for curbside pickup or delivery except for big box stores.

The stricter measures come as Ontario reports 1,418 new cases of COVID-19 Friday, including 393 in Toronto and 400 new cases in Peel Region.

Dr. Mandy Cohen, secretary of the state Department of Health and Human Services, said on Friday that North Carolina will soon ramp up efforts to get more residents to download a contact tracing mobile application ahead of the Thanksgiving holiday.

Cohen noted a couple of smaller hospitals in the state have “seen stretch in their capacity” but are staying afloat as other hospitals with more beds reduce strain.

They accused the governor of failing to provide leadership in the state’s battle against a new surge of the coronavirus.

Ducey Chief of Staff Daniel Scarpinato pushed back on the request, noting that the mayors were doing little to enforce their own mask ordinances or ensure that existing safety measures put in place by the governor are being enforced.

Ducey said at a news conference Wednesday that he would not impose a statewide order because 90% of the population is already under county and city mandates that he allowed them to implement in June.

The state Department of Health Services reported 4,471 new confirmed cases and 43 additional deaths. That increased the state’s totals to 291,696 cases and 6,427 deaths.

PORTLAND, Ore. — Oregon has reported a record number of coronavirus cases Friday, with hospitalizations at their highest since the pandemic began.

Officials say the state hit a daily record of 1,306 COVID-19 cases, and 414 people are hospitalized.

Nearly three dozen current and incoming Oregon lawmakers have sent a letter to Democratic Gov. Kate Brown demanding an immediate increase in COVID-19 testing statewide as case numbers spike. The letter sent earlier this week emphasizes that California and Washington outrank Oregon in testing but Oregon’s test positivity rate — the percentage of tests that are positive — is much higher.

Brown has not responded to the bipartisan letter.

BATON ROUGE, La. — Louisiana will run out of federal coronavirus money before it pays out grants to all eligible small businesses and local government agencies seeking dollars from COVID-19 aid programs.

The Edwards administration says it has $431 million in outstanding, eligible reimbursement applications from local governments that it can’t pay. The treasurer’s office says it has thousands of business applications it can’t fulfill in that grant program.

NEW YORK — The coronavirus surge is taking an increasingly dire toll across the United States a week before the Thanksgiving holiday.

The U.S. is now averaging more than 1,300 COVID-19 deaths per day — the highest since the calamitous spring in New York City.

On Thursday, the nation hit a record of nearly 188,000 coronavirus cases. The number of people in the hospital with coronavirus reached an all-time high at more than 80,000.

Health experts are concerned Thanksgiving travel and holiday gatherings will fuel the spread of the virus. Many states and cities are imposing near-lockdowns or other restrictions. California ordered a 10 p.m. to 5 a.m. curfew, covering 94% of the state’s 40 million residents. New York City closed its schools on Thursday.

Total confirmed infections in the U.S. have eclipsed 11.7 million. There have been more than 252,000 confirmed deaths. Both categories lead the world.

LONDON — The British government says it has asked the country’s medicines regulator to begin assessing a vaccine for COVID-19.

Health Secretary Matt Hancock says the Medicines and Healthcare Products Regulatory Agency had begun receiving data from Pfizer and its German partner BioNTech about their vaccine, one of several in development.

Hancock says if approved, vaccination of the U.K. population could begin in December “with the bulk of the rollout in the new year.”

He says vaccination will be done in stages, starting with the elderly and most vulnerable. The vaccine will be delivered by doctors and pharmacists, in hospitals and at specially built vaccination centers.

Hancock says vaccinating the entire population would be a “massive logistical challenge” but the National Health Service was up to the task.

BISMARCK, N.D. — North Dakota has surpassed 70,000 confirmed coronavirus cases since the start of the pandemic.

The Department of Health reported 1,408 news cases Friday and 23 more deaths. The latest deaths bring the total to 818, in age ranges from 50s to 100s.

The department reported 13 new coronavirus hospitalizations Friday for a total of 289.

There were seven ICU beds and 187 inpatient beds available in North Dakota, according to state data.