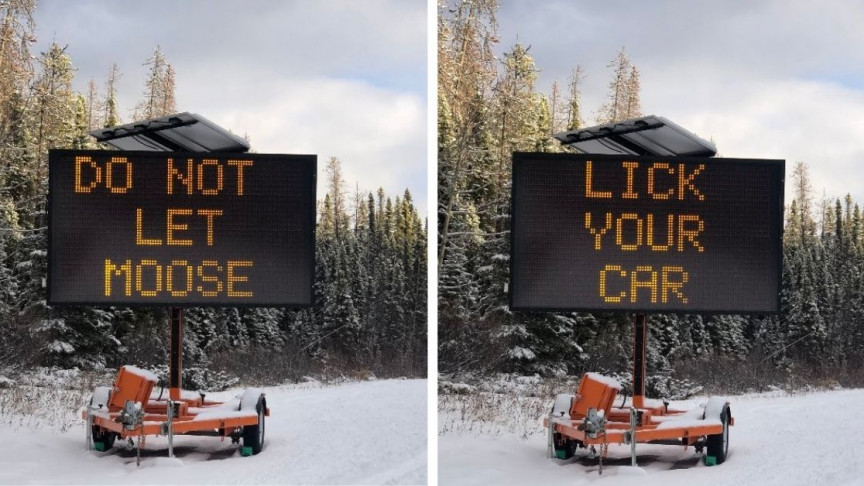 We all have habits, be it strange, be it funny, but we bet none of us is used to licking cars to taste some salt. Instead, soda crackers might work as the best choice, we assume.

The moose in Canada do not seem to agree with us. They fancy licking the salt off of the random cars that they can get their tongues on. And apparently, someone has had to warn people to watch out for the weird phenomenon.

The traffic signs were spotted on the Maligne Lake Road in Jasper, Alberta, and shared on Twitter on November 14, this year. And a follower confirmed the scene in action, capturing a moose licking a car in front of his.

This guy. We saw him both on our way to and from Maligne Lake. pic.twitter.com/16EGwWpEV7

It might look funny, which we agree to have laughed at the first sight, but it is not a habit to be assented by the Canadian authorities.

“(This) started as an occasional issue a few years ago and now is too common,” Jasper National Park spokesman Steve Young told Fitzhugh.

“People are getting far too close, and it’s perpetuated by their (the moose’s) obsession with salt, accessing the vehicles,” he added.

It is not the first time Canadians had witnessed such a random sign on the road. In 2016, Alberta Parks issued another warning and suggested some ways to avoid the incidents. Honking is one of them, also trying to push the moose away from the vehicle was considered dangerous.

So what’s the deal with the moose admiring salt this much? The answer lies behind the cars riding on salty roads in winter to avoid sliding off. Cutting to the chase, they know where to find their pleasure.