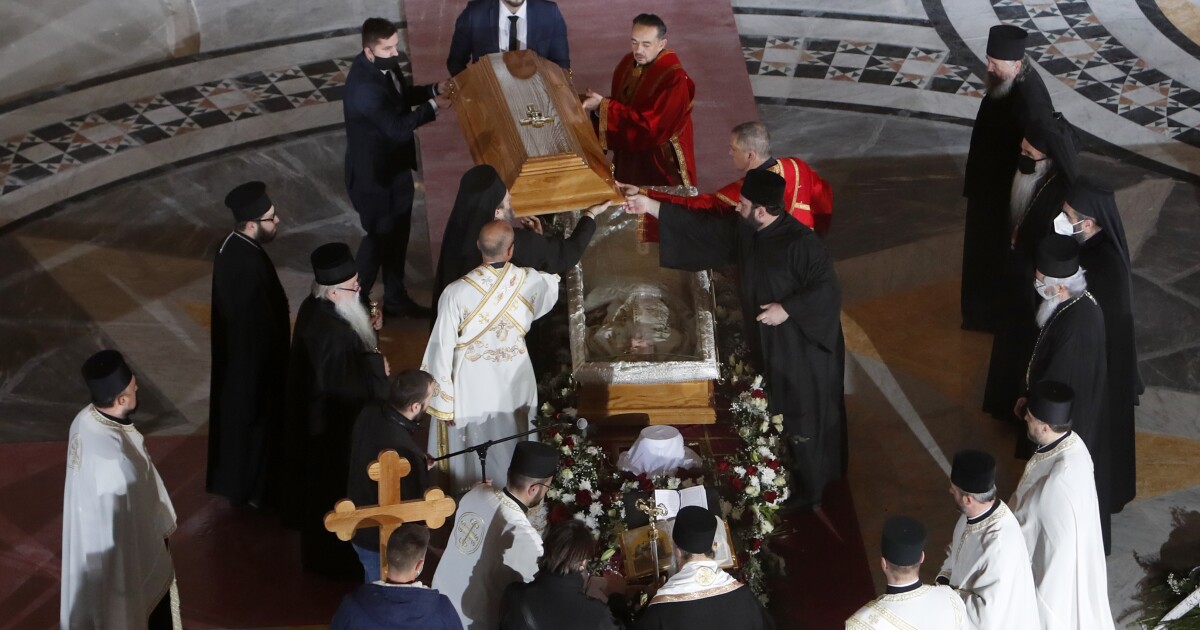 A COVID-19 outbreak among senior Orthodox Church leaders in the Balkans is fueling worry among health experts and even devout believers who embraced the clerics’ message that their faith would protect them from the coronavirus.

The Serbian Orthodox Church’s two most senior figures, including Patriarch Irinej, died within a month after testing positive for COVID-19. Another senior cleric, Bishop David, who took part in the prayers at Irinej’s funeral Sunday, at which most coronavirus precautions were ignored, has now tested positive as well, Serbian state TV said Monday.

The infections have raised concerns that the Orthodox Church — the largest religious grouping in the Balkans — is helping to spread the virus with its doctrine that true believers can’t get infected during communion and other church services.

Both Irinej and Bishop Amfilohije, who also died of COVID-19, had downplayed the dangers of the pandemic and avoided wearing masks in public. Amfilohije described large religious gatherings as “God’s vaccine.”

Irinej, 90, died Friday, three weeks after attending Amfilohije’s funeral in neighboring Montenegro, during which mourners kissed his remains in an open casket.

On Sunday, thousands of people attended Irinej’s funeral in the massive St. Sava Temple in the Serbian capital, Belgrade. Many mourners and most of the priests did not wear masks or adhere to social distancing inside the church, kissing the glass shield covering Irinej’s remains and even using a single spoon during communion.

Serbian epidemiologists said there was no way they could ban the traditional funeral prayers.

“A ban of more than five people is in place, but we could not and did not ban the funeral of the patriarch,” said Predrag Kon, who is a member of the government-appointed team dealing with the coronavirus. “It is clear there will be new infections. We will know this in a week.”

The 82-year-old head of the Church of Greece, Archbishop Ieronymos, was hospitalized last week, with doctors saying Monday he was in stable condition for the fifth day.

The death of a bishop in northern Greece earlier this month revived controversy surrounding communion, which in the Orthodox Church is given using one spoon shared among the entire congregation.

In Greece, the powerful Orthodox Church has insisted that the practice couldn’t transmit the disease as it is the body and blood of Christ.

Metropolitan Bishop Ioannis of Lagadas, 62, was an outspoken advocate of continuing communion during the pandemic. He was buried last Monday after dying of COVID-19. His region near the northern city of Thessaloniki is among the worst hit by the current surge of coronavirus cases in Greece.

With pallbearers dressed in full-body protective gear standing nearby, some of those who attended his funeral lowered their masks to kiss the coffin — a traditional gesture at funerals in Greece.

The church’s governing body, the Holy Synod, hit out at critics who had warned that communion could spread the coronavirus.

“Certain aspiring leaders of public opinion are insisting in a neurotic manner on concentrating exclusively on Holy Communion,” the Synod said in a statement. “They cite unscientific correlations with the spread of the coronavirus, in defiance of epidemiological evidence.”

In the spring, the Greek government ordered all places of worship, including churches, to shut down during the country’s first lockdown after the synod declined to order a shutdown itself. At the time, the church said that suggestions of coronavirus transmission through communion were blasphemy.

Greece is currently in a second lockdown as cases spiral, and churches have once again been shut down to the faithful, with services allowed only online.

But some continue to defy the ban. On Sunday, police interrupted a service in a northern Greek village, fining the priest 1,500 euros ($1,780) for allowing two people to attend.

The priest had urged parishioners to defy the ban, saying, “You’re either with Christ or the coronavirus.”