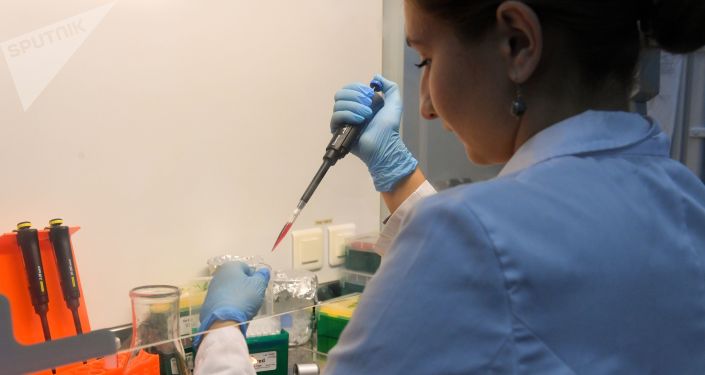 The N.F. Gamaleya National Research Centre for Epidemiology and Microbiology and the Russian Direct Investment Fund have announced the efficacy of their newly developed inoculation, the world’s first registered COVID-19 vaccine, has topped 95%, with the latter uplifting results shown 42 days after the first shot.

The evaluation was carried out among 18,794 volunteers 28 days after receiving the first dose (7 days after the second dose) of the vaccine or placebo, upon reaching the second checkpoint in line with clinical trial protocols. The analysis of this phase demonstrated a 91.4% efficacy rate for the Sputnik V vaccine.

Further on, preliminary data on the 42nd day after the first dose, or 21 days after the second dose, when the volunteers had already formed a stable immune response, the efficacy rate of the vaccine reached over 95%.

© Sputnik / Vladimir Pesnya
A researcher works inside a laboratory of the Gamaleya Scientific Research Institute of Epidemiology and Microbiology where the world’s first coronavirus vaccine registered in Russia was developed, in Moscow, Russia. On August 11, Russia announced registering the world’s first coronavirus vaccine, dubbed Sputnik V, set to be produced industrially.

The Russian vaccine has proven to be unique since it uses two different vectors based on the human adenovirus, which allows for a stronger and longer-term immune response as compared with vaccines based on one and the same vector for both doses.

“The data demonstrating [the] high efficacy of the Sputnik V vaccine give us hope that we will soon obtain the most important tool in the fight against the pandemic of the novel coronavirus infection”, noted Russian Health Minister Mikhail Murashko.

As per Gamaleya Centre Director Alexander Gintsburg: “it is very important that the second interim efficacy analysis of Sputnik V has confirmed our findings from the first stage and shown its efficacy at 91-92%”. He went on to stress the researchers’ most optimistic outlook, since they “expect the efficacy rate to be even higher based on the data three weeks after the second immunisation, when the body’s strongest and most stable response is achieved”.

Kirill Dmitriev, the CEO of the Russian Direct Investment Fund, has likewise praised the Russian scientific community’s achievement, saying Sputnik V is one of the most effective vaccines against coronavirus in the world, given its currently observed efficacy rate, while its price is two times lower than that of other similarly effective vaccines.

Phase III clinical trials are approved and ongoing in Belarus, the UAE, Venezuela, and other countries, as well as Phase II-III in India. Separately, the Sputnik V COVID-19 vaccine, which Russia’s health authorities historically registered on 11 August, is expected to undergo phase III trials in Mexico where it is to involve about 500 people as soon as the Russian developers get approval from the Mexican regulatory authorities.