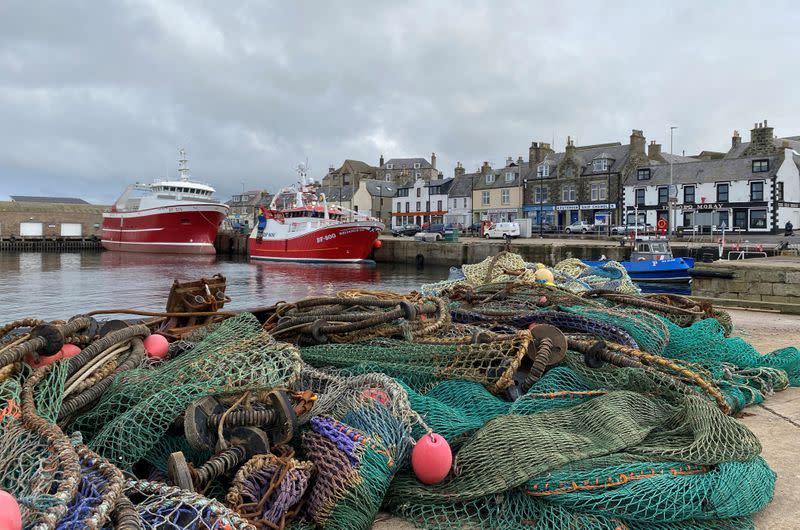 LONDON (Reuters) – Many Scottish fishermen have halted exports to European Union markets after post-Brexit bureaucracy shattered the system that used to put fresh langoustines and scallops in French shops just over a day after they were harvested.

Fishing exporters told Reuters their businesses could become unviable after the introduction of health certificates, customs declarations and other paperwork added days to their delivery times and hundreds of pounds to the cost of each load.

Business owners said they had tried to send small deliveries to France and Spain to test the new systems this week but it was taking five hours to secure a health certificate in Scotland, a document which is required to apply for other customs paperwork.

In the first working week after Brexit, one-day deliveries were taking three or more days – if they got through at all.

Owners could not say for sure where their valuable cargo was. A trade group told boats to stop fishing exported stocks.

“Our customers are pulling out,” Santiago Buesa of SB Fish told Reuters. “We are fresh product and the customers expect to have it fresh, so they’re not buying. It’s a catastrophe.”

On Thursday evening, the Scottish fishing industry’s biggest logistics provider DFDS Scotland told customers it had taken the “extraordinary step” of halting until Monday export groupage, when multiple product lines are carried, to try to fix IT issues, paperwork errors and the backlog.

Scotland harvests vast quantities of langoustines, scallops, oysters, lobsters and mussels from sea fisheries along its bracing Atlantic coast which are rushed by truck to grace the tables of European diners in Paris, Brussels and Madrid.

But Britain’s departure from the EU’s orbit introduced reams of paperwork and costs that must be completed to move goods across the new customs border, the biggest change to its trade since the launch of the Single Market in 1993.

Those trading in food and livestock face the toughest requirements, hitting the express delivery of freshly caught fish that used to move overnight from Scotland, via England, into France, before going on to other European markets in days.

David Noble, whose Aegirfish buys from Scottish fleets to export to Europe, said he would have to pay between 500 to 600 pounds ($815) per day for paperwork, wiping out most profit.

His concern is that this marks more than just teething problems, and says he cannot pass on the higher costs of doing business. “I’m questioning whether to carry on,” he said.

“If our fish is too expensive our customers will buy elsewhere.”

In the single market, European food could be processed and packed in Britain then returned to the EU for sale. But Britain’s pursuit of a more distant relationship means its trade deal does not cover all interactions between the two sides.

Gaps have already appeared on French and Irish shop shelves.

Brexit has strained the ties that bind the United Kingdom together: while England and Wales voted to leave the EU in 2016, Scotland and Northern Ireland voted remain.

Scottish First Minister Nicola Sturgeon has used Brexit as part of her argument that Scotland should seek independence.

She said on Friday that exporters were paying a high price, “a particular worry for Scotland’s world class seafood sector”.

Fishermen across Britain have accused Prime Minister Boris Johnson of betrayal after he previously vowed to take back control of British waters. With little new control and little access to customer markets, many are in despair.

Fishing trade bodies said mistakes in filling out paperwork meant entire consignments were being checked. A French fishmongers’ union said numerous seafood trucks had been held up at the customs point in Boulogne for several hours, and even up to a day, due to faulty paperwork.

While that should improve with time, and IT issues should be resolved, Seafood Scotland warned they could see the “destruction of a centuries-old market” if it does not.

Fergus Ewing, Scottish secretary for the rural economy, said it was better for problems to be identified and resolved in Scotland than hundreds of miles away.

SB Fish’s Buesa, angered at suggestions that traders were not prepared, said all his paperwork was correct and demanded to know why business leaders were not making more of a fuss.

He owns the business with his father, has been exporting for 28 years and employs around 50 people. “I’m in the trenches here,” he said. “It’s gridlock.”