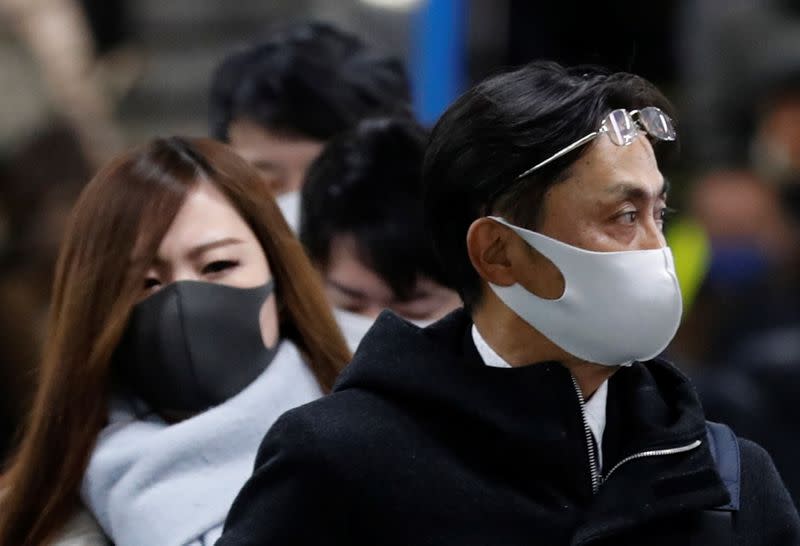 By Chang-Ran Kim and Kiyoshi Takenaka

TOKYO (Reuters) -Japan declared a limited state of emergency in the capital, Tokyo, and three neighbouring prefectures on Thursday to stem the spread of the coronavirus, resisting calls from some medics for wider curbs due to the economic damage they would cause.

The government said the one-month emergency would run from Friday to Feb. 7 in Tokyo and Saitama, Kanagawa and Chiba prefectures, covering about 30% of the country’s population. Restrictions would centre on combating transmission in bars and restaurants, which the government says are main risk areas.

The curbs are narrower in scope than those imposed in April under an emergency that ran to late May. At that time, the curbs were nationwide and schools and non-essential businesses were mostly shuttered. This time, schools are not being closed.

Prime Minister Yoshihide Suga’s government is seeking to limit damage to the world’s third-biggest economy while striving to defeat the virus once and for all as it looks ahead to staging the postponed summer Olympics.

“The global pandemic has been a tougher one than we expected, but I’m hopeful we can overcome this,” Suga told a televised news conference.

“For this to happen, I must ask citizens to endure life with some restrictions.”

Some medical experts have said they fear the government’s plan for limited restrictions might not be enough.

“We may need to think about a state of emergency nationwide,” Toshio Nakagawa, president of the Japan Medical Association, said on Wednesday.

Suga said damage to the economy was inevitable but he would aim to protect jobs and businesses with a 70 trillion yen ($670 billion) stimulus package, which is being rolled out.

Japan, though less seriously hit by the pandemic than many places, has been unable to rein in the virus to the extent some countries in the region have, with recorded daily infections at more than 7,000 for the first time on Thursday, media reported.

Tokyo in particular has been a constant worry with its tally of positive tests jumping to 2,447 on Thursday, from a record of 1,591 the previous day.

Authorities aim to start a vaccination campaign by the end of February.

The emergency measures include asking restaurants and bars to close by 8 p.m., and residents to refrain from non-urgent outings, more work from home and limiting crowds at sports and other big events to 5,000 people.

“I agree with it. Without an emergency declaration, people would not stop moving around. It may be extended beyond February 7,” 20-year-old office worker Kazuki Yamashige told Reuters.

Hiroaki Toyama, 60, who runs human resources business, said the declaration would “throw more eateries and bars out of business and drive up suicides. That would be serious problem.”

The Tokyo Metropolitan Government said earlier that exhibitions of the Olympics torch around the capital had been postponed.

The four prefectures are home to about 150,000 restaurants and bars. Suga has said limiting their hours had helped bring cases down in regions such as Osaka and Hokkaido.

But in a worrying sign, Osaka on Wednesday reported a record 560 new cases while Hokkaido saw cases exceed 100 for the first time in a week.

The prefectures of Osaka, Hyogo and Kyoto were considering requesting a state of emergency, media reported.

According to simulations by Kyoto University scientist Hiroshi Nishiura, infections in Tokyo could reach 3,500 a day by February and hit 7,000 by March without new measures.

Emergency measures could take at least two months to bring infections to manageable levels, he said.

In the meantime, eating and drinking establishments are suffering.

Tokyo-based Teikoku Databank said this week bankruptcies in the sector hit a high of 780 in 2020, up from the previous record of 732. Suga said the government would increase compensation for the restaurant business to 1.8 million yen ($17,400) a month from 1.2 million yen.

Analysts say the new state of emergency would probably trigger an economic contraction in the first quarter – a reversal from a 2.1% annualised expansion forecast in a Reuters poll last month.