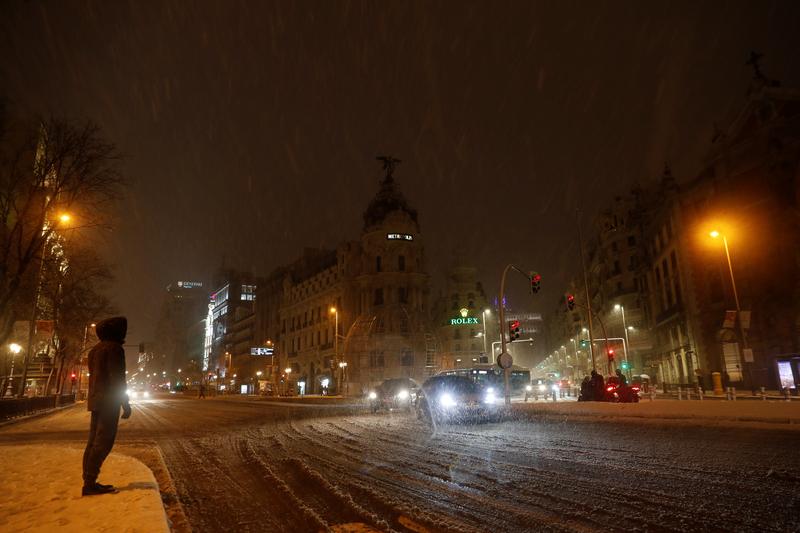 MADRID (Reuters) – Heavy snowfall from Storm Filomena left hundreds of drivers trapped in their cars on Friday as roads were blocked and Madrid airport was closed.

The M-30 and M-40 motorways near Madrid were among more than 400 roads were affected by the snow, traffic authorities said. Citizens were asked to avoid non-essential travel.

Some drivers were trapped in their vehicles in Madrid, unable to move due to icy roads.

“I drove to see my husband in hospital and have been stuck here for three hours. It’s a journey which should take 15 minutes,” a woman told Spanish television RNE from her car.

The Red Cross took food to trapped lorry drivers on the A4 in Madrid.

“Owing to the adverse meteorological conditions, flights are being diverted from Madrid Barajas airport. Consult your airline for the state of your flight,” Aena, which controls the country’s airports, said in a tweet.

Real Madrid football team, headed to Pamplona for a match against La Liga rivals Osasuna, were left waiting on a plane for more than two hours at Madrid airport.

With up to 20 cm (8 inches) of snow forecast in 24 hours and temperatures hovering around zero centigrade, the south of the Madrid region was on its highest level of alert for the first time since the system was created in 2007.

Large parks in the capital, including the Retiro next to the Prado museum, were closed as a precaution.

“I have come out to see and enjoy the snow. There is very little else to do these days (because of the pandemic),” said Juan Jose, 24, a marketing executive, outside Retiro Park.

High-speed rail services between Madrid and the southeastern cities of Alicante and Valencia were suspended.

Troops from the Unit for Military Emergencies were helping clear roads and infrastructure across the country, the defence ministry said.

“Perhaps we would have to go back to the snowfall of February 1984 or to that of March 1971 to find similar precedents if the forecasts we are expecting are correct,” said Ruben del Campo, an Aemet spokesman.