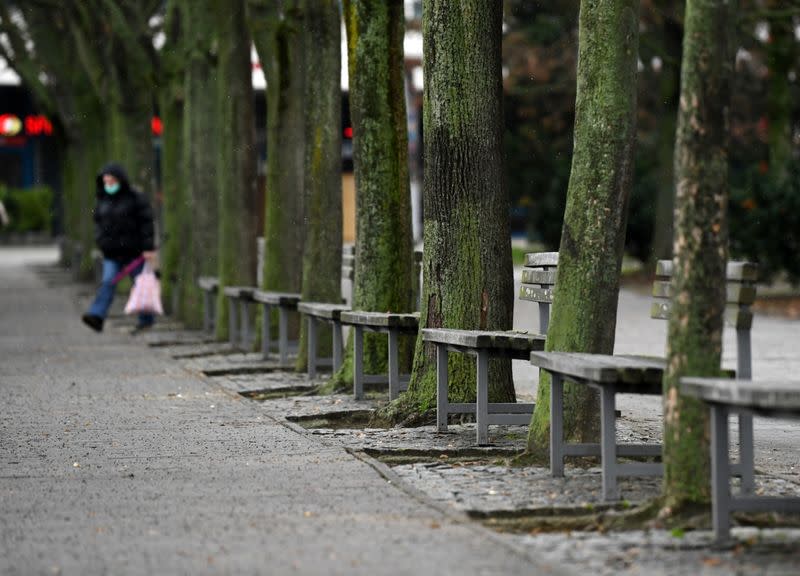 BERLIN (Reuters) – Germany reported a record 1,188 daily COVID-19 deaths on Friday, only days after further tightening a national lockdown amid fears that a more transmissible variant of the coronavirus may put additional strain on struggling hospitals.

Europe’s largest and most populous economy hopes to be able to limit the spread of the virus until enough of its population has been vaccinated against COVID-19 to achieve herd immunity.

On Tuesday, Chancellor Angela Merkel and state premiers agreed to restrict non-essential travel for residents of hard-hit areas all over Germany for the first time, after a lockdown decreed in December failed to significantly reduce infection numbers.

The death toll reported by the Robert Koch Institute (RKI) for infectious diseases on Friday surpassed a previous record of 1,129 registered on Dec. 30, taking the total in connection with the pandemic to 38,795.

RKI also confirmed another 31,849 new infections, one of the highest daily tallies so far.

“Every two minutes, someone dies of the coronavirus in Germany,” Bavarian premier Markus Soeder told the regional parliament, urging critics to take the threat seriously.

The premier of the eastern state of Thuringia, one of the hardest-hit areas in Germany, called on the government in Berlin to extend the shutdown to the whole economy, as in the first wave of the pandemic, to curb the surge in infections.

“I don’t see any other option,” Bodo Ramelow told broadcaster MDR, shortly after the neighbouring state of Saxony reported the first discovery of the more transmissible variant of the virus in a traveller returning from Great Britain.

In Berlin, one of the worst affected of Germany’s states, authorities postponed the reopening of schools after the Christmas break until Jan. 25. They had been due to restart on Monday.

Germany is also considering suspending flights from additional countries, including Ireland, over concerns about the new variant of the virus, broadcaster n-tv reported, citing government sources.