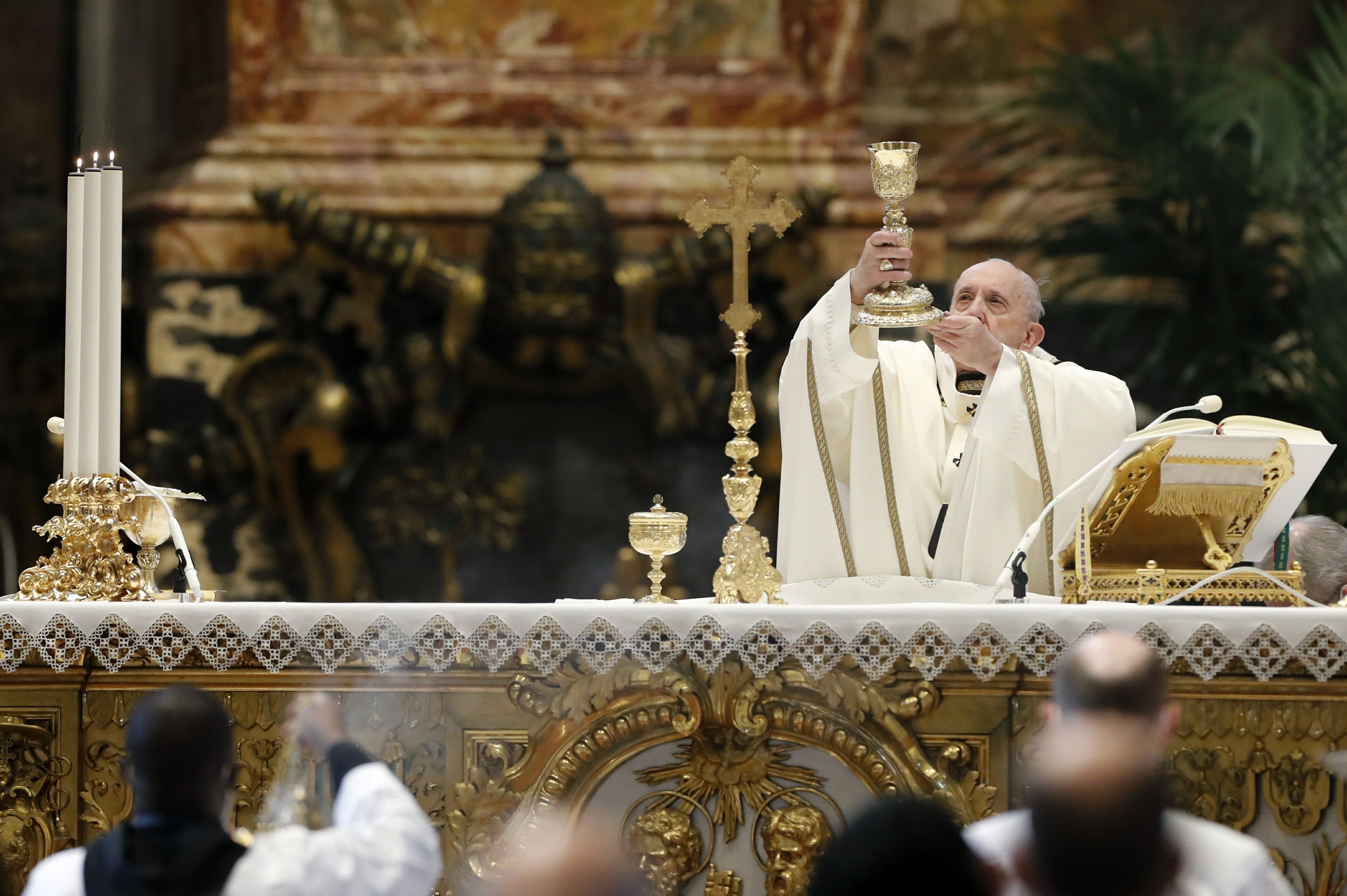 VATICAN CITY — Pope Francis has confirmed in an interview with an Italian broadcaster that he has an appointment to get the anti-COVID vaccine when the Vatican starts its vaccination program next week.

The pope also said everyone should get the vaccine, calling it an “ethical option, because you are playing with your health, life, but also with the lives of others.”

Excerpts from the sit-down interview were released by Mediaset on Saturday, a day before it is scheduled to be aired. It is the first confirmation that the 84-year-old pope who is missing part of one lung will get the vaccine, although the Vatican had already announced it would begin administering the vaccines later this month.

The Vatican has previously said that it’s “morally acceptable” for faithful to receive COVID-19 vaccines whose research used cell lines from tissue obtained from abortions. Vatican City has had at least 27 confirmed cases of COVID-19.

— The most populous U.S. state needs more medical workers at facilities swamped by coronavirus patients. But almost no help is coming from the California Health Corps, a program that recruited 95,000 volunteers and has just 14 now working in the field.

— The pandemic meets politics in Germany, where the start of 2021 heralds the end of the Angela Merkel era. With a federal election scheduled for September, frustration over the slow start of vaccinations has brought jockeying among potential successors to the chancellor.

AMMAN, Jordan — Jordan announced it is expecting the first doses of a coronavirus vaccine to arrive in the kingdom late Saturday.

Wael Hayajneh, the Health Ministry’s official in charge of COVID-19, said the vaccines are coming from state-owned Chinese drugmaker Sinopharm.

Another shipment of the Pfizer-BioNTech vaccine is expected to get to the Middle Eastern kingdom on Monday, Hayajneh said.

Jordan plans to start its vaccination drive on Wednesday. It has arranged to secure 200,000 doses in the first quarter of 2021 from Pfizer and Sinopharm and possibly other vaccine suppliers.

Jordan’s health minister has said the inoculations will first target 20% to 25% of the frontline workers and vulnerable groups.

Jordan, with a population of 10 million, has recorded over 4,000 deaths and 305,000 confirmed cases since the start of the pandemic.

ANCHORAGE, Alaska — Health officials in Anchorage said appointments for the city’s residents to receive their first dose of a COVID-19 vaccine filled up in a matter of hours this week, leading to frustration for people still trying to sign up for vaccination clinics planned for throughout the weekend and early next week.

Clinics are not accepting walk-ins.

Harris said Anchorage is expecting to receive about 14,600 vaccine doses this month.

Residents age 65 and older are eligible to get vaccinated and there are about 33,000 people in that category.

LONDON — Another 1,035 people in the U.K. have died within 28 days of testing positive for the coronavirus, bringing the country’s total death toll in the pandemic to over 80,000.

The British government reported Saturday that the number of confirmed deaths has reached 80,868, the most in Europe and the world’s fifth-highest pandemic death toll. The United States, Brazil, India and Mexico are in the top four.

Hospitals around the U.K. are under heavy pressure treating COVID-19 patients. London’s mayor declared the capital’s COVID-19 situation to be critical Friday, when the country’s daily reported deaths hit a record high of 1,325.

Official data also show that the total number of confirmed coronavirus cases in the U.K. has exceeded 3 million.

SACRAMENTO, Calif. — California desperately needs more medical workers at facilities swamped by coronavirus patients, but almost no help is coming from a volunteer program that Gov. Gavin Newsom created at the start of the pandemic.

An army of 95,000 initially raised their hands, and just 14 are now working in the field.

Newsom says the program “has been incredibly effective.” But very few volunteers actually met qualifications for the California Health Corps, and only a tiny sliver have the high-level experience needed to help with the most serious virus cases.

Other states have had similar difficulties making volunteer programs work.

A researcher says many eligible volunteers may have found other jobs before the latest coronavirus surge.

PHOENIX — Arizona, which is a COVID-19 hot spot in the United States, has now recorded more than 10,000 deaths and 600,000 confirmed cases since the pandemic began.

The daily numbers brought Arizona’s total confirmed cases to 607,345 and the state’s death toll in the pandemic to 10,036.

Arizona and Rhode Island are tied for the country’s highest COVID-19 diagnosis rate, with 1 in every 109 people diagnosed with the disease between Jan. 1 and Friday.

There were 4,920 COVID-19 patients occupying hospital beds on Friday.

NEW DELHI — The government of India is planning to kick off a vaccination drive on Jan. 16 to stem COVID-19 in the world’s second-most populous country.

The Health Ministry said Saturday that priority will be given to healthcare workers and others performing frontline duties during the pandemic, categories that together are estimated to include around 30 million people.

They will be followed by individuals over age 50 and younger people with underlying health conditions, numbering around 270 million, the ministry said in a statement.

The ministry said that both vaccines would be administered in two dosages.

With 10.4 million confirmed coronavirus cases, India has the second-highest total behind the United States. Indian has reported almost 150,800 virus-related deaths during the pandemic.

CALUMET, Michigan — A cafe in a small town in the U.S. state of Michigan has been found in contempt of court and fined $2,500 for continuing to serve customers indoors.

A judge held a hearing on Friday involving Cafe Rosetta, which serves soup, sandwiches and more in Calumet, a town of roughly 750 in Houghton County.

“When it comes to court orders, in my opinion, civil disobedience is not an option. It just absolutely is not,” Judge Wanda Stokes said.

The cafe’s food permit has been yanked. State regulators then got a Dec. 30 order from Stokes to shut down the business.

Since mid-November, Michigan restaurants and bars have been restricted to outdoor service or carry-out orders to reduce the spread of the coronavirus.

The tweet from the account of Khamenei, who has the final say on all state matters in Iran, claimed that COVID-19 vaccines imported from the U.S. or U.K. were “completely untrustworthy.”

“It’s not unlikely they would want to contaminate other nations,” the tweet said, in reference to America and Britain.

On Friday, Khamenei announced a ban on importing American and British vaccines. Iran’s Red Crescent said it will not import scores of thousands of American Pfizer-BioNTech vaccine that a group of U.S.-based benefactors planned to donate to Iran.

However, Khamenei has OK’d vaccine imports from other “safe” places abroad.

Iran in December began the human test phase of its homemade vaccine that it is expected to distribute in the spring.

Iran has struggled to stem the worst virus outbreak in the Middle East, which has infected over 1.2 million people and killed more than 56,000.

COLOMBO, Sri Lanka — Sri Lankan prison authorities have decided to free more than 100 prisoners who are serving jail terms because of their inability to pay fines, in an attempt to contain the spread of COVID-19 within crowded prisons.

By Saturday, 4,121 prisoners had tested positive, along with 129 officers, in five prisons in different parts of the country.

Sri Lankan prisons are highly overcrowded, with more than 26,000 inmates in facilities with the capacity for 10,000.

On Saturday, prison authorities said about 150 inmates who are serving jail terms because they could not pay the fines would be released under a special pardon announced by the government, in order to ease the congestion at the prisons.

Authorities have been releasing prisoners on various grounds since December.

Sri Lanka has seen a fresh outbreak of the disease since October when two clusters — one centered on a garment factory and other on a fish market — emerged in the capital, Colombo, and its suburbs. The prison cluster emerged later.

Confirmed cases from the three clusters grew to 43,525 on Saturday. Sri Lanka’s total number of positive cases since March is 47,304, with 225 fatalities.

TOKYO — Several regional governments in Japan have asked for a state of emergency declaration like the one issued by the prime minister to the Tokyo area to stem the surging rise in coronavirus cases.

The heads of Osaka, Kyoto and Hyogo prefectures in central Japan relayed their request to Yasutoshi Nishimura, the minister in charge of coronavirus measures, in an online conference call on Saturday, Osaka Gov. Hirofumi Yoshimura told reporters.

There was no immediate decision, but the government panel of medical experts will study the situation, Yoshimura said.

Japan’s state of emergency, which kicked in Friday for Tokyo and nearby Kanagawa, Saitama and Chiba, centers around asking restaurants and bars to close at 8 p.m. It lasts for a month but can be extended.

Gifu Prefecture announced its own monthlong state of emergency Saturday. Other prefectures may follow suit.

BEIJING — COVID vaccine shots will be free in China, where more than 9 million doses have been given to date, health officials in Beijing said Saturday.

“Ordinary people will not need to spend a penny,” Zheng Zhongwei, a National Health Commission official, said at a news conference.

The announcement cleared up confusion from a news conference nine days ago at which Zheng said it would be affordable, and a more senior official, Vice Minister Zeng Yixin, jumped in to say it would be free.

The costs will be covered by a national medical insurance fund and government funds. About 7.4 million shots have been given since a drive began Dec. 15 to inoculate medical and transport workers and other key groups ahead of Lunar New Year, a major holiday in mid-February. More than 1.6 million shots had been given in previous months.

Zeng, the vice minister, said the specific timing for a visit by a WHO expert team on the origins of the virus is being determined and that it would be joined by Chinese experts in Wuhan, the city where cases of the new coronavirus were first detected in late 2019.

WHO head Tedros Adhanom Ghebreyesus expressed disappointment earlier this week that the Chinese side had not finalized the needed permissions for the visit. Two team members who were already en route had to turn back. Tedros said in Geneva on Friday that he expects the dates to be set next week.

BEIJING — Chinese authorities are asking residents in two cities south of Beijing to stay home for seven days as they try to stamp out a coronavirus outbreak in which more than 300 people have tested positive in the past week.

According to official notices on social media, the cities of Shijiazhuang and Xingtai in Hebei province are restricting people to their communities and villages and have banned gatherings.

Hebei reported 14 newly confirmed cases in the latest 24-hour period, bringing the total in the outbreak to 137. It has found 197 other people without symptoms who also tested positive. China does not include asymptomatic cases in its confirmed count.

Beijing is requiring workers from Hebei to show proof of employment in Beijing and a negative virus test before entering the capital.

MEXICO CITY — Mexico has posted its third straight day of a new high for coronavirus infections, with 14,362 newly confirmed cases and a near-record of 1,038 more deaths.

The country has now topped 1.5 million total infections and over 132,000 deaths so far in the pandemic.

The country’s extremely low testing rate means that is an undercount, and official estimates suggest the real death toll is over 180,000.

Officials say 6,623 people were vaccinated against the coronavirus Friday, a rate similar to previous days.

Mexico has received only about 107,000 doses of the Pfizer vaccine, and has pinned much of its hopes on cheaper, easier-to-handle vaccines made by China’s CanSino, though that vaccine has not yet been approved for use.

Sorgente articolo:
The Latest: Pope says he has appointment for COVID-19 shot – The Associated Press