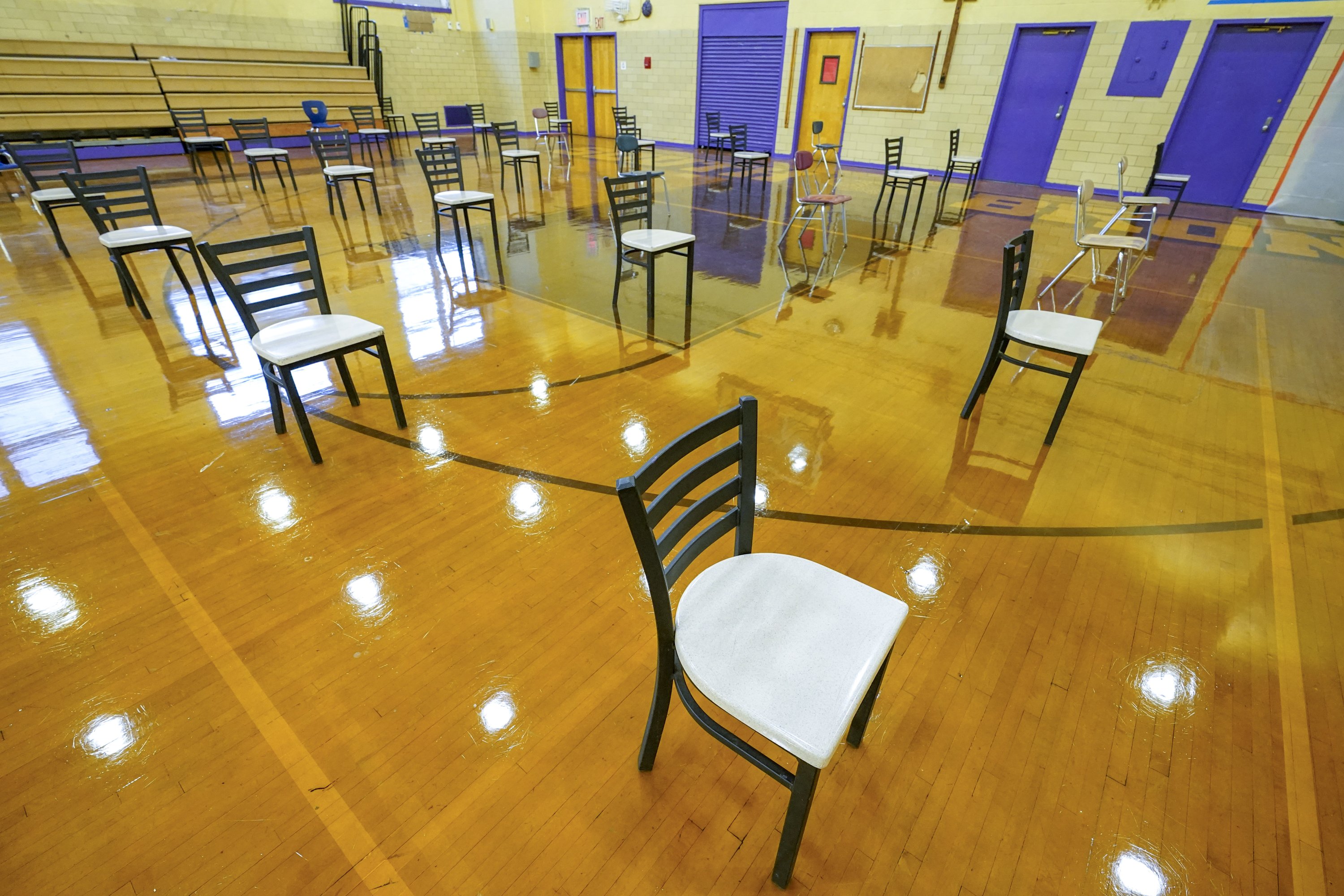 The state Department of Public Health said the number raises the state’s death toll since the start of the pandemic to 29,233.

A surge of cases following Halloween and Thanksgiving produced record hospitalizations in California, and now the most seriously ill of those patients are dying in unprecedented numbers.

Already, many hospitals in Los Angeles and other hard-hit areas are struggling to keep up and warned they may need to ration care as intensive care beds dwindle.

— The most populous U.S. state needs more medical workers at facilities swamped by coronavirus patients. But almost no help is coming from the California Health Corps, a program that recruited 95,000 volunteers and has just 14 now working in the field.

— The pandemic meets politics in Germany, where the start of 2021 heralds the end of the Angela Merkel era. With a federal election scheduled for September, frustration over the slow start of vaccinations has brought jockeying among potential successors to the chancellor.

OKLAHOMA CITY — An Oklahoma judge has extended a temporary restraining order allowing bars and restaurants across Oklahoma to stay open past an 11 p.m. curfew issued in November by Gov. Kevin Stitt in an effort to slow the spread of the coronavirus.

District Judge Susan Stallings heard arguments in the case Friday and extended the Dec. 29 order while she considers ruling in the lawsuit by bar owners who argue the governor doesn’t have legal authority to impose the curfew, according to court records.

Attorneys for the governor say state law gives Stitt “broad and flexible authority needed” to combat the spread of the virus.

On Saturday, Oklahoma has the sixth most new cases per capita in the nation with 1,218.16 per 100,000 residents, according to data from Johns Hopkins University. The state health department on Saturday reported 324,875 total cases and 2,738 deaths since the pandemic began.

JERUSALEM — Israeli Prime Minister Benjamin Netanyahu on Saturday received the second dose of the coronavirus vaccine after becoming the first Israeli to be inoculated last month.

Israel is in the midst of a third nationwide lockdown after seeing a surge in cases despite unleashing one of the world’s fastest vaccination campaigns. The country has given the first of two vaccine doses to nearly 20% of its population, and Netanyahu said Saturday that it has secured enough vaccines to inoculate the whole adult population by the end of March.

Netanyahu has placed the vaccination drive at the center of his campaign for reelection that month, when Israel will hold its fourth nationwide vote in less than two years. In the meantime, he has called on Israelis to make “one last big effort” to halt transmission by adhering to the tightened restrictions.

Most schools and businesses were closed starting Friday, with people required to remain within 1,000 meters (yards) from home except for essential needs. Public gatherings are heavily restricted and public transportation is limited. The restrictions are to last for at least two weeks.

VATICAN CITY — Pope Francis has confirmed in an interview with an Italian broadcaster that he has an appointment to get the anti-COVID vaccine when the Vatican starts its vaccination program next week.

The pope also said everyone should get the vaccine, calling it an “ethical option, because you are playing with your health, life, but also with the lives of others.”

Excerpts from the sit-down interview were released by Mediaset on Saturday, a day before it is scheduled to be aired. It is the first confirmation that the 84-year-old pope who is missing part of one lung will get the vaccine, although the Vatican had already announced it would begin administering the vaccines later this month.

The Vatican has previously said that it’s “morally acceptable” for faithful to receive COVID-19 vaccines whose research used cell lines from tissue obtained from abortions. Vatican City has had at least 27 confirmed cases of COVID-19.

AMMAN, Jordan — Jordan announced it is expecting the first doses of a coronavirus vaccine to arrive in the kingdom late Saturday.

Wael Hayajneh, the Health Ministry’s official in charge of COVID-19, said the vaccines are coming from state-owned Chinese drugmaker Sinopharm.

Another shipment of the Pfizer-BioNTech vaccine is expected to get to the Middle Eastern kingdom on Monday, Hayajneh said.

Jordan plans to start its vaccination drive on Wednesday. It has arranged to secure 200,000 doses in the first quarter of 2021 from Pfizer and Sinopharm and possibly other vaccine suppliers.

Jordan’s health minister has said the inoculations will first target 20% to 25% of the frontline workers and vulnerable groups.

Jordan, with a population of 10 million, has recorded over 4,000 deaths and 305,000 confirmed cases since the start of the pandemic.

ANCHORAGE, Alaska — Health officials in Anchorage said appointments for the city’s residents to receive their first dose of a COVID-19 vaccine filled up in a matter of hours this week, leading to frustration for people still trying to sign up for vaccination clinics planned for throughout the weekend and early next week.

Clinics are not accepting walk-ins.

Harris said Anchorage is expecting to receive about 14,600 vaccine doses this month.

Residents age 65 and older are eligible to get vaccinated and there are about 33,000 people in that category.

LONDON — Another 1,035 people in the U.K. have died within 28 days of testing positive for the coronavirus, bringing the country’s total death toll in the pandemic to over 80,000.

The British government reported Saturday that the number of confirmed deaths has reached 80,868, the most in Europe and the world’s fifth-highest pandemic death toll. The United States, Brazil, India and Mexico are in the top four.

Hospitals around the U.K. are under heavy pressure treating COVID-19 patients. London’s mayor declared the capital’s COVID-19 situation to be critical Friday, when the country’s daily reported deaths hit a record high of 1,325.

Official data also show that the total number of confirmed coronavirus cases in the U.K. has exceeded 3 million.

SACRAMENTO, Calif. — California desperately needs more medical workers at facilities swamped by coronavirus patients, but almost no help is coming from a volunteer program that Gov. Gavin Newsom created at the start of the pandemic.

An army of 95,000 initially raised their hands, and just 14 are now working in the field.

Newsom says the program “has been incredibly effective.” But very few volunteers actually met qualifications for the California Health Corps, and only a tiny sliver have the high-level experience needed to help with the most serious virus cases.

Other states have had similar difficulties making volunteer programs work.

A researcher says many eligible volunteers may have found other jobs before the latest coronavirus surge.

PHOENIX — Arizona, which is a COVID-19 hot spot in the United States, has now recorded more than 10,000 deaths and 600,000 confirmed cases since the pandemic began.

The daily numbers brought Arizona’s total confirmed cases to 607,345 and the state’s death toll in the pandemic to 10,036.

Arizona and Rhode Island are tied for the country’s highest COVID-19 diagnosis rate, with 1 in every 109 people diagnosed with the disease between Jan. 1 and Friday.

There were 4,920 COVID-19 patients occupying hospital beds on Friday.

NEW DELHI — The government of India is planning to kick off a vaccination drive on Jan. 16 to stem COVID-19 in the world’s second-most populous country.

The Health Ministry said Saturday that priority will be given to healthcare workers and others performing frontline duties during the pandemic, categories that together are estimated to include around 30 million people.

They will be followed by individuals over age 50 and younger people with underlying health conditions, numbering around 270 million, the ministry said in a statement.

The ministry said that both vaccines would be administered in two dosages.

With 10.4 million confirmed coronavirus cases, India has the second-highest total behind the United States. Indian has reported almost 150,800 virus-related deaths during the pandemic.

CALUMET, Michigan — A cafe in a small town in the U.S. state of Michigan has been found in contempt of court and fined $2,500 for continuing to serve customers indoors.

A judge held a hearing on Friday involving Cafe Rosetta, which serves soup, sandwiches and more in Calumet, a town of roughly 750 in Houghton County.

“When it comes to court orders, in my opinion, civil disobedience is not an option. It just absolutely is not,” Judge Wanda Stokes said.

The cafe’s food permit has been yanked. State regulators then got a Dec. 30 order from Stokes to shut down the business.

Since mid-November, Michigan restaurants and bars have been restricted to outdoor service or carry-out orders to reduce the spread of the coronavirus.

The tweet from the account of Khamenei, who has the final say on all state matters in Iran, claimed that COVID-19 vaccines imported from the U.S. or U.K. were “completely untrustworthy.”

“It’s not unlikely they would want to contaminate other nations,” the tweet said, in reference to America and Britain.

On Friday, Khamenei announced a ban on importing American and British vaccines. Iran’s Red Crescent said it will not import scores of thousands of American Pfizer-BioNTech vaccine that a group of U.S.-based benefactors planned to donate to Iran.

However, Khamenei has OK’d vaccine imports from other “safe” places abroad.

Iran in December began the human test phase of its homemade vaccine that it is expected to distribute in the spring.

Iran has struggled to stem the worst virus outbreak in the Middle East, which has infected over 1.2 million people and killed more than 56,000.

COLOMBO, Sri Lanka — Sri Lankan prison authorities have decided to free more than 100 prisoners who are serving jail terms because of their inability to pay fines, in an attempt to contain the spread of COVID-19 within crowded prisons.

By Saturday, 4,121 prisoners had tested positive, along with 129 officers, in five prisons in different parts of the country.

Sri Lankan prisons are highly overcrowded, with more than 26,000 inmates in facilities with the capacity for 10,000.

On Saturday, prison authorities said about 150 inmates who are serving jail terms because they could not pay the fines would be released under a special pardon announced by the government, in order to ease the congestion at the prisons.

Authorities have been releasing prisoners on various grounds since December.

Sri Lanka has seen a fresh outbreak of the disease since October when two clusters — one centered on a garment factory and other on a fish market — emerged in the capital, Colombo, and its suburbs. The prison cluster emerged later.

Confirmed cases from the three clusters grew to 43,525 on Saturday. Sri Lanka’s total number of positive cases since March is 47,304, with 225 fatalities.