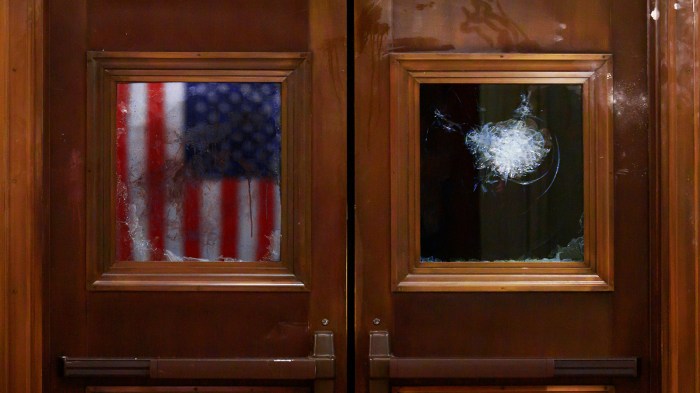 Faith in the integrity of the presidential election has been concerningly low for months — in large part because of President Trump’s repeated false claims that the election was stolen from him. And on Wednesday, we saw an extreme example of the consequences of that mistrust when pro-Trump extremists briefly but violently occupied the U.S. Capitol.

This was undoubtedly a historic and disturbing moment. But it’s important to remember that it did not happen in a vacuum, which we can see from polling on topics related to Wednesday’s breach — faith in the election, support for the president, trust in institutions — as well as a comparison with the most analogous event in recent U.S. history: the 2017 Unite the Right rally in Charlottesville, Virginia. Taken together, these suggest that the attack on the Capitol shows how right-wing extremist views have become palatable to more members of an increasingly isolated and angry Trump base, even as they shock the rest of the country.

“There were no ordinary people in Charlottesville, it was just the hardcore extremists. But on Wednesday there were [ordinary people],” said Jonathan Greenblatt, the CEO of the Anti-Defamation League. “In many ways it’s a metaphor for Trumpism. He has taken these ideas and mainstreamed them in a way I think no one thought possible. It came to light Wednesday in an extraordinarily ugly and violent way.”

Polls so far — and we are still very early in this news cycle — have found that a solid majority of Americans opposed the unrest in Washington, D.C. In a YouGov poll, 71 percent of registered voters opposed the “storming of the Capitol” (63 percent of them “strongly”), and 62 percent viewed it as “a threat to democracy.” Similarly, 70 percent of respondents to an Ipsos poll opposed “the protesters who broke into the Capitol.” And, according to a Morning Consult/Politico survey, 59 percent of registered voters think the perpetrators should be viewed as “domestic terrorists.”

However, a not-small 19 percent of Ipsos respondents said that they supported the rioters. In the YouGov poll, 21 percent said the same (including 14 percent who strongly supported storming the Capitol), and 32 percent did not believe that the occupation constituted a threat to democracy. Those who backed it were disproportionately Republican: 45 percent of GOP voters supported the siege, while 43 percent opposed it.

Older polls asking how Americans feel about the legitimacy of the November election — the grievance that fueled the uprising — are also telling. A couple weeks after the election, our colleague Dhrumil Mehta wrote that between two-thirds and three-quarters of Republicans doubted that the election was conducted fairly (it was), according to several polls. And a recent gold-standard1 national poll, conducted Dec. 16-20 by Suffolk University, found that 37 percent of registered voters — including 78 percent of Republicans — did not believe Joe Biden was legitimately elected president.

Those polls asked about people’s confidence in the election results — not whether they were willing to accept the results, which is much harder to measure. You can imagine, for instance, that some people thought the election was unfair but were resigned to the fact that Biden would eventually take office. But there are some polls that suggest a significant number of Republicans wanted to actually overturn the result of a free and fair election and install Trump for a second term. The exact number depends on the poll and its question wording, but in general it is close to the half of Republicans who have said they supported the siege on the Capitol. To wit:

In trying to put this week into context, we don’t have a clear analog. However, one comparison would be the rioting and violence at the Unite the Right rally in Charlottesville in August 2017, where a counter-protestor was killed. Trump weakly condemned those events, as he did with the mob at the Capitol on Wednesday, and in both cases the violence was inextricably linked to issues of white identity and grievance — issues that motivated many perpetrators of the attack on Washington this week.

Polling conducted after Charlottesville found that Republicans were more likely to express a strong attachment to a white identity than other Americans. For instance, a survey from Reuters/Ipsos and the University of Virginia Center for Politics found that while about one-third of Americans agreed that “America must preserve its White European heritage,” twice as many Republicans (44 percent) agreed as Democrats (22 percent). And whereas 38 percent of Republicans felt that racial minorities were “under attack” in the United States, 63 percent said the same of white people. So even though polls generally found that 10 percent or less of all respondents were supportive of concepts like “white nationalism” or groups like the “alt-right” when they were called by those names, a substantial number of Republicans felt their white identity was under threat and needed to be protected, aligning themselves with elements of white supremacist ideology once the label was removed.

What happened following Charlottesville might still provide some clues to where things will go from here. After the Unite the Right rally, there was some splintering among far-right groups, according to Alex Newhouse, the research lead at the Center on Terrorism, Extremism, and Counterterrorism at Middlebury College. The Proud Boys, for example, battled internal turmoil over some members’ attendance at the rally and some of its leaders made an effort to distance the group from white supremacy, at least on paper, Newhouse said. But other far-right groups were roused by the events in Charlottesville.

“Despite the public outrage, despite the death of a woman and the arrests that followed, the white supremacists were emboldened, especially after the president said there were ‘fine people on both sides,’” said Greenblatt.

For the wider American public, Charlottesville was a wake-up call that revealed how hearty the white supremacist and neo-Nazi movements remain in the United States. But while many politicians, including Republicans, condemned the rally, Trump’s response only further bolstered existing far-right views, Newhouse said.

“These far-right groups were feeling more and more isolated from mainstream media and mainstream politics, and some of them saw Trump as their only defender in that,” Newhouse said.

There are many differences between these two events, but one important distinction is the fact that, as Greenblatt mentioned, the Unite the Right rally was attended almost exclusively by white nationalists, while Wednesday’s insurrection at the Capitol included many more people who aren’t part of an organized white supremacist group. This, Greenblatt stressed, is concerning as it indicates that these ideas are seeping out of the fringes and into the mainstream. And that seepage, combined with fears over white identity and Trump’s incitement, may have broadened Republican receptiveness to political violence. A January 2020 study of Republican voters by political scientist Larry Bartels found that 51 percent agreed that the “traditional American way of life is disappearing so fast that we may have to use force to save it.”

And these dramatic events are products of a much larger issue: Faith in our institutions and in democracy itself is eroding in this country. Last year, a report from the Democracy Fund’s Voter Study Group found that a third of Americans had supported authoritarian ideas at some point in the previous three years, and polling from YouGov Blue that our colleagues reported on last year found that Republicans, in particular, were souring on democracy and the institutions that uphold it. As the events of Wednesday make frighteningly clear, this is not simply a philosophical debate. It’s a real and present threat to our very way of life.

Sorgente articolo:
Trump Helped Take Extremist Views From The Fringes Of Society To A Mob Attacking The Capitol – FiveThirtyEight