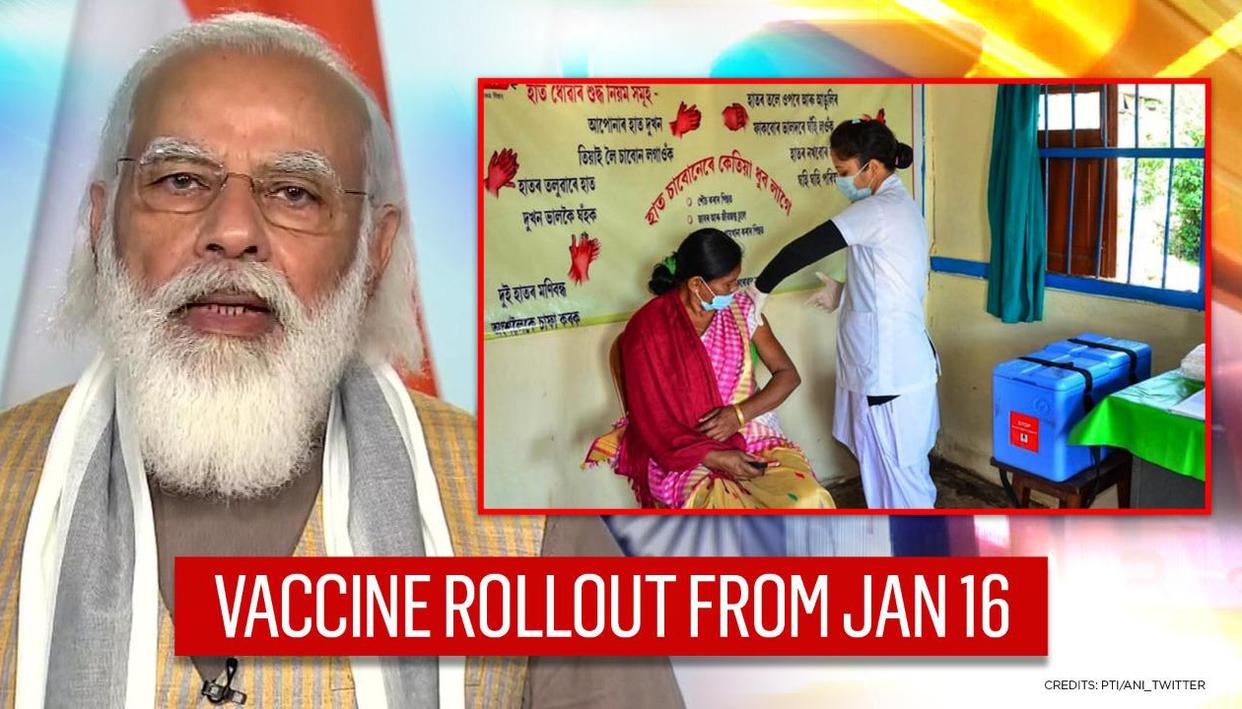 After two successful vaccine ‘dry run’, the Centre has decided to kick-off the nationwide vaccination drive on 16 January after forthcoming festivals including Lohri, Makar Sankranti, Pongal, Magh Bihu etc, said government sources on Saturday. The decision came after the Prime Minister chaired a high-level review meeting with Cabinet Secretary, Principal Secretary to PM, Health Secretary, and other senior officials to review the status of COVID-19 in the country along with the preparedness of the State/UTs for COVID vaccination. The Prime Minister will interact with all CMs on Monday about the same.

Priority will be given to the healthcare workers and the frontline workers, estimated to be around 3 crores in number, which are currently being registered on the government’s CO-Win App – 75 lakh benificiaries already registered. Followed by those, above 50 years of age and the under-50 population groups with co-morbidities numbering around 27 crores will be vaccinated by July.  More than 61,000 programme managers, 2 lakh vaccinators and 3.7 lakh other vaccination team members have been trained so far as part of trainings at States, Districts and Block levels. The government is yet to place an official order with COVISHIELD manufacturer – Serum Institute of India (SII), which has stocked 50 million doses for India.

With India’s COVID-19 tally touching 1,04,31,639 cases and active cases falling to 2,24,190, the nation held its vaccine dry run across 700 districts across all states/ UTs in India barring for Uttar Pradesh and Haryana on January 8. In the previous vaccine dry run,  a total of 286 session sites spread across 125 districts was held on January 2. Both dry runs were successful and aimed at ensuring efficient planning and management for vaccine delivery in all the states and Union Territories, with Union Health Minister Dr Harsh Vardhan reviewing the dry run in Chennai earlier in the day.

On Sunday, Drug Controller General of India (DCGI) VG Somani announced that the vaccines of Serum Institue of India (Covishield) and Bharat Biotech (Covaxin) have been granted permission for restricted use in an emergency situation. Covishield – a Recombinant Chimpanzee Adenovirus vector vaccine – has an efficacy of 70.42%, with interim safety and immunogenicity data of Phase-II/III trials submitted to the SEC. 50 million doses have been stockpiled.

Meanwhile, Covaxin – a Whole Virion Inactivated Corona Virus Vaccine – 22,500 participants vaccinated in Phase-III trials and was found to be safe as per the data available till date. On Thursday, Bharat Biotech (BBL)  said that the company had completed its phase-3 clinical trials enrollment of 25,800 participants. As informed by the ICMR, BBL has already administered 24,000 volunteers with the first shot of its vaccine and 5000 have been adminstered with the second dose – with no adverse events being found. 20 million doses have been stocked  and both vaccines’ phase-3 trials are ongoing.

MP CM clarifies on death of man 10 days after COVAXIN trial, terms it as a ‘misconception’

COVAXIN completes enrollment of 25,800 volunteers for phase-3 trials ahead of ‘dry run’