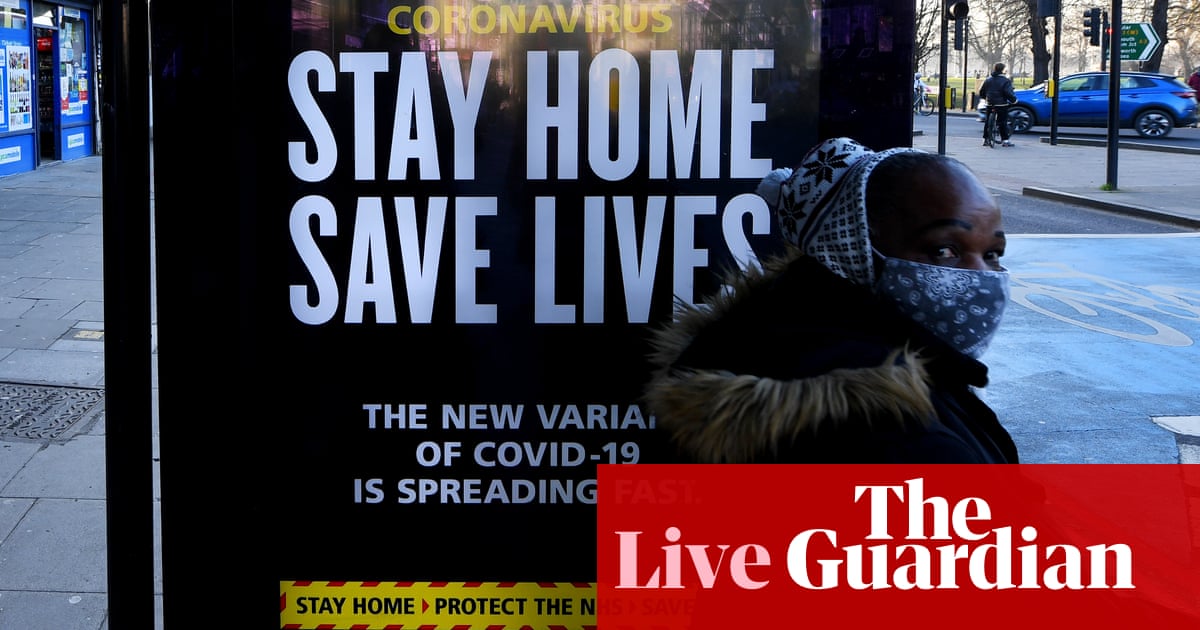 France should consider closing its borders with the UK and other countries that have a strong presence of the UK variant, a French epidemiologist and government adviser has said.

In Thailand, health officials believe the latest wave is likely to slow down before the end of January, but have urged the public to continue following preventative measures.

The country, which had gone for months with virtually no local transmission, recorded a surge in cases last month when the virus began spreading among migrants working in the fishing industry. Infections have since been recorded across more than half of the country’s provinces, prompting the closure of all state and private schools. In Bangkok, which was deemed a high-risk zone, entertainment venues, gyms and massage parlours were shut, though restaurants and shopping malls were kept open.

The number of cases has since doubled from a little more than 5,000 in late December, to more than 10,500 as of Monday.

Officials at the country’s Centre of Covid-19 Situation Administration said they believed the current wave was now stable and said that 21 affected provinces had reported no new cases over the past seven days.

However, two field hospitals will begin operating this week in Samut Sakhon province, one of the worst affected areas. On Sunday, almost 300 migrant workers were discharged from a separate field hospital set up in the province.

The worst is yet to come for the UK, as the new highly infectious variants of the virus rampages across the country, the government’s chief medical adviser Chris Whitty has warned. He told the BBC:

The next few weeks are going to be the worst weeks of this pandemic in terms of numbers into the NHS (National Health Service). What we need to do before the vaccines have had their effect, because it will take several weeks before that happens, we need to really double down.

Zahawi said vaccinations were “the greatest invention known to humankind”, though told Times Radio they would not be made compulsory in the UK.

You don’t want to have to go down the route of mandating vaccines because that would be completely wrong, we don’t have those sorts of values in the UK. We want them to see the value … to themselves and to the community. This is the greatest invention known to humankind.

But, the moment you say it is mandatory, there will be those that say ‘well, I don’t want to be vaccinated’ – hence why we have used the word offered.

If we need to go to 24-hour work we will absolutely go 24 hours a day to make sure we vaccinate as quickly as we can.

In the UK, ministers appear to have downgraded their promise to vaccinate the most vulnerable by mid-February, committing only to offering them an inoculation by that point.

The prime minister Boris Johnson said last week that they would have received their first jab by that date – and that daily figures for vaccinations carried out would be published from this week. But, speaking to Sky News, the UK’s vaccines minister Nadhim Zahawi has said:

The top four categories, actually, for the UK is 15 million people, in England it’s about 12 million people, so we will have offered a vaccination to all of those people.

Pressed on the difference between being offered a jab and being vaccinated, he said:

When you offer a vaccination it doesn’t mean a Royal Mail letter, it means the vaccine and the needle and the jab are ready for you. What you will see us publishing is the total numbers of people being vaccinated, not being offered a vaccine, and that’s the number to hold us to account to.

Zahawi has used slightly more temperate language than the prime minister in the past, saying that meeting Johnson’s target would be “challenging” and pledging instead to offer vaccines to the most vulnerable by the date the prime minister set.

Passenger numbers at London’s Heathrow airport were down 72.7% in 2020, with 22.1 million people travelling through it.

In December, demand fell by 82.9% to 1.1 million as the new variant of the virus spread in the UK. Heathrow’s chief executive John Holland-Kaye said:

The past year has been incredibly challenging for aviation. While we support tightening border controls temporarily by introducing pre-departure testing for international arrivals, as well as quarantine, this is not sustainable.

The aviation industry is the cornerstone of the UK economy but is fighting for survival. We need a road map out of this lockdown and a full waiver of business rates.

This is an opportunity for the government to show leadership in creating a common international standard for pre-departure testing that will allow travel and trade to restart safely so that we can start to deliver the prime minister’s vision of a global Britain.

Hello, I’m taking over from Helen Sullivan and will be with you for the next few hours. If you’d like to draw my attention to anything, your best bet’s probably Twitter, where I’m KevinJRawlinson.

That’s it from me, Helen Sullivan, for today. Thanks for following along.

Little is still known about the first victim, including his name, while the market where the first reported clusters of cases were traced back remains closed, surrounded by boarding.

Here are the key global developments from the last few hours:

With the City of London deserted once more, its streets only populated by the occasional Deliveroo driver or tumbleweed-seeking photographer, it seems a strange time to be completing the largest office building the capital has ever seen, not least because the very future of the workplace is now in question.

But, rising far above the Cheesegrater and the Walkie-Talkie, dwarfing the now fun-sized Gherkin and boasting the floor area of almost all three combined, 22 Bishopsgate stands as the mother of all office towers. It is the City’s menacing final boss, a glacial hulk that fills its plot to the very edges and rises directly up until it hits the flight path of passing jets. The building muscles into every panorama of London, its broad girth dominating the centre of the skyline and congealing the Square Mile’s distinctive individual silhouettes into one great, grey lump.

It is the absurdist conclusion of three decades of steroidal growth, the final product of superheated land values stretching loose planning rules to breaking point. And, just as the building is being handed over to its first tenants to fit out, it feels like a monument from another epoch. Remember when we used to commute to the office?

The full story now on China agreeing to let the WHO Covid investigators into the country:

China agrees to let in WHO team investigating Covid origins