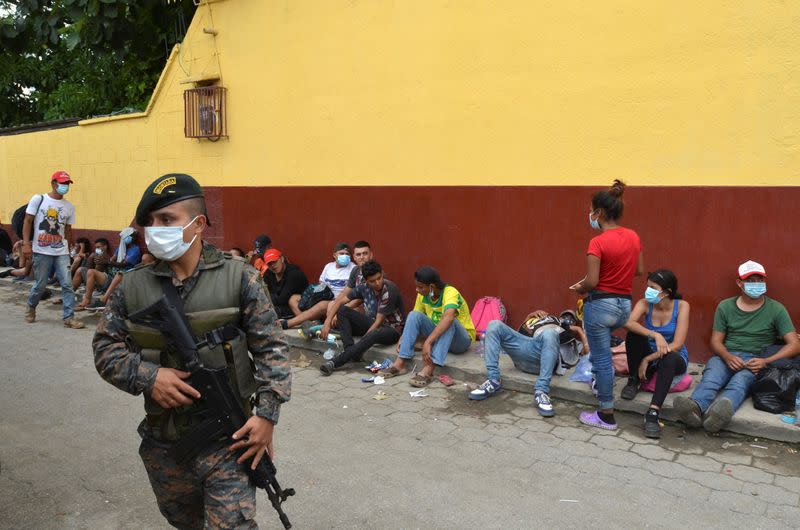 TAPACHULA, Mexico (Reuters) – Guatemalan and Honduran soldiers will be deployed to prevent new U.S.-bound migrant caravans from advancing, military officials said, amid growing desperation among those seeking to cross and signs that some groups will depart later this month.

Two devastating hurricanes late last year along with severe economic fallout from the coronavirus pandemic have pushed millions of people in the already-poor region closer to hunger, leading to a steady rise in U.S.-bound migration through Mexico.

In the Mexican border town of Tapachula, which sits just north of Guatemala, frustrated groups of migrants who had already succeeded in crossing the border pleaded with officials to provide them with humanitarian visas to let them cross.

“We just want them to give us an answer,” shouted one distraught migrant, Suset Palmares, a Cuban who wore a face mask like most others around her.

Mexican soldiers decked out in riot gear stood nearby as migration officials with bullhorns ordered migrants gathered on a street and blocking traffic to disperse.

In online forums, many Honduras have indicated they plan to leave next weekend in a new caravan, which has caught the attention of U.S. officials who have called on the region’s governments to stop them. Many migrants in recent years have chosen to travel by caravan because being part of a large group offers protection from criminals who might prey on them, even though traveling alone is often faster.

Guatemalan military spokesman Ruben Tellez said on Friday that up to 4,000 soldiers would be deployed to stop the migrants from entering en masse.

“We are going to reinforce our borders,” he said, referring to the country’s land-crossings with Honduras, El Salvador, Belize and Mexico. He said the Guatemalan air force will also take part in the anti-caravan efforts.

General Tito Livio Moreno, Honduras’ senior military officer, said earlier this week that soldiers would also be deployed in his country in a bid to preemptively stop any caravans.

Beyond the security measures, Guatemala’s migration authority announced on Friday that it would allow only Hondurans carrying a valid passport and proof of a negative coronavirus test to enter.

In the past, similar efforts have proved successful in stopping would-be migrants, but they have raised concerns from rights groups of unreasonable limitations on freedom of movement being slapped on desperate people seeking to flee rampant violence and poverty in their home countries.