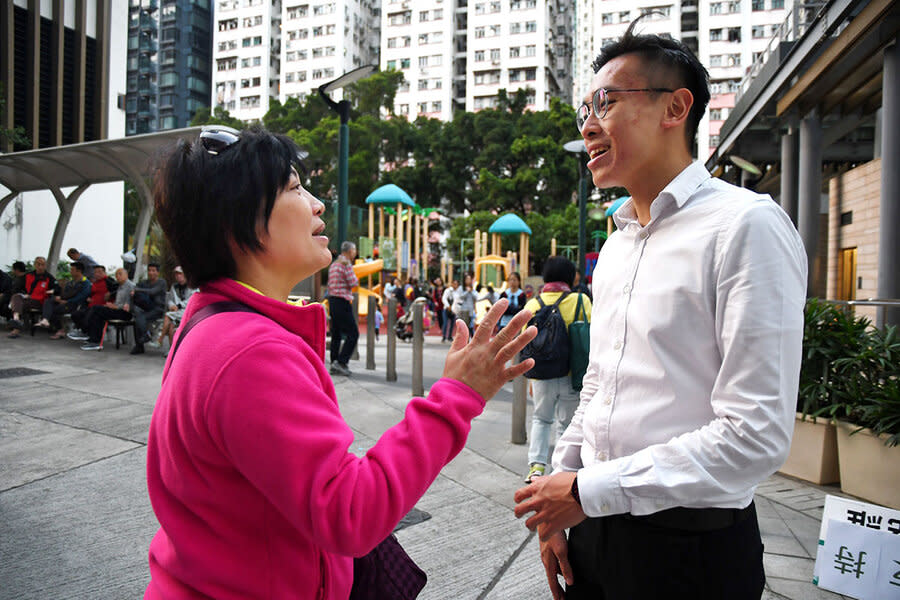 But in a sign of how dramatically Beijing has curtailed political freedoms in Hong Kong over the past six months, last week Mr. Leung and 52 other pro-democracy elected officials and activists – including one U.S. citizen – were snatched up and arrested in early-morning raids by about 1,000 Hong Kong police.

The alleged offense of Mr. Leung and his colleagues? Subversion, for what not long ago would have been a normal political action: organizing and taking part in legislative primaries run by the democrats last July. Subversion is punishable by sentences of up to life in prison.

The crackdown on Hong Kong’s political opposition marks a stark change from a year ago, when record voter turnout produced a landslide win for Mr. Leung and other democracy advocates in November 2019. The election handed pro-democracy and independent candidates control of 17 out of 18 of Hong Kong’s district councils, overturning their longtime domination by pro-Beijing politicians.

That election, taking place amid months of massive protests for democracy in Hong Kong, signaled beyond doubt that a majority of voters sought to maintain and strengthen freedoms, as promised by Beijing when it regained control over the British colony in 1997. But Beijing was moving in the opposite direction, steadily curtailing Hong Kong’s autonomy and judicial independence and instead promoting integration with mainland China.

Alarmed by the popular protests and election victory by pro-democracy candidates, Beijing last June imposed a draconian new national security law that authorities are now wielding to eliminate and punish political opposition to a greater degree than ever before, experts say.

“It’s a big sweep of all the opposition leaders. Essentially, anyone who dares to run in elections thereby is seen as challenging Beijing’s authority in Hong Kong,” says Victoria Tin-bor Hui, an associate professor of political science at the University of Notre Dame and a native of Hong Kong. “The significance is huge.”

Beijing’s calculation was that “if free and fair elections take place, the pro-Beijing parties will not win, so faced with that, the ‘obvious’ solution was to dismantle democratic institutions and eliminate political opposition entirely,” says Alvin Cheung, a Hong Kong barrister and university lecturer now at New York University.

For the mild-mannered Mr. Leung – whose agenda a year ago ranged from planning day tours for older people and Chinese New Year festivities, to modernizing recycling and protecting his district’s wild pigs and century-old banyan trees – aspirations for a political career are now likely to lead to jail.

“There is a good chance Beijing authorities will achieve what they want to achieve: literally, silencing any kind of dissent, including free speech, including by very peaceful means and formal legal channels,” says Professor Hui. “Hong Kong is fast becoming like the rest of China.”

Last May, as Beijing drafted the top-down national security law, Mr. Leung lent his support to Hong Kong citizens who gathered to oppose it – only to be pepper-sprayed in the face by police as he moved to protect the protesters. “More than 300 peaceful protesters were arrested,” he tweeted, with a photo of himself blinded and wincing from the pepper spray.

Mr. Leung warned the law would fuel more radical opposition. “The CCP’s latest move means ‘burnism’ in Hong Kong is inevitable,” he wrote – referring to a strategy of hardcore protesters known as “laam chau” (literally, “stir-fry”) in Cantonese, and captured by the slogan, “if we burn, you burn with us.”

Then in a swift, secretive move, Beijing bypassed Hong Kong’s legislature and enacted the law on June 30. Overnight, not only Hong Kong citizens, but anyone, risked being charged for broadly defined national security crimes – secession, subversion, terrorism, and collusion with foreign “elements” – with a maximum penalty of life in prison. The law allows Chinese state-security agents to operate in Hong Kong, where they can take jurisdiction of cases, apprehend people, and send them to the mainland to be tried in courts controlled by the Communist Party.

Since the law passed, authorities have used it to arrest scores of opposition politicians, activists, and journalists, as well as to curtail free speech and ban protest slogans – leading some to hold up blank signs instead. In an effort to eliminate dissent, authorities have cracked down on art and education, censoring textbooks and curricula and firing professors.

“It’s a totalitarian drive for control over Hong Kong that we are witnessing,” spreading a mood of fear, uncertainty, and helplessness, says Kenneth Chan, associate professor of government and international studies at Hong Kong Baptist University.

By the end of July, Mr. Leung and 11 other pro-democracy candidates had been disqualified from running in Legislative Council elections scheduled for September. Hong Kong’s chief executive, Carrie Lam – selected by a pro-Beijing committee of 1,200 – later postponed the election, citing the pandemic.

In October, in his last tweets prior to his arrest, Mr. Leung commented on troubling changes at his own university, where professors with strong ties to China’s Communist Party were taking over research and development. “This shall signal the end of academic freedom and institutional autonomy at HKU,” he wrote, but “I’m confident that HKUers will continue to fight.”

The feeling of the city’s autonomy rapidly deteriorating is palpable, residents say. “The entire atmosphere has … worsened over the last six months,” says Professor Chan. “People are still very clear-minded. They know what is happening. What they don’t know is what will happen to themselves.”

With the world in disarray from the pandemic and populist challenges to democracy, Beijing has been emboldened, analysts say, and Hong Kong’s embattled activists such as Mr. Leung need international support more than ever. Many advocates have urged the United States and its allies to challenge Beijing over human rights violations in Hong Kong. The police raids last week included the arrest on national security grounds of U.S. citizen John Clancey, chairman of the Asian Human Rights Commission, who is treasurer of a pro-democracy group involved in last summer’s primaries.

Another important step, experts add, is for democratic countries to open their doors wider to immigration from Hong Kong. A new British visa allows certain Hong Kong residents to work and study in the United Kingdom for five years, and then apply for citizenship.

“Lifeboat programs” that offer safe haven are especially important for those who are less affluent, says Dr. Cheung, who has classmates among those arrested last week. “It’s the middle class and lower-class people who will bear the brunt of Beijing’s retributions, but I don’t see any meaningful effort by any country to set up a lifeboat scheme for those people,” he says. “I do not plan ever to return.”

For Mr. Leung, that exit route may already be closed. Once arrested, even if released on bail, Hong Kong’s activists must surrender their passports and report regularly to police. “Only those people not on the regime’s radar can emigrate,” says Professor Hui.

As Hong Kongers braced for Beijing’s crackdown last year, they talked about “how to prepare for the coming totalitarian era,” she says – looking into how people survived in Eastern Europe in the Soviet era, for example. “Even if you cannot talk to fellow supporters, at least make eye contact,” she says, “continue to make friends and devote time to community service, keep civil society alive, and wait for the light at the end of the tunnel.”

Read this story at csmonitor.com

Become a part of the Monitor community