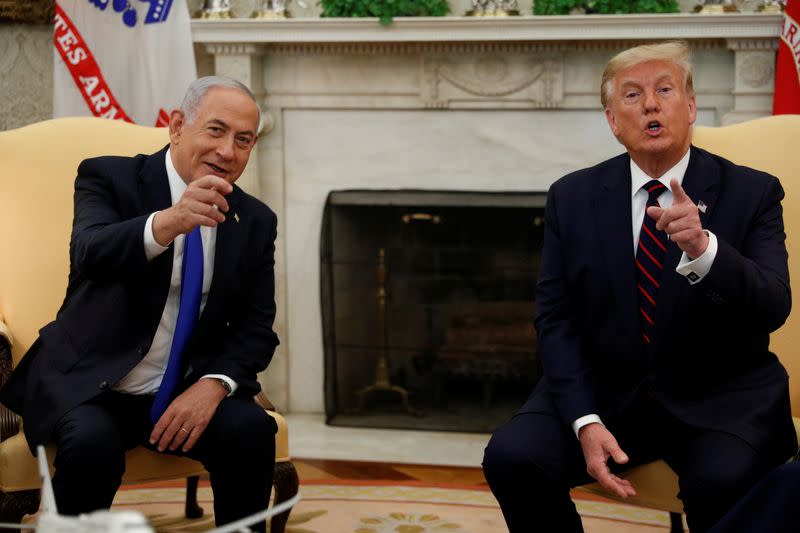 A photo of Netanyahu sitting next to Trump at a White House meeting had long taken pride of place on the official @netanyahu account, testimony to the conservative Israeli leader’s close ties with the Republican president and his popularity in Israel.

Early on Tuesday, another photo, showing Netanyahu being injected with the coronavirus vaccine, topped the page, along with the slogan for Israel’s inoculation campaign: “Citizens of Israel, we are returning to life”.

Netanyahu had kept the photo of his meeting with Trump, long in lockstep with him over a tough policy towards Iran and the Palestinians, on the site even after the Republican president’s defeat by Democrat Joe Biden in the U.S. election in November.

The photo was briefly replaced with a Hanukkah holiday-themed image last month, raising media speculation that Netanyahu had decided to distance himself from Trump.

But when the eight-day Jewish festival was over, Trump reappeared – although no longer alone with Netanyahu in a photo.

Instead, Netanyahu posted a banner image of himself with the president and the foreign ministers of the United Arab Emirates and Bahrain signing an agreement at the White House in September on formalising ties with Israel.

No explanation was given on Netanyahu’s site for Trump’s disappearance, a day before the U.S. House of Representatives was expected to begin considering his second impeachment on after last week’s storming of the Capitol.

Trump’s own account was permanently suspended by Twitter on Friday due to what the social media giant described as the risk of further incitement to violence.

In televised remarks on Thursday, Netanyahu called the events at the Capitol a “rampage” and said he was certain American democracy would prevail.