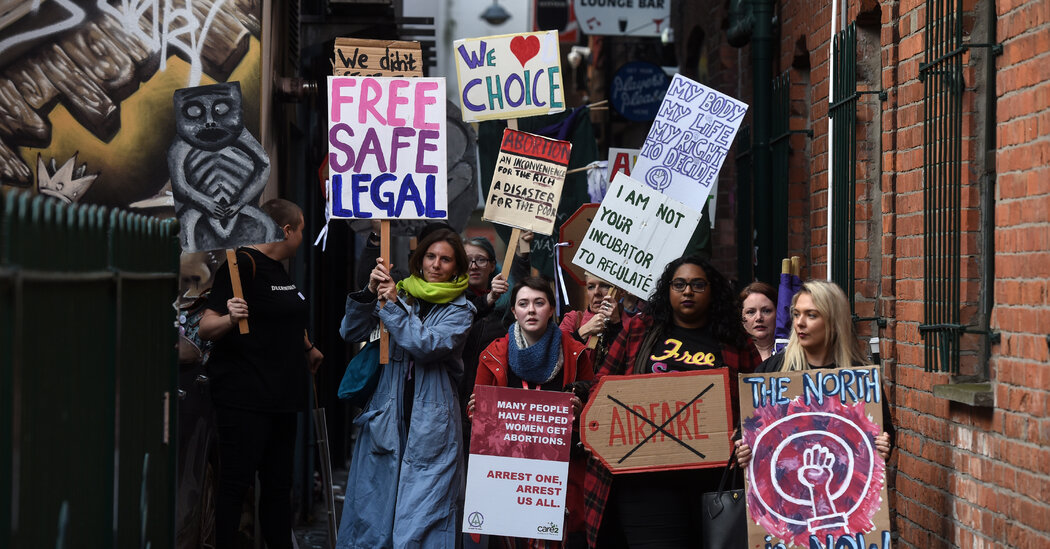 A human rights group in Northern Ireland is taking legal action against the government over its failure to provide abortion access, the group announced on Monday, highlighting the continuing struggle for safe abortions more than a year after the procedure was legalized in the region.

The organization, the Northern Ireland Human Rights Commission, cited deep concerns about a lack of abortion services, which it says has left a health care void for many women and girls.

Abortion was legalized in Northern Ireland in October 2019, overturning one of the world’s most restrictive abortion laws, but in the months since, women seeking the procedure have faced a number of roadblocks.

Les Allamby, the chief commissioner of the independent body behind the lawsuit, said it was important to remember that the issue “is about a critical health service for women.”

“Our focus is to ensure that human rights are upheld and the law passed in Westminster is implemented in practice,” said Mr. Allamby, whose group is answerable to British Parliament.

The legal action — a judicial review proceeding filed in Northern Ireland’s High Court — takes aim at the secretary of state, Brandon Lewis; the Northern Ireland Executive; and the Department of Health for Northern Ireland for failing to commission and fund abortion services.

The change to the region’s abortion law was pushed through in an amendment to a routine bill on governance of Northern Ireland and passed in the British Parliament in 2019. At the same time, the Parliament legalized same-sex marriage in Northern Ireland.

Legal abortions began in the nation in April 2020, but the procedure has remained largely unavailable, with resistance coming from anti-abortion and church groups.

With the coronavirus ravaging the region, producing the highest number of cases seen since this pandemic began, access has become even more limited. Hospitals are stretched, diverting essential health care workers elsewhere in some cases.

This week, one of the five trusts that oversees hospitals in the region closed its abortion clinic when a health care provider went on medical leave. Another trust shut its abortion services from October until Jan. 4 because of a lack of financial resources.

Travel restrictions have also exacerbated an already difficult situation, as many women in Northern Ireland have travelled to England to have the procedure. But the risk to their own health and the travel restrictions throughout the last year have made that all but impossible, rights groups say.

The region’s Department of Health has failed to issue any guidance on how abortion services should be provided. The department previously issued a statement to the Belfast Telegraph saying it was not required to commission abortion services. It said further decisions about commissioning abortion services would come from the Northern Ireland Executive and Assembly after a public consultation.

But the Northern Ireland Executive, the devolved government of the region, received requests from the department in April and May seeking to commission abortions, and has yet to bring forth a debate.

Critics say the inaction is an excuse to delay the implementation of a robust program over an issue that remains contentious, with some of the political parties in power still advocating against access to abortion. The Department of Heath and Northern Ireland Executive did not immediately respond to requests for comment.

But lawmakers in British Parliament have voiced concern about the issue. The deputy leader of the Alliance Party, Stephen Farry, tweeting on Sunday: “It shouldn’t fall again to the courts to ensure delivery of the law. The law on abortion is now settled.”

While the rest of the United Kingdom has made way for telemedicine services for those seeking abortions, Northern Ireland has not, despite the health minister being given specific powers to allow for telemedicine if necessary, which he declined.

Alliance for Choice, a Northern Irish reproductive rights group and a vocal critic of the lack of services, voiced its support for the legal action and said the issue has already reached a crisis point for many women and girls.

Emma Campbell, the group’s co-chairwoman, said that for most women seeking an early-term abortion, the process is a simple procedure of taking five pills. Her group is providing “abortion doulas” to give advice and support either by telephone or by message.

“We get loads of calls from people who don’t know, who are cross and angry and upset,” Ms. Campbell said.

“It is appalling that, yet again, litigation is needed to uphold the right to abortion health care in Northern Ireland,” Patrick Corrigan, the Northern Ireland director, said in a statement. “Over a year since abortion was decriminalized in Northern Ireland and the government’s failure to commission and fund services have left women in a vulnerable and dangerous position.”