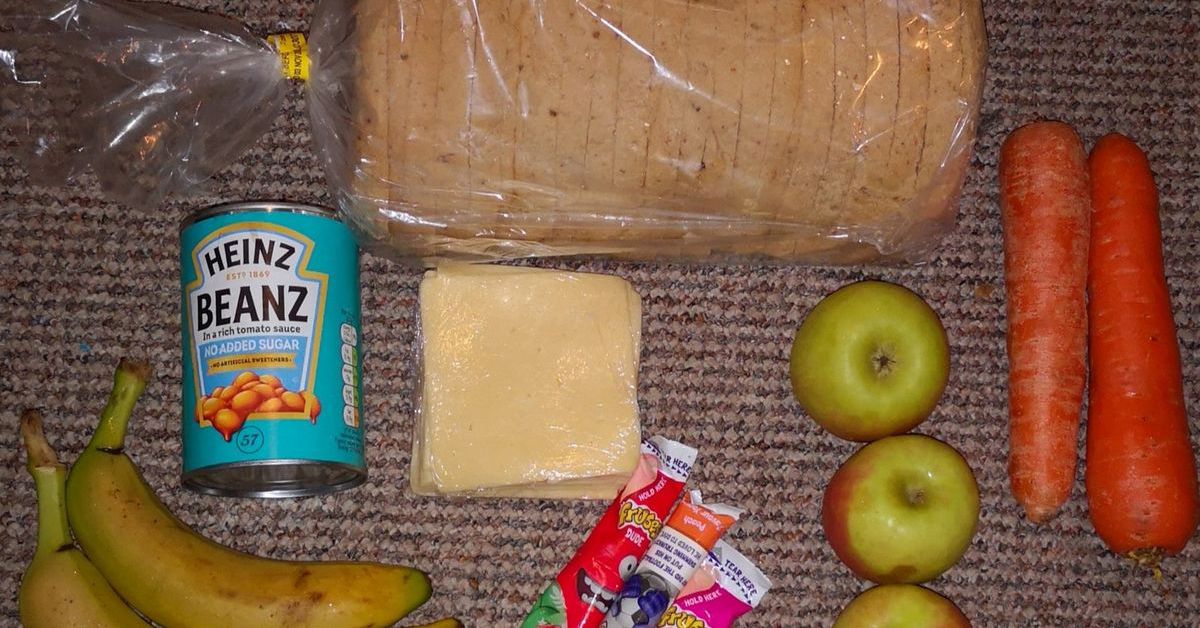 Chartwells, a private contractor appointed by the government to provide £30-worth of school meals for children across the U.K., has come under fire for apparently providing some families with as little as £5-worth of food. The Manchester United and England footballer Marcus Rashford, who has been leading a food poverty campaign on behalf of the country’s most vulnerable children during the coronavirus crisis, said food provided by Chartwells was “unacceptable” and that children deserved “better.”

Since the country was placed into national lockdown and schools were closed last Wednesday, food parcels have been given as an option for children eligible for free school meals. The alternative is food vouchers for £30, which can be redeemed at participating supermarkets. The official Department of Education free school meal voucher scheme — whose extension Rashford had to fight for last year — is closed, with guidance saying it will “reopen shortly” as of 4 January 2021.

Schools are currently discouraged from offering the substitute vouchers ahead of food parcels by official Department of Education guidance:

We strongly encourage schools to work with their school catering team or food provider to provide food parcels to eligible free school meal pupils who are at home. Where school kitchens are open this should be the approach taken by schools.

The guidance adds that there are “significant benefits of providing food parcels.” Those include, the department says, “the confidence that a nutritious and varied range of food is being provided in line with guidance published by the Lead Association for Catering in Education, and that meets the school food standards. The images of food parcels circulating widely online do not meet that confidence.

One package which has been shared widely online by Twitter user @RoadsideMum contained what was calculated to have cost £5.30 if bought from the supermarket ASDA. The intended 10-day supply contained one loaf of slice bread, two carrots, a tin of beans, two potatoes, two bananas, three apples, one tomato, eight slices of cheese, a bag of penne pasta, three tubed yoghurts, and two mini bars of malt loaf.

Issued instead of £30 vouchers. I could do more with £30 to be honest. pic.twitter.com/87LGUTHXEu

On Twitter, Chartwells responded to the post — the evidence of which has since been supported by numerous other examples online — saying that it did not “reflect the specification of one of our hampers.”

While Chartwells claims to be “nourishing young bodies and minds with exceptional food and learning,” its principal aim appears to be to profit from what is both a national crisis and a national outrage. The author, broadcaster, and campaigner, Jack Monore — aka Boot Strap Cook — was among the first to point out the disgraceful inadequacy of the company’s boxes.

Chartwells is the education division of the world’s largest catering company, Compass Group, whose non-executive group chairman Paul Walsh was a former member of David Cameron’s business advisory group, Metro reports. (Walsh is also the executive chairman of the McLaren Group and sits on the boards of Unilever and McDonalds.)

Elsewhere, photographs have emerged of other private companies tasked with providing food parcels for vulnerable children during lockdown. Some have shown carrots divided into portions, red peppers and tomatoes halved, and even a quarter of an onion.

That behaviour has been branded cruel and inhumane; the actual enactment of it “repulsive.”

One of the most repulsive elements of the food parcel photos is knowing somebody was hired and paid to quarter carrots, half tomatoes, and ration slices of bread. Tories prefer to funnel funds into the bureaucracy of distributing food, than give all the money to hungry families.

A spokesperson for the Department for Education said it would look into the issue: “We have clear guidelines and standards for food parcels, which we expect to be followed. Parcels should be nutritious and contain a varied range of food,” they said.

While the inadequacy of government food policy during the novel coronavirus pandemic has hit the headlines this morning, the story itself is not new. The provision of free school meals has been beset by problems linked to private contractors, with Edenred’s administration of vouchers criticised by parents who found that they did not work and were not eligible for enough supermarkets. And in October last year, analysis in a New Statesman report found that private companies chosen by the government had doubled “the retail value for food parcels containing items that were barely edible.” Shadow Justice Minister and MP for Tottenham David Lammy said this morning that government cronyism was coming at the expense of those most in need during the pandemic.

In reference to the New Statesman report, Eater London contributor Sejal Sukhadwala said that the food contained in the parcels was not only insufficient in terms of quantity and quality, but that they pointed to “wider issues, like dietary & cultural needs not catered for & just assuming a stereotypical ‘basic’ diet.” It is evident that in all of the published photographs of the food parcels, the contents represents not the provision of a nutrition, but a caricature of the British packed lunch.

Wider issues with the provision of food parcels for the country’s most vulnerable during the coronavirus crisis were highlighted in a report by the Good Law Project, also last year. Referring to boxes sent to individuals who were told to stay at home and shield, Good Law found that “the scheme was used to palm off on the vulnerable unwanted, and sometimes unsuitable, supplies from elsewhere in the food chain. And that the Government’s preferred contractors, chosen without a tender process, may have reaped substantial profits…”

The scrutiny under which the government finds itself — in large part because of Rashford and Monroe’s efforts — has so far resulted in a series of what startled onlookers are told are “embarrassing” U-turns. And yet, it keeps happening. What that scrutiny — led by the government’s political opponents, in addition to high-profile campaigners — must now do is ensure that cronyism and profit are not allowed to come between hungry children and food at a time of crisis.