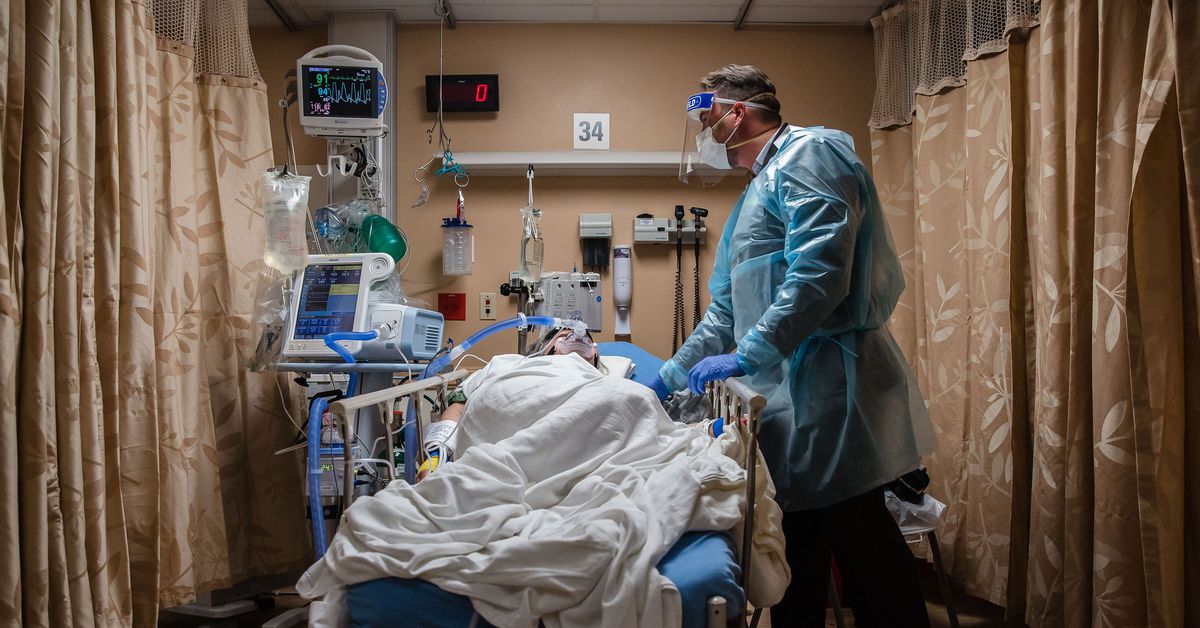 Doctors have been warning for months that, even though they’re better at saving the lives of critically ill Covid-19 patients, those gains will fade if hospitals become overwhelmed like they did in the early days of the pandemic.

With coronavirus deaths now soaring in the US and several other countries, this prediction may be playing out: The crush of new Covid-19 hospital patients is probably leading to more deaths.

When intensive care units go from zero beds occupied to every bed full, patients have a 92 percent increased risk of death from Covid-19, according to a preprint published Wednesday on MedRxiv. (The paper has yet to be peer-reviewed.)

That means that when hospitals are pushed to maximum ICU capacity, the worst-case scenario is a near doubling of the risk of death for severely sick patients, the study found. For instance, a 40-year-old in a full intensive care unit would have the same risk of death as a 51-year-old, the study’s authors — researchers at UK institutions including Imperial College London, University College London, and the Wellcome Trust — estimated.

These risks fell along the gradient: As occupancy rates climbed higher, so did the risk of death. A second new preprint, analyzing data from nearly 20,000 Covid-19 patients in Israel, came to a similar conclusion:

The studies are particularly relevant at a time when more than one-fifth of hospitals with intensive care units in the US are reporting ICU bed occupancy levels of at least 95 percent and the daily coronavirus death count hit an all-time high (4,320 on January 13). The papers are also a grim reminder of why allowing the virus to run rampant is so dangerous, even as doctors have better treatments for the disease and vaccines are being rolled out worldwide.

“I’m saying [high] occupancy leads to mortality,” said Bilal Mateen, an author on the UK paper and a clinician-researcher who works at the Wellcome Trust and Kings College Hospital in London. “So that even if the virus isn’t directly killing you, indirect factors — like how full an ICU is on the day you arrive in hospital — are probably going to change your risk.”

Covid-19 hospitalizations have exacted a heavy toll on hospital systems globally. But with all the terrible news about the pandemic, it’s easy to overlook the incredible amount of progress doctors have made in understanding and treating the disease.

Only a year ago, the medical community knew nothing of this new disease. Doctors thought they were dealing with a viral pneumonia that mainly affected the lungs. “We didn’t think about it as a whole-body viral assault — and yet that’s what we have,” Lewis Kaplan, president of the Society of Critical Care Medicine, told Vox in October. “There’s virtually no organ system — from skin to blood vessels to brain to nose — that is not implicated in one way or another.”

There’s still a lot to learn about Covid-19, but even this shift in understanding has come with improved medical care. Health workers now have numerous evidence-based tools at their disposal to save more lives. For example, there’s strong evidence that common steroids like dexamethasone can reduce the risk of mortality in severely sick in-patients. There is also strong evidence for monoclonal antibodies, such as tocilizumab and sarilumab, which are typically used to treat rheumatoid arthritis.

Putting patients to rest on their stomachs instead of their backs (a practice known as proning) also seems to help, and certain kinds of convalescent plasma are showing promise.

Altogether, these medical advances are why — before the current case surge in the US and abroad — ICU doctors told Vox they generally expected their patients to survive the disease.

But health workers also warned that these gains could disappear as cases start piling up again and doctors, respiratory therapists, and nurses in hospitals become strained.

“When the hospital fills up, everything gets disrupted and a kind of ‘soft rationing’ kicks in,” Lakshman Swamy, who works with the Cambridge Health Alliance, told Vox. “The ICU has to raise the bar on how sick you need to be to get into the ICU. If you add stretched-out staff … you end up basically providing slower, less ideal care to everyone, including the sickest patients.” And that can raise the risk of death for patients.

The new studies quantified the point at which deaths start increasing — and it doesn’t require hospitals reaching maximum capacity.

With the British preprint, Mateen and his colleagues used data from the first Covid-19 wave in the UK, from April to June, to model ICU occupancy — specifically, the number of patients in beds with ventilators — at the time a person was admitted to a hospital. They linked that occupancy data with the odds of survival for patients.

There were 4,032 patients with confirmed or suspected Covid-19 in the study period. The researchers adjusted for patients’ comorbidities and age to make sure those factors weren’t affecting survival outcomes.

But going from zero percent ICU occupancy to 100 percent on the day of a patient’s admission was linked with the even more dramatic 92 percent increased risk of death.

“Every day we delay [strong anti-virus measures] in the context of occupancy being 90 something percent, there are probably people who are dying as a consequence,” said Mateen. As of January 7, 79 percent of ICU beds were occupied across the US, according to the New York Times, with one-fifth of hospitals with intensive care units reporting ICU bed occupancy levels of 95 percent or greater.

The researchers on the Israeli paper, which included all 19,336 Covid-19 patients hospitalized in Israel from mid-July 2020 to early January 2021, also adjusted for age and sex, as well as a patient’s health status on the first day of hospitalization. They found that even under conditions the Israeli government deems manageable for adequate patient care — 500 severely ill patients hospitalized countrywide — the mortality rate of Covid-19 patients starts going up.

Leora Horwitz, an NYU medical professor who has been studying Covid-19 mortality and was not involved in the new preprints, noted that there may be other explanations for the rising death risk as hospitals fill up. For example, there could be a potential selection bias that happens in the ICU: If sicker patients are admitted, compared to less strained days, that would also lead to an increase in mortality.

Even so, she said, “hospital strain probably does contribute,” and the implication couldn’t be clearer: Governments need to do everything possible to prevent infections now.

“The idea behind flattening the curve was that even if we have to have the same number of infections — if we can spread them out over time, we can keep our hospitals from being [overwhelmed],” Horwitz said. “Now that we have a vaccine, we can do even better than flattening the curve — we can drop the total number of infections dramatically,” because people can avoid ever getting the disease.

Communities need to drive down infections through social distancing and mask-wearing, while governments rapidly deploy the Covid-19 vaccine.

But around the world, these measures aren’t happening quickly or effectively enough, as Mateen is seeing firsthand in London. He’s supposed to return to part-time work helping treat Covid-19 patients on Friday, but the context is different from his last hospital shifts in the fall. One in 30 people in London are now testing positive for the virus — following the arrival of a new, highly contagious variant in the UK — and the city’s mayor just declared a state of emergency, warning “more people will die” as hospitals become overwhelmed.

Mateen’s doctor friends — who have been “shouldering an enormous burden” for months — are anxiously circulating stories about UK hospitals having to ration oxygen where supplies are running out.

“There’s the emotional voice in your head saying ‘why on earth are we being forced to have this conversation” about rationing care, Mateen said, “when there’s no legitimate reason to have got to this point.’”

Every day at Vox, we aim to answer your most important questions and provide you, and our audience around the world, with information that empowers you through understanding. Vox’s work is reaching more people than ever, but our distinctive brand of explanatory journalism takes resources. Your financial contribution will not constitute a donation, but it will enable our staff to continue to offer free articles, videos, and podcasts to all who need them. Please consider making a contribution to Vox today, from as little as $3.