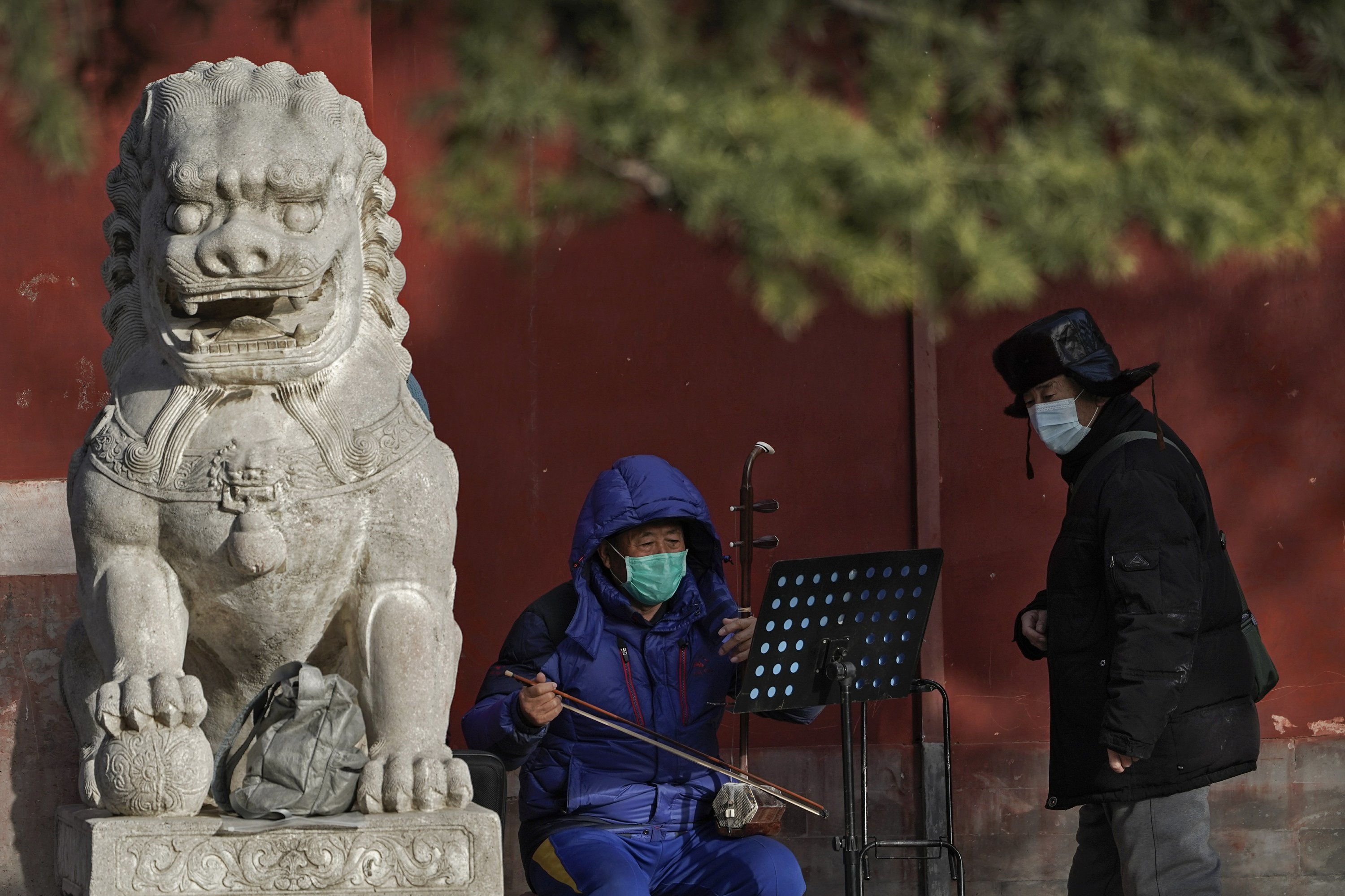 WICHITA, Kan. — Students in Wichita, Kan., are resuming in-person learning, and bars and restaurants in the Kansas City area can stay open later while keeping limits on capacity because of the pandemic.

The Wichita school district is bringing elementary students back to classrooms Wednesday, after sending them home late last year because of a lack of substitute teachers and rising coronavirus cases.

The district plans for middle and high school students to begin later this month a hybrid mode of in-person learning part of the time and at home the rest. The older students have been remote learning since the start of the academic year.

Meanwhile, bars and restaurants in the Kanas City area are being allowed to remain open past midnight starting Wednesday as officials seek to help the businesses.

The U.S. will allow more people to get coronavirus shots, including those 65 and older. China says the World Health Organization experts will begin their fact-finding visit this week in the central city of Wuhan where the coronavirus was first detected in late 2019. More lawmakers forced into the Capitol lockdown have tested positive. One lawmaker criticized Republicans who declined masks during the lockdown, calling it “selfish idiocy.”

Tokyo residents are questioning holding the Olympics in July because of the coronavirus pandemic. India has started shipping COVID-19 vaccine to cities. The EU regulator is considering the Oxford-AstraZeneca vaccine to be licensed to the 27-nation bloc.

BATON ROUGE, La. — Louisiana Gov. John Bel Edwards is calling on the state’s employers to keep workers at home if possible, but the governor says he won’t tighten his current pandemic restrictions on businesses any further.

Edwards said Tuesday that he has renewed the same coronavirus rules that have been in place since late November. They had been scheduled to expire Wednesday.

Those rules include a statewide mask mandate and provisions limiting bars to outdoor and delivery service. They also include restrictions on the number of customers allowed in nonessential businesses such as restaurants and salons.

CHICAGO — Illinois’ top doctor has received a COVID-19 vaccine at a clinic in suburban Chicago.

Department of Public Health Director Dr. Ngozi Ezike gave an emotional address Tuesday before getting the shot saying she was getting vaccinated for her family and hopes vaccinations are soon widespread.

She calls the vaccine the next step toward “getting our normal lives back.”

SALT LAKE CITY — The owner and CEO of a Utah pharmacy has been accused of mislabeling large amounts of malaria drugs imported from China that outgoing President Donald Trump incorrectly touted last year as a “miracle” treatment for the coronavirus.

Dan Richards, the operator of Meds In Motion, was charged Monday with a misdemeanor for receiving large amounts of chloroquine and hydroxychloroquine from an unregistered manufacturer in China that were incorrectly labeled as Boswellia serrata extract, an herbal supplement.

The U.S. Food and Drug Administration revoked permission to use the drug to treat the coronavirus last year.

TUNIS, Tunisia — Tunisia’s government is imposing a nationwide four-day anti-coronavirus lockdown starting Thursday, which coincides with the anniversary of the toppling of the country’s autocratic leader 10 years ago.

Health minister Fawzi Madhi announced the measure, noting the lockdown through Sunday will include an overnight curfew from 4 p.m. to 6 a.m. Schools are also being shut for 10 days from Thursday.

Thursday marks the 10th anniversary of the ouster on Jan. 14, 2011, of former Tunisian President Zine El Abidine Ben Ali. The autocrat led Tunisia for 23 years before the eruption of nationwide protests that inspired what became known as the Arab Spring. The movement unleashed revolt across the Arab world, toppling several autocratic leaders. Ben Ali died in 2019.

NEW YORK — Gov. Andrew Cuomo expanded the vaccine eligibility requirements in New York to include anyone over the age of 65.

Cuomo said Tuesday the state is following new federal guidance issued by the CDC. On Monday, people age 75 and up and a much longer list of workers, including transit employees, grocery clerks, teachers, police officers, firefighters and others became eligible to get the vaccine.

Cuomo says it will take six months to vaccinate 7 million New Yorkers, less than half of the state’s 19 million residents, if the state keeps receiving only 300,000 vaccine doses a week.

He added he wants to open rapid testing sites in New York City and eventually other city centers throughout the state.

BOSTON — Massachusetts is preparing to open its first mass vaccination site this week at Gillette Stadium.

Starting Monday, the site will begin giving shots to first responders and administer up to 300 doses a day. Capacity will expand over time to up to 5,000 doses a day or more, eventually extending to the general population.

On Monday, the state began administering vaccine doses to first responders, including police, firefighters and EMTs. Vaccines are not expected to be available to the general public until April.

TORONTO — Canada’s most populous province of Ontario is issuing a stay-at-home starting Thursday, with exemptions for essential activities such as accessing health care or shopping for groceries.

Ontario reported 2,903 new coronavirus cases on Tuesday, including eight new cases of a variant from the United Kingdom. Ford says schools in many regions will remained close for in class in learning until Feb. 10.

MADRID — Spain is reporting 25,438 coronavirus cases and more than 400 deaths for the second day in a row.

However, the Health Minister Salvador Illa says the country is trying to avoid a strict lockdown that impacted the economy in March.

Spain has 2.1 million infections and at least 52,000 confirmed deaths.

ASPEN, Colo. — The Aspen area will close indoor dining at restaurants on Sunday as the county reports the highest incidence rate for the coronavirus in Colorado.

The Pitkin County Board of Health’s unanimous decision will limit lodging capacity in Aspen and Snowmass Village to 50%. Ski mountains will remain open without a reservation system.

Outdoor dining, takeout and delivery at restaurants will still be available. Tables can only contain people from within the same household.

CHICAGO — A Democratic congressman from Illinois who was forced to go into lockdown during last week’s deadly siege at the Capitol has tested positive for COVID-19.

U.S. Rep. Brad Schneider issued a statement Tuesday saying he was “forced to spend several hours” confined with other lawmakers and is criticizing Republican members of Congress who refused to wear masks that were offered during the lockdown.

He says he’s in strict isolation and worried about the health of family members. At least two other Democrats, Rep. Pramila Jayapal of Washington and Rep. Bonnie Watson Coleman of New Jersey, announced positive tests.

PHOENIX — Arizona set a one-day record for daily deaths at 335 and hospitalizations topped 5,000 for the first time.

With its health care system struggling to cope, the state had a record 5,082 COVID-19 patients occupying inpatient beds on Monday. That included a record 1,183 in intensive care beds.

The government this week must extend, lift or tighten restrictions that expire on citizens’ travel and on businesses such as restaurants and cafes.

Italy added 14,242 coronavirus infections on Tuesday, increasing the tally to 2.3 million cases. There have been nearly 80,000 confirmed deaths, sixth highest in the world.

MADRID — Spain received the first doses of the Moderna vaccine against the coronavirus on Tuesday despite the challenges of a record snowfall and cold temperatures have brought to land and air transportation.

The 35,700 doses, enough for 12,850 people, traveled from Belgium in a truck and arrived at a Health Ministry-run warehouse at an undisclosed location in central Spain, the government said Tuesday.

But authorities in Madrid, one of the worst-hit regions by Friday’s blizzard, were still awaiting a separate batch of 48,750 doses from Pfizer-BioNTech that had been due to arrive Monday by plane but had to be diverted to a northern Spanish airport.

The regional health department says the delay was not expected to affect the vaccine rollout, which was ongoing in nursing homes and among health personnel with the existing doses.

GENEVA — Swiss regulators have approved the Moderna coronavirus vaccine for use after clearing the BioNTech-Pfizer vaccine last month.

Switzerland’s Swissmedic agency says the Moderna vaccine, which was OK’d by the European Union last week, was approved for all adults over 18.

Switzerland has ordered 7.5 million doses of the vaccine and expects an initial delivery of 200,000 doses “in the next few days.”

Together with the BioNTech-Pfizer vaccine, the country expects to have around half a million doses of vaccine available this month.

Second, states should immediately start vaccinating other groups lower down the priority scale, including people age 65 and older, and younger people with certain health problems.

That aligns with President-elect Joe Biden’s approach, who earlier called for the government to stop holding back doses. On Monday, the government had distributed about 25.5 million doses, but only about 9 million people had received their first shot.

The U.S. leads the world with 22.6 million coronavirus cases and more than 376,000 confirmed deaths.

TULUM, Mexico — Mexico had a span of two weeks over the Christmas holiday where it seemed like tourism had returned.

Quintana Roo state — home to Cancun, the Riviera Maya and Tulum — received 961,000 tourists during that stretch, down only 25% from the previous year.

But there’s concern the winter holiday success could be fleeting, because it came as coronavirus infections in both Mexico and the United States — the main source of the foreign tourists — were reaching new heights.

The positivity rate of coronavirus tests in the state is nearly 50%. The weekly number of deaths quadrupled from the week before Christmas to the week after, according to federal government data.

Mexico has recorded more than 134,000 confirmed deaths. That’s the world’s fourth-highest death toll, according to a tally by Johns Hopkins University.

MINNEAPOLIS — A former Minneapolis police officer who held his knee to the neck of George Floyd for several minutes will be tried separately from three other former officers accused in his death, according to scheduling orders filed Tuesday.

Derek Chauvin will stand trial alone in March due to the coronavirus pandemic while the other three former officers will be tried together in the summer, according to the orders filed in Hennepin County District Court.

Judge Peter Cahill cited the limitations of physical space during the coronavirus pandemic for his order to split the defendants’ trials. It is “impossible to comply with COVID-19 physical restrictions” given how many lawyers and support personnel that four defendants say would be present, Cahill wrote.

ANCHORAGE, Alaska — Data from the Alaska Department of Corrections show that more than 40% of the people incarcerated in Alaska have been infected with the coronavirus.

TUSCALOOSA, Ala. — Thousands of Alabama football fans partied in streets and ignored coronavirus safety guidelines after their team defeated Ohio State 52-24 for the national championship.

Students and others poured out of jam-packed bars near campus late Monday, traffic cameras and images posted on social media show.

Many of the fans screaming and cheering as they pressed against each other in the street didn’t wear face masks. The scene was exactly what officials feared before the game as they urged people to watch at home and privately celebrate, the Tuscaloosa News reported.

About 404,000 people have tested positive for the coronavirus and more than 5,300 have died in Alabama.

TOKYO — The president of the Tokyo Olympic organizing committee has tried to reassure the public that the postponed games will open in six months.

Two polls in the last few days show just over 80% of Japanese people surveyed think the Olympics should be canceled or postponed or believe they won’t take place as coronavirus cases surge in Japan.

More than 15,000 Olympic and Paralympic athletes from 200 nations and territories normally attend an Olympics. It’s not clear if fans can attend in Tokyo.

Optimism from organizers has been quelled by a state of emergency for Tokyo and surrounding areas declared last week. Japan has controlled the virus relatively well, but cases are rising with about 4,000 deaths in Japan attributed to the coronavirus.